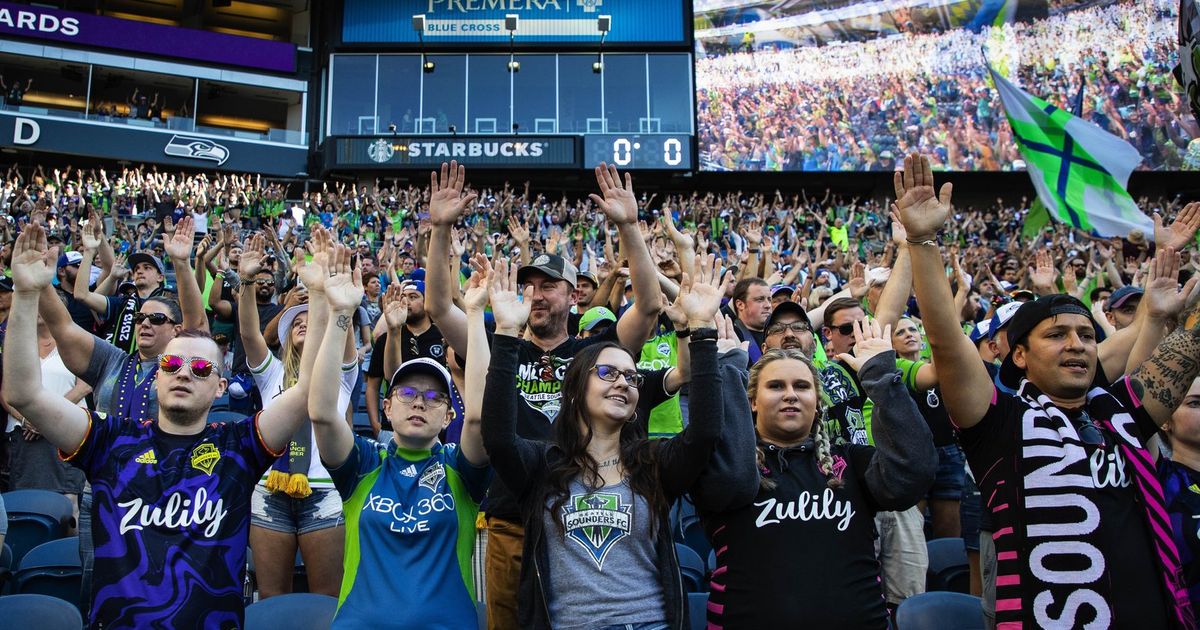 TUKWILA — In following local health and safety protocols, starting Saturday, fans will no longer be required to wear masks for outdoor and indoor settings at Lumen Field for Sounders matches.

A caveat is those seated at field level and field-level club seats will still be required to wear masks and provide proof of vaccination due to the proximity to players. Gov. Jay Inslee announced last month plans to lift Washington’s COVID-19 mask mandate beginning March 12.

Seattle (0-2) hosts the Los Angeles Galaxy (2-0) Saturday. The date is also exactly two years from when MLS — and the sports world — shut down in an effort to help slow the spread of the virus. MLS’s suspension was initially for 30 days and eventually stretched four months, with the Sounders returning to action in July 2020 with an MLS tournament played in a bubble in Orlando.

But, with COVID cases and deaths sharply declining from their January peaks, the country begins to shift into a new normal with fewer masks and mandates. Among those embracing that shift is Sounders keeper Stefan Frei, who says, “It’ll be nice to see people’s faces.”

Going maskless in outdoor settings at Lumen was optional beginning in February and showing proof of vaccination upon entry ended this month.

“It’s been a difficult time for everybody, and I’m still a little bit surprised that people were so upset that we had to wear masks,” Frei continued. “I’m lucky, I didn’t lose anybody during this pandemic and I didn’t even get infected …. I was hoping finding a common enemy would push humans together and what better way than a pandemic that nobody should really bond with. We’ve struggled with that a little bit, so a little self-reflection for everybody would be nice.”

MLS players will still mask up in certain situations, but if an organization is fully vaccinated — which the Sounders are — testing for the virus is no longer required. The team would have to resume tests if someone had symptoms that proved to be COVID or was in contact with someone who contracted the virus.

CONCACAF still requires testing as the continental region continues efforts to stem hospitalizations and deaths. The Sounders’ travel delegation will test for COVID before the second leg of the Champions League quarterfinal Thursday against Club Leon in Mexico.

Sounders striker Fredy Montero is a partial owner of Santo Coffee Co. in the Roosevelt neighborhood that opened in August 2019. He said the small business is just starting to regain footing after an initial shutdown in 2020 and will follow local rules regarding masks.

“It’s a step closer to being normal,” Montero said. “It was a big hit for small businesses, having to adapt to 30%, then 40% and 50% occupancy. Those times are behind us and now we’re excited to get back to normal.”

Sounders majority owner Adrian Hanauer joined Peter Tomozawa, club president of business operations, and Garth Lagerwey, president of soccer and general manager, in penning an optimistic open letter to fans last month. The leadership group wrote this season “may be our most special year yet, and we invite you to be a part of every step.”

“It’s not something we’ve done (in past years),” Lagerwey said of the letter. “It was a real encouragement that as, hopefully, we’re finally getting to the winding down phase of the pandemic, we really want to get everybody back in the stadium. … Understandably, people have had really legitimate reasons to not come back. Hopefully now we’re at a point where we can get a full building again.”

The Sounders played the entire 2020 home slate behind closed doors and gradually welcomed fans back last season, beginning with 7,000 socially distanced in the approximate 68,000-seat stadium for the home opener. Attendance evolved to “vaccinated sections” and ultimately full capacity in July 2021.

But the Sounders haven’t returned to their pre-COVID attendance numbers. The team averaged 40,247 people during the 2019 MLS regular season. The club drew a record 69,274 for their MLS Cup championship win at Lumen in December 2019.

An average of 29,000 people attended the Sounders’ past three matches at Lumen Field, two of which were CCL games against F.C. Motagua and Leon.

In addition to safety, performance could be an issue. The Sounders scored an eye-popping eight goals in the two CCL wins at Lumen. Seattle lost their MLS opener against Nashville SC 1-0 in February.

There’s hope Frei’s advice of “having to mask your disdain a little bit more when you’re not too happy” won’t apply to Sounders matches now that masks are optional at Lumen.

“This country will have to come out of this (restrictions) because COVID is here to stay,” Sounders coach Brian Schmetzer said. “Am I a little more careful indoors? Yes. We can’t afford to have a bunch of COVID cases around here. So, common sense, being safe, all of those things will help this country open up and help get more people in the stands safely. That’s what we’re all aiming for, right?”

Jayda Evans: 206-464-2067 or [email protected]; on Twitter: @JaydaEvans. Jayda Evans covers the Sounders. She offers observations, critiques, and occasional offbeat tales. Evans also has written a book on the Storm and women’s hoops titled, “Game On!”