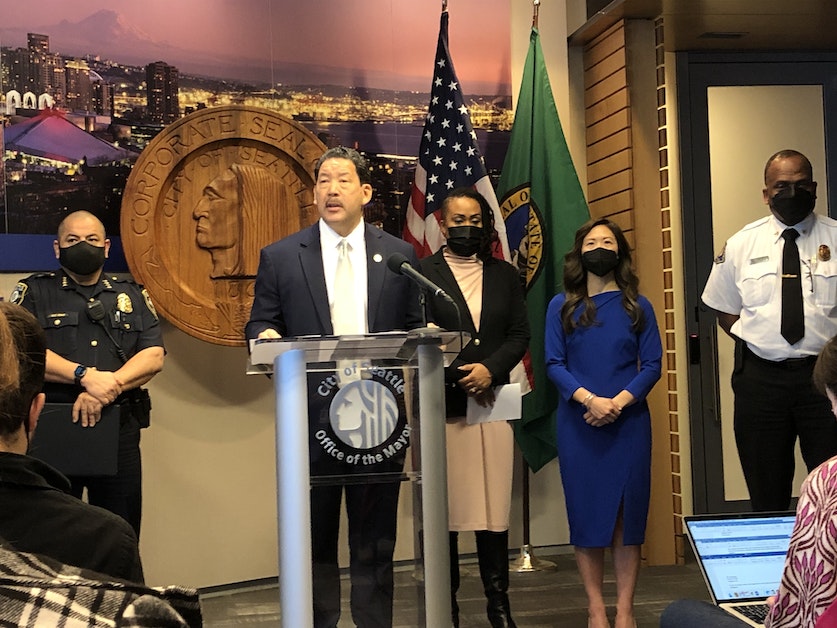 Violent and property crime in Seattle rose in 2021, and local officials are trying to respond. Mayor Bruce Harrell said he’s directed police to focus on violence and disorder in “hotspots” like Little Saigon.

Overall crime in Seattle increased 10% last year compared to 2020. Violent crime in particular rose by 20%, a 14-year high. Reports of homicides and rapes did go down last year, but robberies and aggravated assaults contributed to the overall increase.

Property crime increased by 9%, driven by arsons and car thefts. The Seattle Police Department has a separate category for the theft of car parts, like catalytic converters stolen and sold for scrap metal. Theft of car parts jumped almost 80% between 2020 and 2021.

Mayor Bruce Harrell held a press conference on Feb. 4 focused on public safety, alongside Police Chief Adrian Diaz. Harrell noted these latest statistics and promised to focus on hotspots and repeat offenders. He held up the Little Saigon neighborhood as a case in point. Business owners have announced plans to close and leave the area, saying it’s too unsafe for their employees and customers.

“Working with the community, including the restaurant and shop owners of Little Saigon, our police officers in the first 21 days of January made 23 felony arrests, 14 misdemeanor arrests” and recovered stolen property, Harrell said.

Ann Davison, the new Seattle City Attorney, announced a policy change last week to no longer add to the backlog of thousands of cases that built up during the pandemic (she said she’ll announced plans to address that backlog in the coming weeks). Instead, Davison said her office is now making a filing decision within five days of new cases being referred by SPD. Davison said it’s important for victims and perpetrators to see that “the crime and the response to it is connected, and that’s the piece that’s been missing when you have that long time gap of one to two years.”

Leesa Manion is chief of staff for the King County Prosecuting Attorney’s Office. She said representatives from Home Depot told them that people can easily sell stolen goods online.

“There’s a lot of demand online for tools, and they have suffered great losses from individuals who target their business knowing there’s an opportunity and a high resale demand,” she said.

Manion said one strategy prosecutors are looking at is aggregating multiple incidents of theft by the same person into a single felony charge.

Harrell’s administration must also confront sobering gun violence statistics, including an 80% increase in fatal and non-fatal shootings since 2019.

DeVitta Briscoe is the mayor’s liaison for gun violence prevention. She said Seattle and King County are ramping up the presence of community groups like Community Passageways to focus on locations and people affected by gun violence, to intervene with young people who are at risk, and de-escalate conflicts.

“They will break it for no reason, they don’t even have time to come in or take anything. They just do that, it makes employees feel extremely unsafe,” Lee said. The city has already been matching dollars from community groups in Pioneer Square and the University District to fund window replacement grants.

The roundtable members also asked the city to study any disparities in insurance coverage. Erin Goodman heads the SODO Business Improvement Area. She said businesses in the University District have flagged this as a particular problem.

“Businesses have been told they don’t qualify for insurance simply because they operate in the U District and it’s not a safe area,” Goodman said. “This is unacceptable. Access to insurance is a key part of running a business.”

Pipo Bui, the co-founder of Seattle Coffee Works, told the council during public comment that her cafes have been broken into, looted and set on fire, and employees have been punched in the face. But she asked the city to be thoughtful in its approach to crime.

“You’re already starting to diminish these kinds of behaviors with more social workers, mental health support, bike patrols on the street, and attention — thank you,” Bui said. “I hope that you will continue to do so with humanity and compassion. We know these people — and most of them, including those living on the street — do not commit these bad behaviors.”

Bui asked for more grants to help businesses rebuild when they’ve been damaged. She also urged people working from home to “turn off their computers” and come out and support neighborhoods and local businesses.

Business owners said having more activity on the streets will help deter crime.