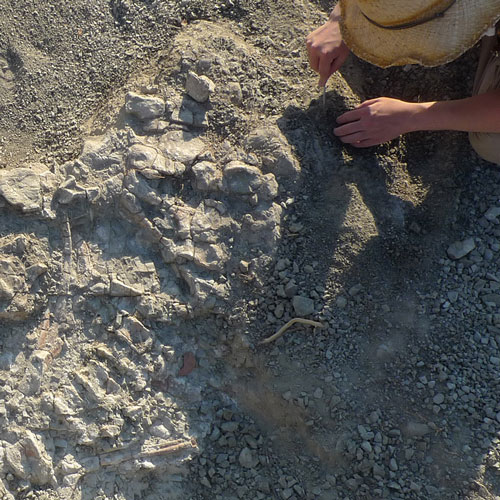 Christian’s team discovered fossils from 10 million years after the mass extinction that reveal a lineage of animals that led to dinosaurs in the mid-Triassic period (237 to 247 million years ago), many millions of years before dinosaurs have been found in the fossil record elsewhere on Earth. Archosaurs, a group of reptiles that includes crocodiles, dinosaurs and birds, were in Tanzanian and Zambian basins, but not distributed across all of southern Pangea as had been the pattern for four-legged animals prior to the extinction. Archosaurs led to animals like Asilisaurus kongwe, a dinosaur-like animal, and Nyasasaurus parringtoni, a dog-sized creature with a five-foot-long tail that could be the earliest dinosaur.

Most vertebrate fossils are known from a very limited number of places on Earth, so Christian’s goal of understanding the geographic complexity of extinction and recovery is a big one. The Zambian and Tanzanian fossil beds preserved both plants and animals, which is unusual, and provides information on paleoclimate before and after the extinction. In addition, members of his group are analyzing the stable isotopes of fossil soils as another estimate of ancient climate. Mass extinctions have unpredictable consequences, but looking at the past can shed light on how life on Earth responds to cataclysmic events.