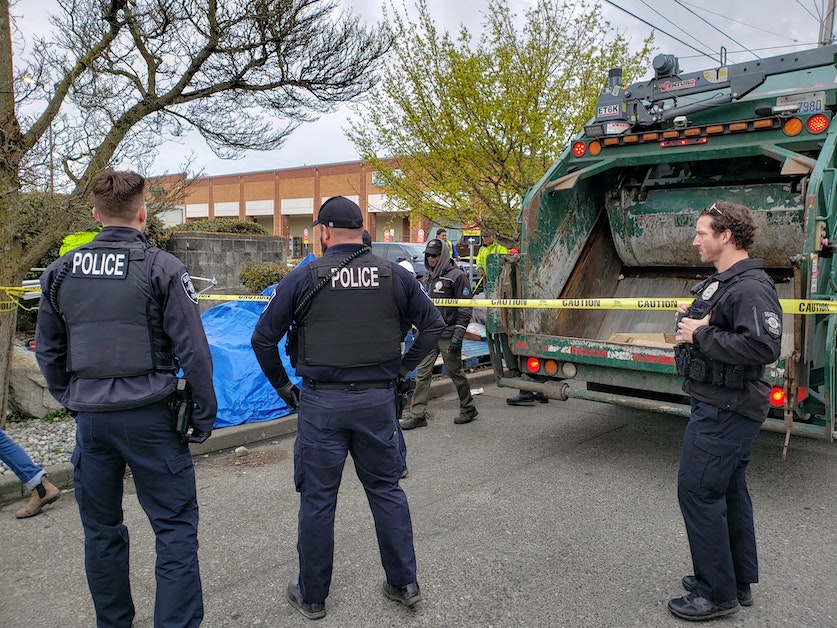 About two dozen people experiencing homelessness in Ballard were displaced this week by the City of Seattle. Tent encampment sweeps have picked up around the city heading into summer, despite insufficient housing or shelters available.

On Friday morning before 9, as is typical for these encampment clearings, Seattle Parks and Recreation employees stood at the corner of 14th Avenue NW and NW 54th Street in Ballard with an idling dump truck nearby. Multiple Seattle Police officers, who are in the middle of a staffing shortage, silently stood guard waiting to assist Parks crews.

People who were surviving in tents and makeshift structures along NW 54th scrambled to gather some of their personal belongings before city employees moved in. At least 20 peoples’ shelters have been here and along the adjacent streets for years. Some of the structures included small porches, shingled roofs and decorative plants outside.

One person stood and cried as they watched Parks & Rec employees take a sledge hammer to their former home. That person, and their two cats, were driven to a hotel paid for by volunteers with the mutual aid group, Transit Riders Union. Like a handful of others at this location, this person said they had already been swept by the city before, most recently from Ballard Commons park in December.

In Ballard the City of Seattle is starting to clear the second homeless tent encampment in as many days. At least 12 people surviving in tents here will be forced to move despite there not being enough housing or shelter space available in Seattle. pic.twitter.com/1itLP9xXAa

Another person, who just gave his first name, Darrell, said he did get successfully referred to a tiny house in the Othello neighborhood. But he was unable to take a wooden planter of flowers on his Ballard home with him to his new location.

“What other choice do I have?” he asked before a volunteer drove him away.

Two port-a-potties were driven to the location during Friday’s clearing. Toilets and hand washing stations are two things that people at these encampments say they’d like to see more of. However the toilets on Friday were only available for city employees, according to a Parks worker.

It is unclear exactly how many people on Friday were referred to temporary shelter by outreach workers. With tens of thousands of people in King County experiencing homelessness, there are not nearly enough housing or shelter options available for every person who needs it.

This was the second homeless tent encampment in Ballard cleared by the city this week. On Thursday about a dozen people were removed from a row of tents next to a grocery store off NW 85th Street in Crown Hill. There were reports of fires at the Crown Hill encampment and one person said they didn’t always feel safe in a tent there.

A spokesperson for Seattle’s Human Services Department wrote in an email that four people at the Crown Hill location were referred to temporary shelter at The Bridge Care Center. One person was set up with a tiny house on Thursday and five others were referred to shelters earlier in the week, according to HSD.

Happening now in Ballard: Seattle Parks crews and SPD are removing about 8 people surviving in tents. At least 5 police officers are here standing around. 2 people so far have been referred to temporary shelter at The Bridge Care Center. pic.twitter.com/ERPtvY63Wd

Seattle Police were also present at Thursday’s clearing with about 10 officers standing around. Housing advocates say waking up people who are experiencing homelessness in the early morning cold with guns and badges is traumatic and can cause people to not seek out city services.

At one point on Thursday a few of the officers ate hot food given to them by a nearby business owner. Meanwhile a person with a tent under their arm argued with a Parks employee who had just thrown onions and canned food into the dump truck.