My family was recently invited to staycation in Seattle at the Hilton Seattle—a perfect home base for a Seattle Kraken hockey game. The Seattle Center Monorail (and other public transportation) is included with a hockey ticket and it’s just a 15 minute walk from the Hilton Seattle Hotel to Westlake Center to catch it for a short fun ride to the game. Xi’an Noodles at Westlake Center is a great stop if you want to grab a quick bite before you get to the arena (my favorite is the tomato and egg noodles) and the matcha ice cream at Matcha Cafe Maiko is really delicious—you can even get it with gold leaf on top.

I have 13 year old twins and they thought it was cool that Climate Pledge Arena has two jumbotrons known as “The Twins.” My family was also amazed by a giant wall of live plants in the arena and we spent some time learning about the sustainable goals that this place has over the next few years. I did not know that we have the “greenest’ ice in the NHL—the arena roof water is collected in a 15000 gallon cistern to make the ice in the arena. And we loved seeing so many recognizable local flavors at Climate Pledge Arena  like Lil Woody’s, Macadons, Treat Cookies and so many plant-based options like Impossible Burgers and plant-based chicken nuggets too.

The Pacific Science Center is also hosting a new exhibit about hockey if you want to learn more about the background of the sport and try out hockey skills like slap shots and stopping shots on goal. Hockey: Faster Than Ever will be at the Pacific Science Center until Feb 27, 2022 and the adults in our family had just as much fun learning about hockey at this exhibit as the kids. We are so lucky that we have a hockey exhibit in Seattle just as we’re all getting to know about this new sport for our city. It’s also open until 8pm Monday through Friday so it might be a good stop for new-to-hockey Kraken fans before their first game.

It also seems like we are getting more poutine in our city as well. Because poutine is such a favorite hockey snack, we’ve been searching it out in Seattle. So far one of our favorites is a vegetarian one we’ve found on the menu at Mamnoon Street in the South Lake Union area which is also a great place to hang out if you have time before or after a hockey game. And if you’re a poutine and hockey fan, you can head to the Angry Beaver a little north of downtown where there are many varieties of poutine on the menu too. And of course, Climate Pledge Arena also has poutine (a foraged mushroom one at Market Hall) so we’ll definitely have to search that out next time we go to a game.

Terumi Pong is a Seattle family travel writer and phone photographer who grew up in Vancouver, B.C. She is mom to twin boys and a yorkie poo pup named Scout and spends most weekends in the mountains with her family. 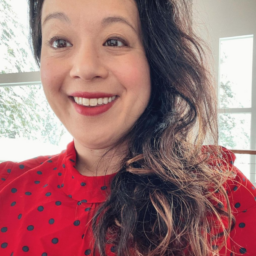