That’s right. After a 3.5-year hiatus from Seattle Center, the four-time WNBA Champion Seattle Storm opened its 21st season, facing against the Minnesota Lynx at Climate Pledge Arena on May 6. The Storm had bounced around different Seattle venues while their home court was transformed from classic Key Arena to a new, state-of-the-art facility and this evening was their triumphant return.

Live sports are best enjoyed with friends, and I took two of my favorite women, Chinela and Paige, with me. Always one to turn an event into a proper evening, we started at Buckley’s in Queen Anne. The energy from the gathered Storm fans was palpable. This place is my go-to for events at Climate Pledge Arena and I’ve seen a lot of different types of crowds in there, but the sheer excitement and joy for the game was so fantastic to be a part of. 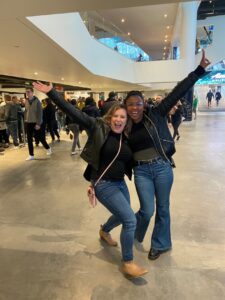 After paying our tab, we joined the crowd of fans headed towards the Arena. People lined up early to get inside, as this was the first time many people had been inside Climate Pledge Arena, which just opened in October 2021. We joined the queue and quickly made our way in, flashing our digital tickets at the electronic scanner as we entered. Once inside, we found ourselves in the massive Alaska Airlines Atrium. Featuring 21,000 square feet of glass and 8,600 feet of skylight, the Atrium is an impressive welcome with an Alaska Airline’s tail hanging above it all.

We headed down the escalator towards the lower bowl seats, where the majority of the 5,400 fans sat. The main concourse offered team swag stores, beverage outlets, and several great food options, including Din Tai Fung, Bristol Bay Wild Market, local favorite Lil Woody’s Burgers, and even the Impossible Market for the meatless fans. I didn’t set it up in advance, but four of the outlets use Amazon’s Just Walk Out tech, which means you can grab your food and head past checkout without stopping and your meal will automatically be charged to the credit card linked to your account. Fried chicken sandwich and no wait? Yes please! 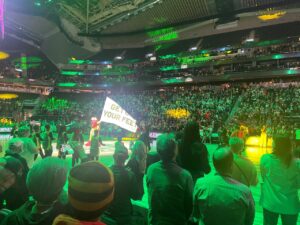 I’m a huge fan of spectacle and didn’t want to miss any of the warm-ups. We made our way to our seats and about 20 minutes before tip-off, the Storm hit the court for warm-ups. Holy cow, it’s great to have them back home! The pre-game festivities continued as the clock made its way to zero. The Storm emcee, Shellie Hart, got the crowd motivated and the DJ, Trunks, spun tunes to keep the energy up. The team mascot, Doppler, moved around the seats, high-fiving young fans and snapping selfies.

As both teams took the court, the lights went down and the cheers went up. People were on their feet for the announcement of the starting lineup, including the GOAT herself, Sue Bird. She has her entire 21-year career with the Storm and the crowd thanked her for her dedication to the city with thunderous applause. 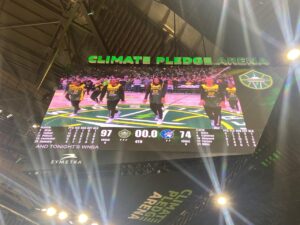 If you want to look like a true fan, follow the crowd’s lead. From tip-off to the first Storm basket, everyone was on their feet. Only after those first points hit the board were we allowed to sit down. A little standing didn’t bother though; the energy from the fans was fantastic. People came decked out in team gear, brought homemade signs in support of their favorite players, and cheered passionately when the Storm had the ball. The loudest cheers, though, were reserved for the Storm Dance Troupe, a group of kids between the ages of 5-15 who performed choreographed routines during the time-outs. 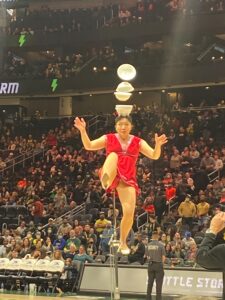 The first half was tight, ending with a tied score as the teams headed off for the locker room. Remember that spectacle I said I loved? The half-time entertainment was Red Panda, a unicycle-riding, bowl-flipping acrobat who defied all logic by popping not one, but SIX BOWLS to the top of her head using one foot while riding a unicycle seven feet up in the air. And she’s been doing this for over 20 years! Mind blown.

The teams came out of their locker rooms and the second half began. The Storm turned on the gas and built a sizeable lead over the Lynx. By the time it was all over, the final score was 97-74, Storm win. 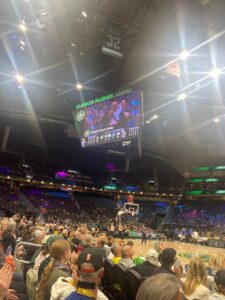 It’s always nice to get that W, but Chinela, Paige, and I agreed that the best part was the shared experience inside the arena. The crowd was diverse and they were there to support their team. It was family-friendly, LGBTQ+-friendly, women-friendly, and athlete-friendly. The gameplay was fast and the environment was loud. I didn’t once hear some lame joke about women playing sports, because we were all there to watch these athletes—several of whom have played for the US Olympic Basketball team—dominate at the sport they love.

The crowd stayed until the end, and as we filed out, the twin jumbotrons promoted the next home game. You better believe I’ll be back. 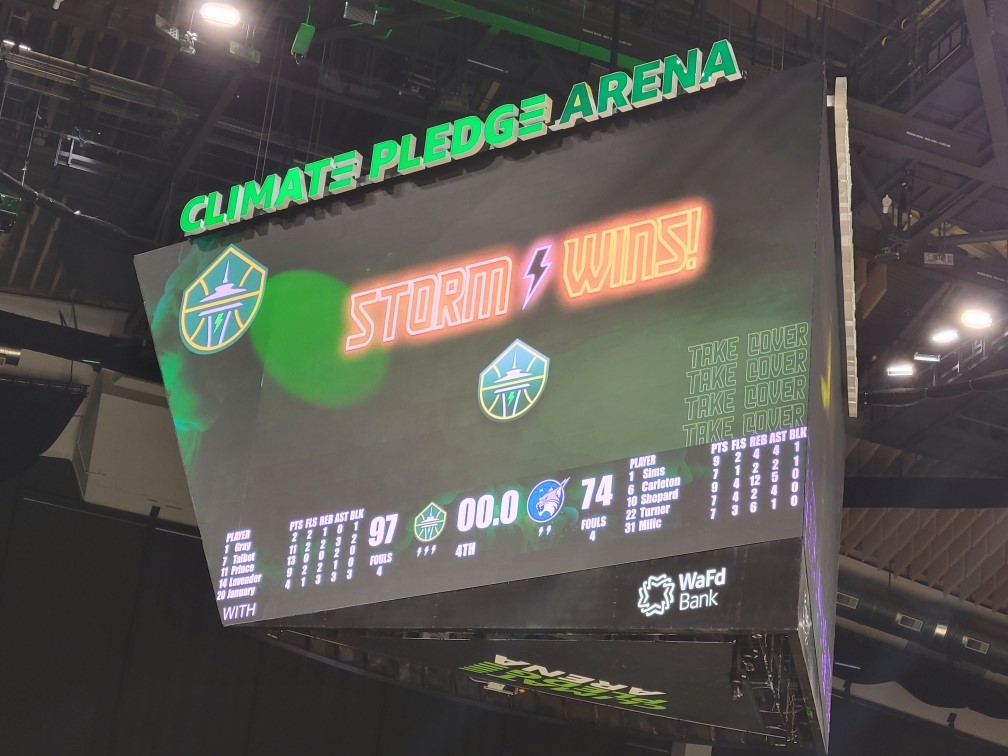 Liz Johnson is Director of International Tourism at Visit Seattle. She is a life-long athlete who is just as happy in the stands, cheering on Seattle professional sports teams. Her favorite game-day snack is a Seattle Dog from a food cart on the way to the event—the cream cheese and grilled onions taste like sports.