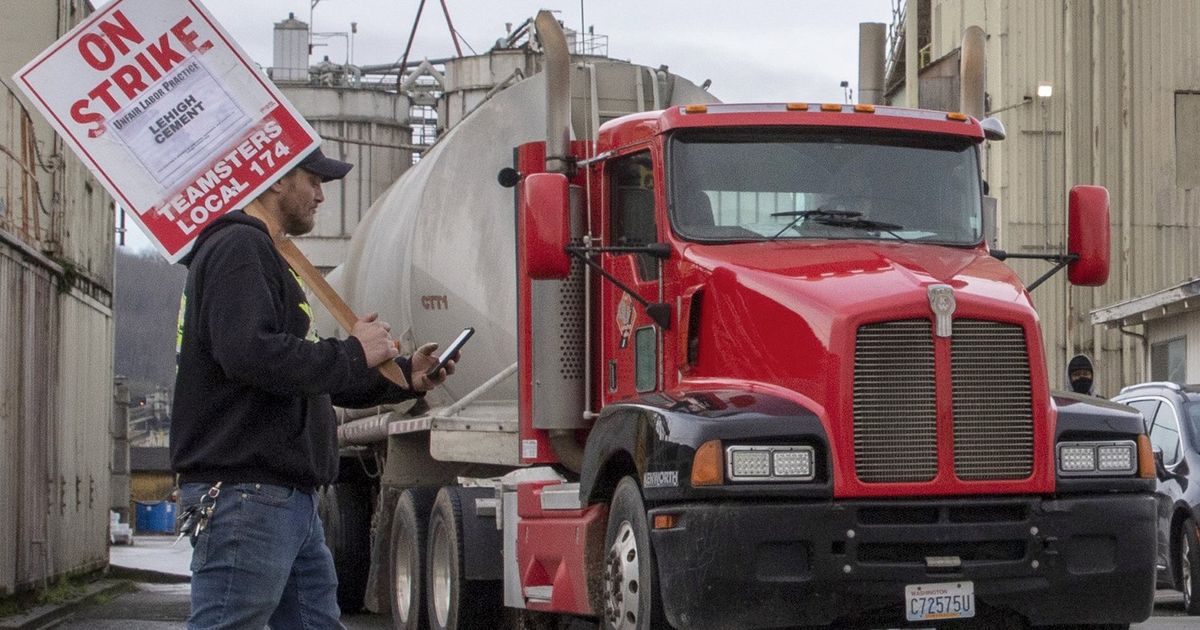 After months on strike, some Seattle-area concrete mixer drivers could return to work this week. But they still have not reached a deal with their employers.

Teamsters Local 174 offered to return to work as soon as Tuesday at three of the six Seattle concrete suppliers where workers are on strike. Negotiations would continue.

A spokesperson for the concrete suppliers issued a statement saying only that “the Union can return to work at any time and does not require Company approval for this return. The companies remain legally obligated to continue bargaining with the Union for a new agreement even if the strike ends.”

The strike of about 300 drivers has dragged on for months, slowing public and private construction jobs across the region. The local construction industry has increasingly turned to nonunion companies and replacement workers.

While the two sides have clashed on wages, union officials say negotiations have stalled because the companies refuse to bargain in good faith or meet demands that the retiree medical plan be improved. The companies have said they are bargaining in good faith and have called the existing retiree plan “generous.”

The union did not agree to return all of its members to work because “we are not giving up,” spokesperson Jamie Fleming said. “This is not us accepting their offer — absolutely not. This is just us making sure that the community and these major projects are getting concrete from people who know what they’re doing.”

The union could not say how many drivers would return to work and whether that would indeed begin Tuesday.

It could take several days to know how many drivers will return to work. In a response to the union Monday, Salmon Bay Sand and Gravel said it legally has five days to “process the orderly reinstatement of the strikers” and would be in touch “in the very near future,” according to a copy of the letter shared by the union.

Developers and contractors who’ve faced project delays because of the strike also weren’t sure what Tuesday might bring.

“There is still a lot we don’t know about what this means, and we have more questions than answers right now,” said Bill Ketcham, general manager of the Seattle office of Turner Construction.

At the downtown convention-center expansion, delays could continue because the developer’s subcontractor has a contract with one of the suppliers the Teamsters didn’t name in their offer Monday, said Matt Griffin, principal at Pine Street Group. “So, we’re not sure what it means for the convention center,” he said.

Still, the move “does make me hopeful,” Griffin said.

“People talking about going back to work and people worrying about the community is a step in the right direction,” he said, adding later, “obviously we have our project, but I worry about the people out of work, and I worry about the housing. We’re short on housing.”

“Is it the magnitude we need to get back to normal?” Ketcham said. “No, but it’s a step in the right direction.”

King County Executive Dow Constantine, who has been critical of the concrete suppliers, said the Teamsters’ offer “could help critical projects get back on track while negotiations for a three-year contract continue.” Constantine called on the suppliers to “return to the negotiating table, secure a fair and long-term contract, and get our region moving again.”

Sound Transit, whose contractors have turned to non-union concrete, did not offer details Monday of what the union’s move meant for its light rail projects.

“Sound Transit welcomes any action by the parties to restore critical deliveries of concrete for projects around the region. We encourage the parties to continue the negotiation process in good faith to reach an equitable agreement to permanently end the strike,” spokesperson John Gallagher said in a statement.