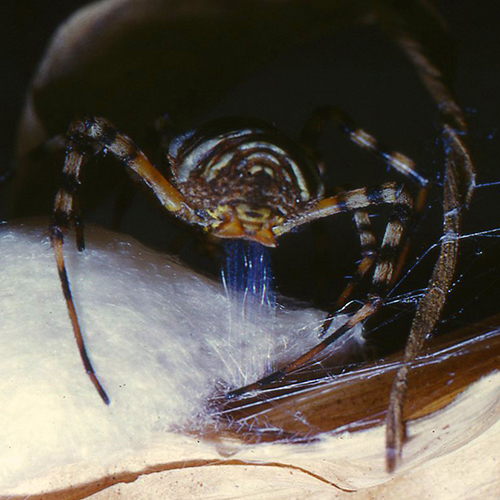 After service in World War II, J. Robert Thomson (1922–2002) married (he eventually had five children) and first pursued a career in classical music, conducting symphonic orchestras, before abandoning that for teaching in the early 1960s.

Bob became interested in collecting, rearing and photographing spiders in his earlier forties, around 1963. He soon encountered the sad lack of any spider ID resource for beginners, so he decided to concentrate on photography and leave the ID to others. For North American spiders, the “others” eventually became me.

From 1964–1966, Bob collected Northwest spiders while he taught school at Rainier High School in rural Thurston County, Washington, and lived in a rented farmhouse. This was his most productive period of Northwest spider collecting, and for a long time this remained the largest local spider sample in the Burke’s Arachnology collection. He was still learning spider photography, but one of his brilliant achievements during this period was a complete series (at least three rolls of film) showing Argiope trifasciata constructing her egg sac.