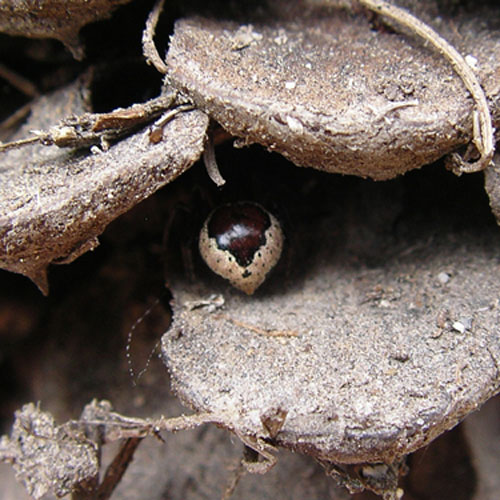 As it turns out, no spider species were previously recorded as collected from pine cones. Discovering a new spider species is relatively common, but discovering a whole new spider habitat—that’s really something! Some spiders evidently live in pine cones long-term, while others just use them to molt, lay eggs and rest when not out hunting. Or they wander in at random like that first one Laurel saw back at Swauk Prairie.

The spider we most commonly found in Washington pine cones was Euryopis formosa, a beautiful creature with a dark heart shape inside a bright silver patch on the abdomen. Sampling pine cones more than quadrupled the number of E. formosa specimens in the Burke spider collection—it was found at 47% of sampling sites!

This was the first study to describe the spider fauna of fallen pine cones and now there are 89 species recorded in our published paper, including two species never found in Washington state before. Spiders are everywhere—even in pine cones!

To learn which spider species use fallen pine cones, read our study published in Western North American Naturalist (PDF). Interested in more about arachnids? Visit the Burke’s Arachnology + Entomology Collections page or the Spider Myths website for myths, misconceptions, and superstitions about spiders.