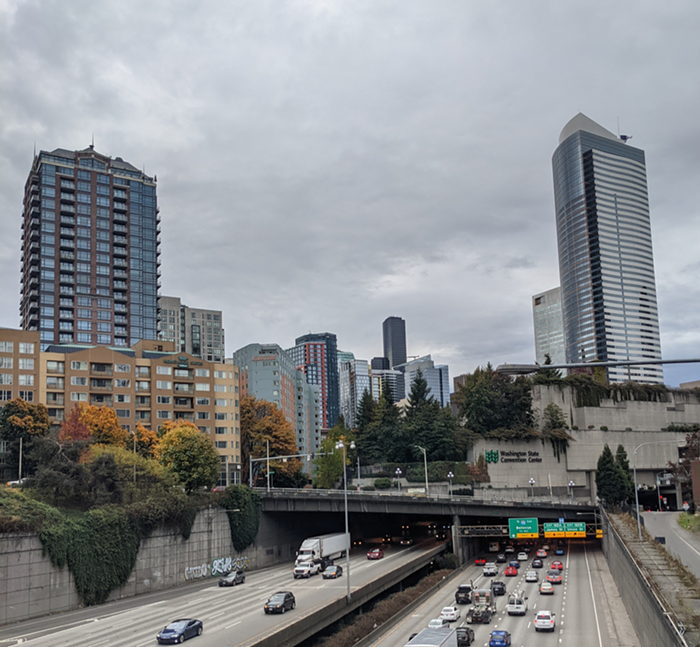 A headline that is filled with nothing but good news: “One of Tacoma’s most popular drives to close to cars forever.” This is the Five Mile Drive on Point Defiance. The reason the park has been liberated from the most awful mode of transportation ever is that the roads in the park just can’t support their shit any more. Tacoma News Tribune: “The decision to permanently close the outer loop of Five Mile Drive to vehicles was made after a geotechnical assessment earlier this year identified ‘ongoing erosion and slope instability impacting the bluff.'” How wonderful. The pedestrians and bikes. And the trees, the smell of the trees, and the smell of the surrounding sea. No revving, honking, fuming. You got it, you got it.

By the way, the number of people killed on US roads in 2021? 42,915. According to ABC News, that’s “the highest number in 16 years,” and it is “a 10.5% jump over 2020 [which accounts for] the largest percentage increase since the National Highway Traffic Safety Administration began its fatality data collection system in 1975.” That’s not all. Traffic deaths in 2019 (in short, before the pandemic), were 36,355. The pandemic appears to have put this way of exiting the world in warp drive.

Washington State Department of Transportation data shows that commutes that took 25 minutes during the pandemic now claim “45 minutes to an hour” of the only life you will ever live. Forty-five minutes to an hour in a car. And many of those minutes were spent hardly moving or not moving at all. We work so hard, spend so much money, to make ourselves sad.

Accompanying the rise of deadly car accidents is the tons of garbage rising on our roadsides.

We’ve been teaming with @EcologyWA, Dept. of Corrections & Adopt-A-Highway volunteers to try to catch up on the huge amount of litter & graffiti on highways. Just this spring crews have collected more than 200 tons of litter from state roads. pic.twitter.com/NeHJHK1ysR
— Washington State DOT (@wsdot) May 16, 2022

We always knew that the US’s commitment to the environment was as phony as the tears of Iron Eyes Cody, an Italian American playing a Native American.

An earthquake with a 3.6 magnitude rattled little Oso, Washington last night. It is said that some of the people there really felt it. The ground itself shook them out of sleep, and as they entered that confusion of vaporizing dreams and the consolidating real, the worst must have been feared. Were they feeling and hearing a repeat of what happened in 2014? Would they add a new layer to the dead who were already buried by mud? But the shaking stopped and the mud in the area stayed in its place. It was just a night on earth.

It looks like Boeing, a company that abandoned Seattle for Chicago, and is now abandoning Chicago for the DC-area (follow the money, they say), finally got a spot of good news. The information on the blackbox of the Boeing 737-800 that crashed in China back in March points to an intentional nosedive, according to the Wall Street Journal:

The information gathered so far in the China Eastern probe has led U.S. officials involved with the investigation to turn their attention to the actions of a pilot, people familiar with the matter said. There is also a possibility that someone else on the plane could have broken into the cockpit and deliberately caused the crash, these people said.

Because we decided to live with the pandemic rather than beat it and save lives, King County is closing three of its COVID testing sites. Demand has fallen with funding for tests. People want their American way back. That sort of thing

The Food and Drug Administration gave a thumb to the Pfizer-BioNTech booster shot “for children between the ages of 5 and 11.”

Though Russell Wilson and Ciara are gone (to Denver), they’re still keeping it busy in Seattle. The famously beautiful couple opened a second fashion store in the city of the heartbroken 12s. When will this humiliation end? Open your damn stores in Denver. Leave us alone. Give us the respect of licking our wounds in peace. Puget Sound Business Journal: “Russell Wilson’s Bellevue estate may be on the market following his trade to the Denver Broncos, but his retail footprint in the Puget Sound area is still expanding.”

No. This is one of the greatest springs I have ever experienced in this city. And I have lived here for 30 years. And how I hope the summer is as cloudy, as rainy, as cool. As I have said before, I did not move the Pacific Northwest from Africa for the sun. I’m not a lizard. I do not need heat to get things going.

Boston Properties buys the Madison Centre office tower for $730 million: “It’s the largest multi-tenant office sale in the nation so far this year, according to the listing brokerage,” writes Marc Stiles of the Puget Sound Business Journal. The death of downtown has never felt closer.

What do you see when you look at this? A door, of course. But here is the problem. The door is on Mars.

With that, I’m feeling the end of this PM should be a beat produced by the Austrian Waldeck, “Moon.”
Article Source: https://www.thestranger.com/slog/2022/05/17/73503127/slog-pm-tacoma-park-goes-carless-tower-in-dying-seattle-sells-for-730-million-a-door-seen-on-mars