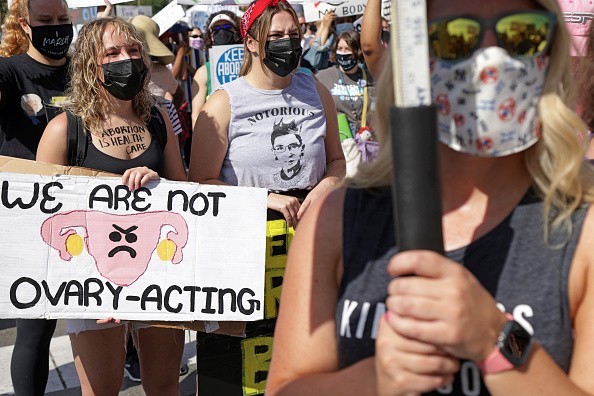 Fuck Idaho! All my homies hate Idaho! Okay, Idaho the state is fine and the people are just like any other people, but the abortion laws are NOT COOL.

Idaho Governor Brad Little signed a bill that bans nearly all abortions after approximately six weeks and lets family members sue abortion providers, similar to recent legislation in Texas. Senator Patty Murray said that this isn’t just bad news for people with uteruses out east—it’s also Washington’s problem. Even before these new restrictions, people seeking abortions would come to Washington, which provides pregnant people with some of the strongest abortion freedoms in the country. For example, if you live in Idaho and you find out about a pregnancy later than your state-determined pre-six-week ban, you could hop over to Washington. Seattle clinics offer some of the latest term abortions in the country. With other states punishing those stuck with unwanted pregnancies, Washington could become a hotbed for abortion tourism.

Catching up with Matt Shea: Is former state representative Matt Shea raising a child in Ukraine? These are the questions that keep us up at night. The Spokesman-Review has the latest of this saga.

Go back to driver’s ed: During an early stage of Seattle’s latest effort to get cars to stop killing pedestrians, the Seattle Department of Transportation (SDOT) installed two “report cards” at crosswalks in the High Point neighborhood. The math isn’t perfect — SDOT is manually counting 25 drivers a week to calculate the rate drivers stop for pedestrians. So far, the cars would flunk out of the class. The Urbanist reported that cars at SW Morgan Street and 34th Avenue SW scored a cool 46% the first week of the program. The next week, the cars only scored 28%.

These workers and their rights: Today, buyers, associates, and fashionistas at the Capitol Hill Crossroads voted unanimously to unionize. The workers will be represented by UFCW 3000. Lately it seems like everyone and their mother are unionizing, striking, or otherwise building worker power. I would give you a rundown, but lucky for you, we have a weekly labor round-up that can fill you in on how the little guy is standing up to the bosses. It comes out on Fridays.

Hey, look, a Democrat actually trying to get reelected: The state democrats are having a bit of a retention issue — which you’ll remember KHT discussed in her op-ed — but it looks like Rep. Jessica Bateman wants to go back in January!

After some much-needed restoration I have decided to run for re-election to retain my seat in the legislature. I am committed to fighting for fair and sustainable tax reform, equitable healthcare for all, protecting our environment and ending our housing crisis. pic.twitter.com/aW1c2bfFgR
— Rep. Jessica Bateman 🇺🇦 (@jessdbateman) March 30, 2022

Task force against weed theft: King County Councilmember Reagan Dunn is sick of everyone picking on the cash-only pot shops. To put a stop to a wave of robberies at dispensaries, Dunn proposed a task force, which we all know is historically the best, most efficient way to deal with any major issue. The Capitol Hill Seattle Blog has more.

Please remain calm: All levels of government eased up on the pandemic safety precautions, fine with letting the ongoing pandemic do her thing, and now she is, shockingly, doing her thing. The Seattle Times reported that COVID-19 cases are rising in King County, according to a Department of Health (DOH) briefing. The DOH is keeping a close eye on the problem, but Dr. Jeff Duchin, King County’s health officer, said we shouldn’t panic just yet. So far the increase is small.

Omicron 2, the squeakquel: The sub-variant of Omicron is now officially whooping the first Omicron’s ass. Less than a month ago, the BA.2 subvariant of the COVID-19 omicron variant accounted for less than 8% of infections in Washington, but now, it’s the most dominant strain statewide. DOH officials encourage you to put on a mask. The sub-variant was less than pleasant for Europe and Asia.

KOMO encampment fire arc: This morning a Ballard encampment caught fire. Based on this tweet, it looks like neighbors told KOMO that the propane tanks unhoused people use to stay warm exploded. Propane tanks and other unconventional ways of not freezing to death at night are extremely dangerous. Luckily no injuries were reported at this morning’s incident.

Seattle is dying and also on fire: KOMO reported that Seattle firefighters have already responded to hundreds of fires at encampments this year. So far, the numbers are lower than the last few months of 2021 when the city started to keep track. In any case, KOMO reported the large numbers without any context as to why these fires happen, but hey why would you when the truth doesn’t fit your narrative that homeless people are lawless and dangerous?

Taking a step back: Bruce Willis’s family said on social media that the Die Hard actor will step away from his acting career after getting diagnosed with aphasia. Aphasia is a cognitive disorder that affects a person’s ability to express and understand written and spoken language. Treatment helps, but aphasia cannot be cured.

Happier Hollywood news: Elliot Page stars in The Umbrella Academy, a superhero drama based on Gerard Way’s comic. When Page came out as trans in December 2020, Netflix updated his name in the show’s credits, but made no announcement for the future of the show. Today, Page finally broke the news that his character will now be “Viktor Hargreeves.”

Elliot Page said his character in the Netflix show “The Umbrella Academy” will come out as transgender in its next season, mirroring the actor’s own experience after coming out himself in 2020. https://t.co/5ltZmTRR4a
— HuffPost (@HuffPost) March 30, 2022