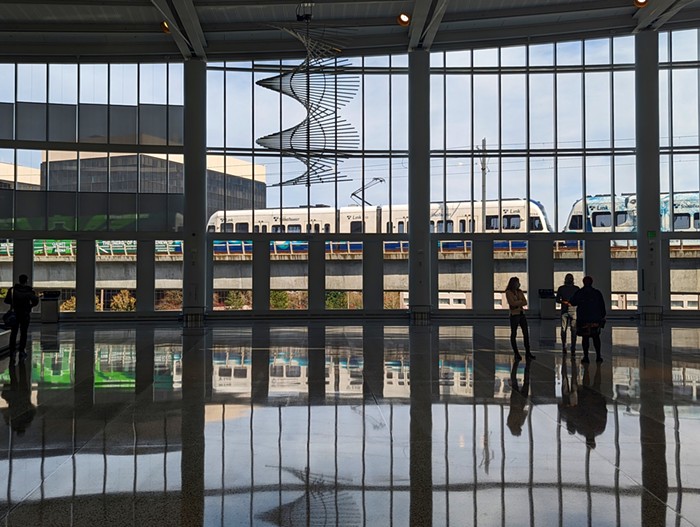 The train is so close but so far… Charles Mudede

The fans of Seattle’s professional sports are much like the inhabitants of a planet cursed with three suns. The moments when things are going very well are met almost immediately with moments when things are going very badly. There is no consistency. No stability. No predictability. There are just these wild and mentally grating swings. And, yes, if you are sniffing a reference somewhere in the previous sentence, know that I’m presently under the spell by the science fiction Cixin Lui.

Since I tweeted this @Mariners have gone 2 and 10 and slipped to 3rd in AL West. Run differential of +1. I accept responsibility. https://t.co/mmVnljqJei
— Jim Brunner (@Jim_Brunner) May 10, 2022

Bill Gates, the billionaire anti-vaxxers love to hate, has tested positive for COVID. He claims that, so far, the symptoms are mild. He will live through this.

Sea-Tac’s international arrivals section is now fully up and running. The project cost nearly a billion bones and features an impressive amount of art, some of which twirls hypnotically in the air or brightly pops up over baggage carousels or is encased in glass. The goal of the art, curated by Port Senior Art Program Manager Tommy Gregory, is to capture the spirit of the Pacific Northwest. SOM, the old and famous and Chicago-based architecture firm that designed the building, featured a lot of wood fixtures and textures in passages that lead to the main area. I also heard from someone in the know that the escalators will not break down like the ones in the Link stations.

According to Seattle Times‘s transportation reporter, the second-biggest thing for the person who replaces Sound Transit’s departing CEO Peter Rogoff “must tackle” is broken escalators. They will also “be responsible for a finance plan, often beset by inflation and past estimating errors.”

Maybe there is a god. But He is not always there for you. It’s a sometimes-here-sometimes-not kind of God. Roosevelt Station is presently in the glow of the God who is here for now, a God who wants you to go up the escalator and make you a believer.

Thanks to the workers on site yesterday who made it happen: all escalators are, finally, fully operational at Roosevelt Station. pic.twitter.com/nKIQ9vqtNc
— Roosevelt Station (@RoosieStation) May 10, 2022

The utter barbarism of devoting so much beauty to cars that do not even move. Car culture is the world turned upside down. Puget Sound Business Journal‘s Marc Stiles has the story: “New-to-Seattle company takes on management of Gonzaga-owned garages.” Ed Danyluk, regional vice president of Platinum Parking North West, told Stiles: “Parking is a valued service. It’s something that people might not always appreciate paying for, but they appreciate being able to get to where they need to go quickly and efficiently.”

He ran for mayor last year and lost partially because he could not hide the fact that he was once a lobbyist for oil companies. Now he, Casey Sixkiller, has been picked by the Biden administration to be EPA Region 10 Administrator. This position covers EPA “operations in Alaska, Idaho, Oregon and Washington state, with its main office in Seattle.” Nothing in the world can save this world of ours.

Breaking news from Hannah Krieg: Despite meetings upon meetings of squabbling, Seattle City leaders always more or less agreed that they should let the Seattle Police Department give out hiring bonuses as means to improve retention – even though a city study indicated that they really don’t know if that money will do what they want it to do. Today, the council’s Public Safety and Human Services Committee finally put hiring incentives to a vote. The committee approved Councilmember Sara Nelson’s virtue signal that said the council would support a staffing incentive program by modifying or lifting the proviso on SPD’s salary savings. Committee Chair Lisa Herbold tacked on an amendment to only release funds in the amount necessary to implement a staffing incentives and recruitment support program rather than giving the cops a blank check. The whole committee voted yes on the amendment and everyone but Councilmember Teresa Mosqueda voted yes on the resolution.

Here’s a snapshot of her budget-conscious argument:

Mosqueda will vote no on the underlying legislation: we have a budget gap and the money under proviso could be used better elsewhere instead of a one-time fix that supplements a department that the council has already accommodated in literally every way.
— hannah krieg (@hannahkrieg) May 10, 2022

No, the council would not give new money, but the money is under proviso so it could go back in the pot and be used elsewhere. The committee also passed Herbold’s bill that asks the city’s department of Human Resources to develop a policy to provide relocation benefits to a whole bunch of city jobs with cops getting priority. SPD could use $650,000 for relocation expenses and to hire a recruiter. Nelson added an amendment to increase SPD’s recruitment advertising and outreach budget by $350,000. The committee voted to pass the bill as amended by Nelson. Mosqueda was the only committee member to vote no, arguing for the sake of our city’s tight budget.

Back to me: They are described as an Auburn couple. He is Bernard Ross Hansen. She is Diane Renee Erdmann. They look very suburban, if you know what I mean. In July 2021, they were “convicted of multiple counts of mail and wire fraud in July 2021.” On April 29, the couple skipped their sentencing hearing at a federal court and fled their Auburn home. But for reasons that are worth examining if time and resources were available, they got only as far as Port Townsend, where they stayed at Hadlock Motel, which is pet-friendly and has a picnic area. Forgive me for saying like it is, but this motel is rather drab and also not really in the lovely town of Port Townsend, with its views, Victorian homes with their haunting widow’s walk, and superb French restaurant Finistère. It’s instead in Port Hadlock-Irondale. In short, it is to Port Townsend what Auburn is to Seattle. The two were captured today, which was sunless and rainy in those parts.

Let’s exit the PM with the impeccable house smoothness of “When U Go” by the Girls of The Internet. This is how you do a tune.