Suzette Smith, an editor at The Stranger‘s sister paper The Portland Mercury, contributed a few blurbs to this round-up. Smith, it should be noted, is not Stranger editor Rich Smith’s sister. Work fam, yes. Blood fam, no. 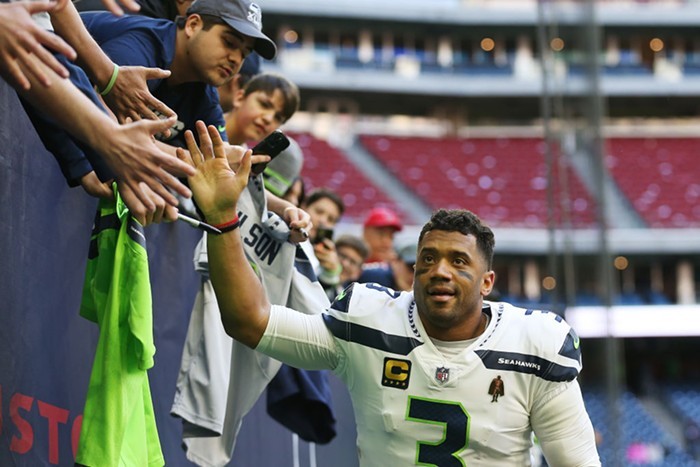 Russell’s Bellevue mansion is up for grabs. PHOTO BY TIM WARNER/GETTY IMAGES

It’s much worse in Portland.

We bid goodnight to an unparalleled scratchy voice and charmingly cranky comedic spirit. Gilbert Gottfried—who probably never imagined his Disney’s Aladdin parrot character would resonate through so many childhoods as his best-known work—has died at age 67, due to complications from muscular dystrophy.

Updates on the New York City mass shooting: NYPD identified a man named Frank R. James as the person of interest in the mass shooting Mudede mentioned this morning. Police haven’t arrested him as of this posting, though there’s a $50,000 reward for info that could lead to his arrest. Here’s how the Times breaks down what happened:

Shortly before 8:30 a.m., the police said, a heavyset, dark-skinned man in a construction vest and construction helmet donned a gas mask as a crowded N train approached the 36th Street station in the Sunset Park neighborhood, tossed two smoke grenades on the floor of the car, and began firing the gun. Thirty-three shots later, he fled.

Ten people were hit by gunfire, the police said. Five of the victims were critically injured, but none of their wounds were life-threatening, the Fire Department said. The 10 gunshot victims made the shooting the worst in the history of the New York City subway. Another 13 people suffered injuries related to smoke inhalation, falls or panic attacks, Chief Essig said.

@POTUS has been briefed on the latest developments regarding the New York City subway shooting. White House senior staff are in touch with Mayor Adams and Police Commissioner Sewell to offer any assistance as needed.
— Jen Psaki (@PressSec) April 12, 2022

The state’s Republicans are gloating:

I have a feeling New York would not benefit from more Republicans in power:

There it is, the idiot Republican idea that it would have been *better* if one of the other passengers was armed and started blindly shooting into the fog of a smoke grenade on a crowded subway. https://t.co/SjR8aKdrMd
— Elie Mystal (@ElieNYC) April 12, 2022

FYI: A two-bedroom apartment in Seattle costs $2,097 a month on average.

A one-bedroom apartment in Seattle costs $1,681 a month on average, according to a new national rent report from Apartment List.

Even a pandemic can’t keep rents down for long.

“For a cool $28 million,” you could own Russell Wilson and Ciara’s Bellevue home. Here’s the listing, which features palatial entryways, a grand staircase, five fireplaces, some thick-ass rugs, and a little telescope for peeping. This just reminds me that we need a Real Housewives of Seattle/Bellevue.

In an attempt to alleviate the pinch US residents are feeling at the gas pump, President Joe Biden announced that the Environmental Protection Agency will issue an emergency waiver permitting year-round sales of ethanol biofuel E15. Generally biofuel sales are outlawed during summer months because it negatively impacts air quality. But sure, keep driving your car.

We often tell you that we’re Seattle’s Only Blog, but the truth is there’s another blog ranting among these hills, and that’s Public Health Insider, the blog run by Public Health – Seattle & King County. They’ve got new “considerations and recommendations” for you to follow as we move into spring. The SparkNotes:

In today’s Savage Love Column: “Am I overreacting that not everyone at a 20+ person hotel takeover sex party plans to get tested after a gonorrhea outbreak?”

Drink in those images of Ukrainians shopping and moving freely in their city streets because Russian President Vladimir Putin said today, during a rare public appearance in eastern Russia, that the invasion was going as planned. He vowed to continue it and claimed peace talks had reached a dead end. Then he told Reuters that negotiations were difficult but continuing. He also called the reports of atrocities in Bucha “fake.”

SIFF Notes: The Seattle International Film Festival kicks off this Thursday, in case you’ve somehow missed it. It’s a celebrated return for the festival, which went dark in 2020 and fully virtual in 2021. Thankfully, it’ll keep up a hybrid schedule this year, with many of the films running online.

To get up to speed, take a look at our mega-list of SIFF stuff. (It’s growing daily! Eee! Run!) You could also check out this interview we did with local director Megan Griffiths, who has a film in this year’s fest and an optimistic view of the future of state’s filmmaking industry. In an interview today with the Seattle Times‘ Moira Macdonald, SIFF director Beth Barrett recommended the documentaries Navalny, Fire of Love, and Daughter of a Lost Bird (“as you can tell, I really love documentaries”). We also recommend those docs!! Navalny opens the festival this Thursday, and you should see and discuss the documentary, which has life or death stakes, as Navalny‘s director told us on the blog.

I was out sick yesterday (not COVID, fortunately; yet), and in my lounge-on-the-couch haziness, I stumbled on this loop of Miyazaki’s nature scenes. HBO Max put it together a few years ago to promote that they finally brought Studio Ghibli’s work to a streaming service. I highly recommend popping an edible and falling asleep to this:

If that doesn’t do it for you, maybe this will. A friend recently told me they play this video to fall asleep to every night.
Kinda fun, right?

me after taking a big fat monsta hit from a blont lol pic.twitter.com/3yrhIQUG1A
— the guy ever (@Iargesandwich) April 11, 2022