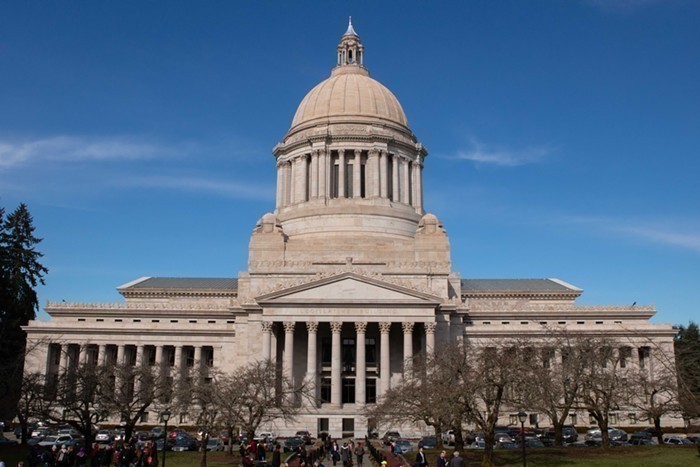 A womb and a tomb. Lester Black

Happy cutoff day!! Anything that wasn’t a budget or that wasn’t necessary to implement a budget needed to pass out of the House or Senate in Olympia today at 5 pm. I’ll write more about the blood left on the floor next week, but one death jumped out at me: A bill to legalize backyard cottages statewide is done. Hard to say why at the moment, but Sen. Lisa Wellman (D-Mercer Island) hung a bunch of amendments on it that would have watered down the proposal. Some Democrats want to be in a housing crisis forever.

Some bad cop bills made it through: One bill authorizes cops to use force to prevent someone from leaving a Terry stop, and another expands their ability to engage in a vehicular pursuit. You can read my little rant about both of them here.

Some I-don’t-know-how-I-feel-about-it bills made it though: Like the one to basically expand Seattle’s benefits for ridehail drivers statewide.

And some good bills will likely survive as well: Like a bill to let us tax ourselves for more transit, a bill to place restrictions on ghost guns, and another to restrict clips to 10 rounds.

Seattle Superintendent Dr. Brent Jones will remain the superintendent: West Seattle’s Leslie Harris was the only member of the school board to vote against him. The West Seattle Blog plans to ask why.

The war on drugs returns to Seattle: At a press conference this morning, Mayor Bruce Harrell announced a plan to put six cops on patrol and a mobile precinct on 3rd and Pine, KING 5 reports. At the press conference, the Mayor, prosecutors, and cops that were gathered said one thing but showed another. Most said they knew we couldn’t arrest and prosecute ourselves out of the problems that have plagued corners such as 3rd and Pine for years and years, but the only stats they mentioned were arrests and prosecutions, and their only concrete plans involved cops cracking down. Read Hannah’s piece on what the people who make a living on that block say about what they need.

Washington pension funds had $100 million tied up in Russia: The Seattle Times reports that the Washington State Investment Board pulled that money out of there. The total represented “less than 0.10% of its full portfolio.”

Speaking of Russia: Updates on Putin’s invasion of Ukraine include a UN emergency meeting to “condemn” attacks on nuclear power plants, a NATO meeting to “reject” a call from Ukraine to establish a no-fly zone (a wise decision on NATO’s part, imo), word that Russia banned Bloomberg news and the BBC from reporting on the war from Russia (the Russians don’t like reporters describing the war as a “war”), and increasing Russian pressure on southern Ukrainian cities. You can find more on all those updates over at the New York Times.

Russian independent TV news crew walks off set after “pressure” from government: The motherland didn’t like Dozhd’s coverage of the war, according to the BBC.

The U.S. talks a big game about blocking private jets and yachts owned by Russian billionaires, but “transparency advocates say enforcement efforts will be hampered by the opacity surrounding the ownership of jets,” the Washington Post reports. The rich can hide their connections to anything. Even megayachts.

Florida’s Legislature banned abortion after 15 weeks: Governor DeSantis cannot wait to sign the bill, as it will likely serve as a test case used to “unwind” previous abortion protections in the state, Politico reports.

Federal court says Biden can keep Trump’s “Remain in Mexico” immigration policy, but he can’t immediately boot asylum-seekers back to a country “where their ‘life or freedom would be threatened’ on account of their ‘race, religion, nationality, membership in a particular social group, or political opinion’ or ‘to a country where they will likely be tortured,'” reports Al Jazeera. Immigration advocates weighed in on the implications:

In the wake of this decision, the Biden admin should end the Title 42 travesty and uphold asylum law.

The US should be leading by example, upholding refugee law at our own borders as we encourage other countries to so at Ukraine’s borders & their own. https://t.co/jGRsizzvSr
— Eleanor Acer (@AcereEleanor) March 4, 2022

Oh, hey, by the way, the U.S. economy is doing great: Charles wrote a post all about it.

I leave you with this indie jam from my high school days: I’ve been told the vibe is shifting back to mid-oughts trash indie, which means my Saturn is returning, my Mercury is skipping Geology, my Mars is drunk on Keystone, and tonight we’re all driving to Lawrence to catch a show at The Bottleneck.