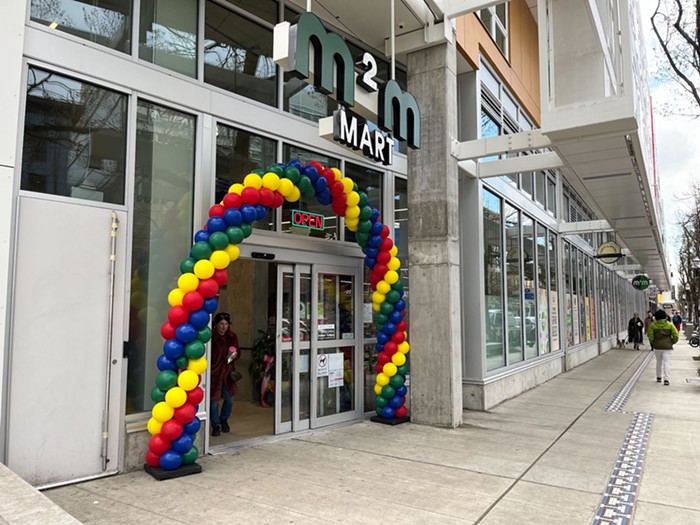 Gochujang, tteok, big-ass bottles of dark soy, BBQ, and whatever they got in the bakery: This is the kind of stuff I’m going to be filling my basket with after work this evening now that the M2M is open on Broadway. Matt already did a pass this morning, and he’s in love but overwhelmed. “Almost everything in there is unfamiliar to me—lots of fun new stuff to learn about,” he wrote in the company Slack. Help Matt out!! If you’ve got tips for the best stuff to pick up at this Korean grocery, then shoot him an email or tweet at him and let him know!

Biden is coming to Seattle: The president will be in town on Earth Day (next Friday), but we still don’t have details on exactly what he’ll be up to, other than talking up clean energy efforts, KOMO reports. High-five to anyone who flips him off for deciding today to open up more public lands for oil drilling.

Verizon store workers in Everett and Lynwood voted to form a union: The workers won the election 11-1 after a hard-won fight against union-busting bosses. In a statement, Verizon Wireless specialist Austin Hitch said, “We hope that our success shows our fellow Verizon Wireless workers across the country that their voice matters, and when you stand united you can do great things.” Good luck securing your first contract, Hitch and all!

There is a retail and food service union tsunami happening in the PNW and soon we’ll all be underwater.

Howard Schultz claims past management gave employees “false promises” but he’s going to make “promises that are real”: This is the latest in Schultz’s plan to show employees he’s listening and to undermine their efforts to unionize. “We are going to fix the near-term problems like maintenance people not showing up on time … and we’re going to fix the bigger issues of training, wages and the other issues facing the company,” he said in a video message set to be sent to employees, Bloomberg reports.

Man accused of killing Everett Police officer to be held without bail: Prosecutors in Snohomish County have charged 50-year-old Richard James Rotter with aggravated first-degree murder. Prosecutors and police say the officer approached Rotter in the parking lot of a Starbucks after seeing him moving guns from one car to another, KING 5 reports. The officer radioed to dispatch, learned Rotter had outstanding warrants, and attempted to arrest him. Rotter then “began to ‘fight’ with Rocha, and they fell to the ground. Five pops were heard on Rocha’s bodycam footage, and witness video shows Rotter shooting Rocha in the head, according to documents.”

Be careful out there: If you’re traveling across the state’s mountain passes this weekend, you may see light precipitation and snow. The passes are expected to dry out Sunday before rain returns that evening, the Seattle Times reports.

Another day, another sweep: This time in Ballard, displacing “about two dozen people,” according to KUOW’s Casey Martin. He’s been doing a good job covering the city’s effort to solve homelessness by tossing tents into the garbage.

In Ballard the City of Seattle is starting to clear the second homeless tent encampment in as many days. At least 12 people surviving in tents here will be forced to move despite there not being enough housing or shelter space available in Seattle. pic.twitter.com/1itLP9xXAa
— Casey Martin (@caseyworks) April 15, 2022

A big block sells in Denny Triangle: Life sciences developer BioMed Realty picked up a block at Denny and Dexter for $126.75 million. (You may know it as the site of Downtown Spirits.) The Puget Sound Business Journal reports that BioMed has applied for permits to demolish the buildings at the site and to do excavation work.

Twitter attempts to outmaneuver Musk: The company that runs the bad app plans to “flood the market with new shares” to avoid a hostile takeover from the guy who likes to use the platform to juice his own holdings, the Washington Post reports. The move would dramatically increase the price of Musk’s attack, “severely” reducing the chances that he’ll take over, bring Trump back, and let everyone start hurling racist slurs at each other, or whatever Free Speech absolutist nonsense he wants to do.

Ukraine updates: In a diplomatic note, Russia warned the US and other countries that sending more weapons to support Ukraine will produce “unpredictable consequences,” according to the BBC. So far, the US alone has spent “more than $3 billion in military assistance to Ukraine.” Meanwhile, Russia has flattened Mariupol after a siege lasting “more than a month.” According to the Washington Post, “analysts are predicting it will probably become the first major Ukrainian city to fall in the coming week.” That fall will create a “land-bridge” between Russia and Crimea, and also give the country access to the Sea of Azov. In other news, Kyiv’s police chief reported finding 900 dead civilian bodies in the capital, Al Jazeera reports. “We understand that under the [Russian] occupation, people were simply executed in the streets,” the chief said.

We have to keep saying this: The pandemic is still happening, and it’s still bad, and this B.A2 stealth surge is getting worse, and you should get your booster if you haven’t gotten it yet and you’re eligible. In the meantime, we need to be installing better ventilation systems, because this shit is going to be around a while. And while nobody in Washington is making noises about reimposing mask mandates, wearing high-quality masks indoors will help stop the spread of new cases and protect the vulnerable.

CoV-19 cases in Seattle-King County have been slowly increasing for about 3 weeks while hospitalizations & deaths remain at near pandemic-long lows, thanks to vaccination + boosters. Highest rates in young adults.

The pandemic will continue being bad until we adequately fund the global effort to get vaccines into arms, but that’s not looking likely. According to Politico, “dozens” of workers at the United States Agency for International Development, which is tasked with increasing global immunity from COVID, “are looking to leave the agency after Congress failed to provide additional funding for their programs.”

Gut yontif to my fellow jews out there: I finally tested negative for COVID today, so I’ll see you and all the cousins for Pesach.

I leave you with Ecco2K’s mesmerizing “Don’t Ask.” Catchy, airy, chock-full of toxic yearning, and yet also somehow supremely chill.