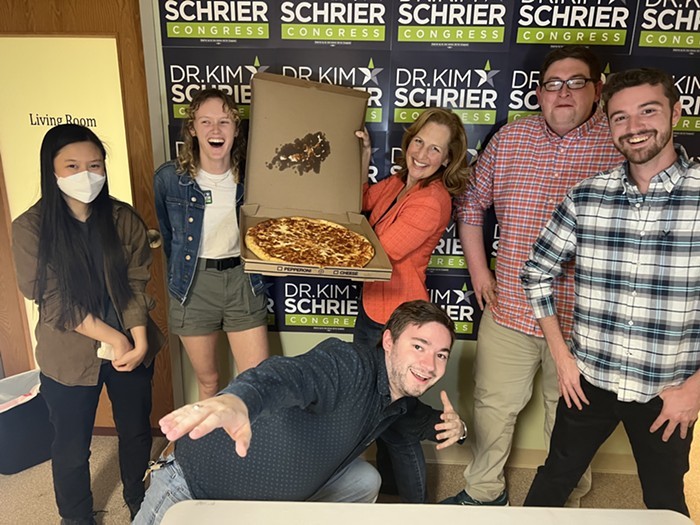 Phew, last night’s midterm primaries were pretty fun!! Unless you were a Republican, in which case you probably spent a good deal of the evening looking at yourself in the mirror and wondering why things weren’t going your way despite all your wealth and natural charisma. But don’t worry, you horrible little freak. Remember, you still maintain structural advantages in every realm of federal politics.

Standard-issue Washington Democrats, on the other hand, were popping bottles—or, more accurately, pizza boxes. Though we’re still waiting on around half the vote to come in, things are looking good for Democrats across the state. But that’s not all! Let’s talk about it.

Incumbent Congresswoman Kim Schrier just missed taking a majority of the primary night vote with 49.4%. That showing marks an improvement of where she clocked in for the 2020 primary in a presidential year (43.3%), suggesting that the Democrats achieved their goal of drawing her a more favorable district when they added parts of northeastern King County and Snohomish County to the 8th CD in redistricting last year.

Alternatively, Schrier’s stronger showing could mean that this particular bunch of extremist Republican anti-abortion yahoos are simply less appealing to voters primarily concerned with protecting abortion rights, which the recent WA Poll found to be the top issue for 28% of voters statewide. In any event, abortion rights taking center stage in the Congressional race can only mean good things for the House’s only Democratic woman doctor, and her supporters are taking notice of that fact.

State Democratic Party Chair Tina Podlodowski expressed confidence that Schrier would pull through regardless of which Republican makes it through to the general election, saying plainly that “Kim Schrier will win that district.” All signs so far point to Podlodowski’s prediction coming true, especially considering the significant investment Schrier’s colleagues in the House made to get her there in the first place: Schrier’s first win in 2018 took nearly $8 million in outside spending from Democratic-aligned PACs supporting her and opposing consummate loser Dino Rossi.

The Mom-off for U.S. Senate Is Less Intense than a PTA Meeting

Senator Patty Murray’s campaign acted real scared of “new mom in town” Tiffany Smiley. As Seattle Times’s Jim Brunner suggested on Twitter, she probably put on the act to get the pearl-clutching liberals to send her last-minute donations.

But from the results of last night’s initial ballot drop, the 30-year incumbent will easily sit on the Senate for another six years. Murray got 54% of the vote, while Smiley got about 32%. If you add votes from the other Republicans to Smiley’s total (assuming those voters switch to her in the general), she’d wind up with about 40% of the vote.

So not only will we have a major abortion-rights champion to dunk on Mitch McConnell and his loser goons, but Murray’s wiggle room may enable her to take some other Democrats to Congress with her. Her lead could be just about the best thing that could happen for the quest to keep Congress blue, because now she can funnel the money she scared out of rich Washington voters into swing districts around the country. According to Murray’s campaign, their “top swing-district priority” will be supporting Rep. Kim Schrier’s re-elect campaign in the 8th Congressional District.

Despite their efforts to give Congress a long overdue facelift, socialist and progressive challengers in some of western Washington’s Congressional Districts (the 2nd, the 6th, and the 9th) did not manage to make it through the primaries last night.

It’s a disappointing result for the socialists, who appeared to be in a better position this cycle. Teacher and progressive activist Jason Call, who ran in northwest Washington’s 2nd CD, raised more money than he did in his 2020 run. The same goes for small-business owner Rebecca Parson, who was running in the 6th CD, which covers Tacoma and the peninsula. Meanwhile, teacher and union leader Stephanie Gallardo, who came into last night “hella hopeful,” earned 13% of the vote in King County’s 9th CD despite having raised more money than Sarah Smith, the progressive who challenged Rep. Adam Smith during the 2018 blue wave. In fact, Gallardo only pulled in half of the vote share that Sarah Smith did in the 2018 primary. Even Rep. Smith would be surprised by the poor showing for the socialists. Last week, he told The Stranger that he thought a socialist had a much better chance of winning his district than a Republican.

“Clearly the majority of Democratic primary voters feel that maintaining the status quo is where they are comfortable, and a truly progressive vision for the future is not something they’re willing to take a chance on at this point,” said Jason Call. But his campaign isn’t throwing a pity party just yet. He said they remain optimistic that progressive votes will trickle in and elevate his campaign to second place.

That would be quite the comeback. He would need to make up for a 5,000-vote deficit to catch the Republican in front of him. Even though the results may communicate that primary voters feel comfortable with the status quo, Call said his campaign won’t change their message if they get the second spot. “We will continue to fight relentlessly for the needs of those that the corporate-dominated status quo is failing, including the right to health care, housing, and a livable planet for the future,” he said.

Trump Candidates Couldn’t Get Their Shit Together

The former President tested his strength in the Evergreen state against two Republican members of Congress who voted to impeach him: Rep. Jaime Herrera Beutler in southwest Washington’s 3rd Congressional District, and Rep. Dan Newhouse in the eastern 4th Congressional District. Both incumbents will very likely make it through to the general election, boxing out their Trump challengers in a 2-0 victory. How did they do it? Well, they didn’t. The MAGA dorks did it to themselves.

Down in the 3rd, it looks like Beutler benefited from establishment GOP PAC money that pitted Trump-loving candidates Joe Kent and Heidi St. John against one another. As The Seattle Times reported, a group called Conservatives for a Stronger America dropped over $1 million on ads attacking Kent and supporting St. John. Initial election results last night gave Kent 20% of the vote and St. John 15% of the vote, allowing Beutler to fly past them with 24.5% of the vote. The incumbent will likely face off against Democratic candidate Marie Gluesenkamp Perez, who picked up 32% of the vote, and who will likely lose in the general, which is too bad. Had either Kent or St. John joined forces, though, we could be looking a contest between a MAGA Republican and a Dem in southwest Washington, which would have been … honestly a little frightening.

Proving there’s a kernel of truth to every cliche, the broken clock that is the Seattle Times Editorial Board happened to choose the right candidate in several of Seattle’s open seats for the State Legislature. They agreed with the SECB’s legally-binding endorsements of Chipalo Street in the South End’s 37th Legislative District, Julia Reed in Ballard’s 36th LD, and Emily Alvarado in West Seattle’s 34th LD.

Each of those candidates pulled out to a significant lead on primary night, with even relatively unknown Chipalo Street distinguishing himself with a strong performance against long-time community advocate Emijah Smith in a field with several other first-time candidates.

But the real evidence of the importance of media endorsements became apparent in the 46th Legislative District, covering northeast Seattle. Despite coming in a distant fourth in fundraising, Darya Farivar rode the strength of the SECB’s full-throated endorsement to a 1,647-vote lead on primary night over third-place finisher Melissa Taylor.

The Seattle Times Editorial Board threw its support behind moderate Lelach Rave in that race, whose campaign has already spent tens of thousands more than Farivar has raised. For all that spending, though, Rave only holds a 682-vote lead over Farivar with more ballots still to count.

HAAAAAAAAAA. Ha ha HA. At the beginning of election season, Democrats expected to lose seats in the State House and in the state Senate. The only question was the severity of the loss: modest shrinkage, or red wave Armageddon? Last night’s initial results suggest neither. If Democrats don’t get complacent, they could hold their large majorities in both chambers, and maybe even pick up a seat. Let’s take a brief sprint around the state:

None of these leads came for free. WA Wins, a PAC that supports Republicans in the state Senate, spent a million dollars against Dem incumbents. They may as well have lit it on fire. All of the Democrats they attacked with ads are leading their races by significant margins.

Now, all eyes will be on the 42nd Legislative District, which covers Whatcom County. None of the Democratic candidates running in those races pulled in more than 50% of the vote, but money and lots of door-knocking in that area may repay efforts in the form of larger state House and senate majorities.

Washington State Democratic Party Chair Tina Podlodowski promises to do just that. “We can’t get complacent. This year, we’re going to keep doing all the things Democrats couldn’t do much of in 2020 [due to the pandemic]: knocking doors and making calls,” she said.