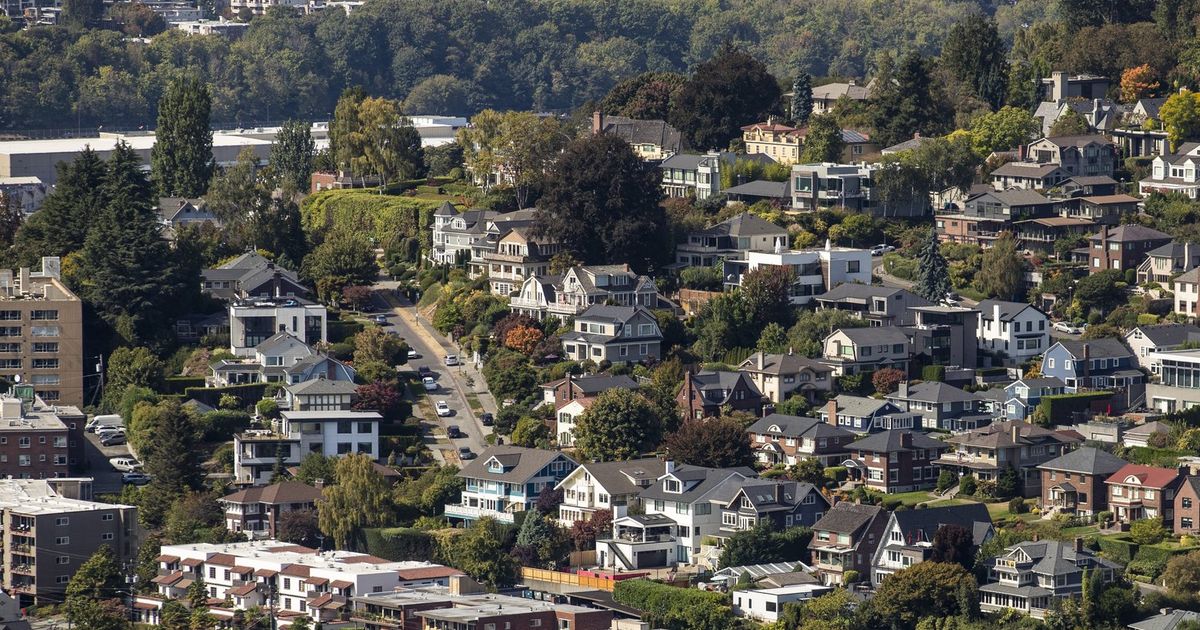 A cache of new homes hit the market for sale in the Seattle area last month, hinting at the arrival of the spring market when home shopping will heat up.

If the last two years are any indication, home shoppers may be bracing for long lines at open houses, aggressive bidding wars and skyrocketing prices. But some expect 2022 to be at least a little cooler in the local housing market.

Could the eye-popping growth in prices finally level off? Here’s a look at what to expect this year.

Are homes finally going to be affordable?

The median home price in King County last month, not including condos, was $857,750, up 10.7% compared to January and 14.4% from a year earlier, according to data released Monday by the Northwest Multiple Listing Service.

But rising mortgage rates, high prices and some new housing construction could combine to temper rising prices across the country, predicts Mark Fleming, chief economist for First American Financial Corporation. “What goes up, must eventually moderate,” he wrote last month.

“I do expect that we will see a slower rate of growth in terms of pricing,” said Jamie Jensen, a John L. Scott broker based in Kingston.

“Some buyers are just getting frustrated and getting out of the market for now,” Jensen said. “And when you go from last year, getting 15 offers on a property, to this year, getting maybe four to five, that’s going to help temper those sold prices.”

When John Stevens listed his five-bedroom Tudor near Lake City last month, he braced for something like the stories he’d read about the frenzied local housing market: long lines for an open house and lots of offers.

“I knew I wanted to take advantage of this pop in the market that wasn’t going to last,” he said.

Instead, when the time came to review offers, the home had received no offers. Soon, a buyer offered right at the list price, and Stevens took the offer.

“I was anticipating there was going to be a bidding war and when didn’t happen, it was a real letdown,” he said. “The person who bought it was very smart. They knew they could possibly be the only offer and I’d likely accept.”

Even with slower bidding wars, affordability will be a challenge.

Housing costs will likely continue to rise faster than household incomes, Fleming noted. Nationally, the average mortgage payment has climbed along with home prices and now takes up nearly 26% of median household income, translating to “the worst affordability since 2008,” according to data provider Black Knight.

Since the start of the pandemic, low interest rates have drawn more homebuyers and in turn driven up competition and prices. That could begin to slow this year.

The Mortgage Bankers Association projects interest rates could hit 4% by the end of this year, up from 3.1% at the same time in 2021.

In the Seattle area, “the competition’s going to be higher on the lower end, because when interest rates rise, buyers can’t afford as much, so they’re forced to look at the lower price point,” said North Seattle Redfin agent Jasen Oda. “The first-time homebuyer range — median-priced homes and below — are going to really be hurting the most in this rising interest rate environment.”

The rapid drive-up in home prices has sparked fears of another housing bubble, though many economists predict the market won’t crash like it did in 2008, in part because of stricter underwriting rules.

More to choose from

The spring arrival of new homes for sale is already offering buyers more to choose from amid an ongoing national housing shortage. That uptick usually begins in January and February and lasts through June.

In February, the number of new listings in King County was up 45.5% from January. In Pierce County, new listings were up 39.3%, and in Snohomish County, they were up 36.3%.

In Kitsap County, where new listings are up 21.7%, new construction is helping provide more options for homebuyers who can spend $500,000 or more, Jensen said, and some homeowners who held off on selling are ready to make a move.

“I’m getting calls from sellers who are like, ‘OK I’m finally ready.’ I think people are starting to feel like we can get past COVID and now they’re feeling more comfortable with having people in their homes,” Jensen said.

Still, demand from homebuyers far outpaces the supply. In February, it would have taken about two weeks to sell through all the available homes for sale in King County, according to a measure known as months of inventory. The listing service considers a “balanced” market to have four to six months of inventory.

“So many buyers came off the holidays, fighting for the trickle of homes that are coming onto the market,” Oda said.

Even with more inventory, Jensen said, “it’s still going to be a seller’s market for the foreseeable future.”