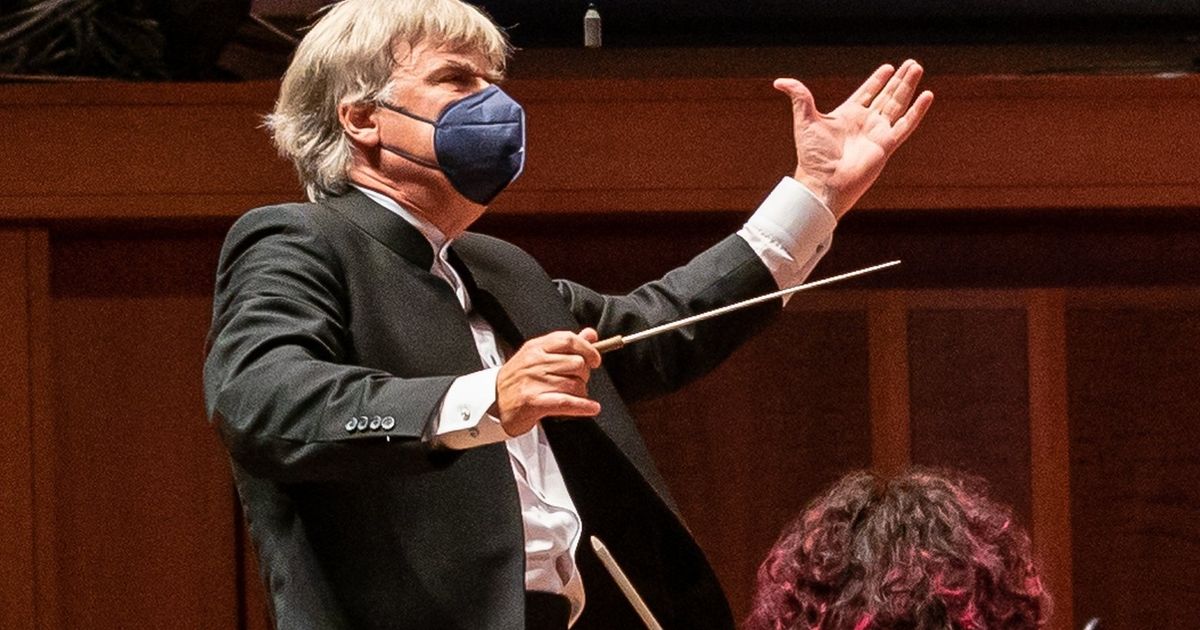 Seattle Symphony Music Director Thomas Dausgaard has abruptly stepped down from his post, midway through his third season at the top of Seattle’s flagship orchestra.

Dausgaard’s last day with the Symphony was earlier this week; he conveyed his decision via phone call from his home in Denmark to Seattle Symphony board chair Jon Rosen, according to the Symphony. The Danish conductor had only been back in person with the Symphony for a concert less than two months ago, after pandemic-related travel restrictions had kept him away for some 20 months.

“My decision to step away at this moment when we’ve realized such collective artistic success is a result of these pandemic times, which centers the question for us all: How do we value our lives?” Dausgaard said in a Symphony news release. He could not immediately be reached for comment. “I have enjoyed immensely my life with the Seattle Symphony, and it is time for me to move on.”

Dausgaard is leaving ahead of his originally planned final season in 2022-23, and with concerts he’s been scheduled to conduct coming up. Seattle Symphony says it’s arranging for guest conductors to step in and that programming updates for the current season will be announced shortly.

“The pandemic has been a time of great challenge and self-reflection for us all, and so we understand and respect his decision,” Seattle Symphony President and CEO Krishna Thiagarajan said in the news release.

“I don’t know that I expected it, but I’m not sure I was totally surprised,” Thiagarajan said Friday morning of Dausgaard’s decision, adding that coronavirus restrictions have presented Dausgaard with “significant problems in travel” and that the conductor’s “difficulty in making music regularly” prompted his departure.

There are no plans at this time to appoint an interim music director. Thiagarajan was optimistic about a continued SSO relationship with Dausgaard in some form and the possibility that he’ll be invited to return to guest conduct.

The Symphony will appoint a search committee — including representatives of musicians, board and staff — to find its next music director, said spokesperson Dinah Lu.

Dausgaard, who is also chief conductor of the BBC Scottish Symphony Orchestra (he’s in his final season there), began his tenure as Seattle Symphony’s music director in 2019, after several years of guest conducting here. He first appeared with the SSO as guest conductor in 2013, and was appointed principal guest conductor starting with the 2014-15 season.

But he faced upheaval caused by COVID-19, with concert cancellations announced through January 2021 and streaming concerts performed without a live audience for the remainder of last season. Dausgaard was unable to physically be with the Symphony, as visa issues related to pandemic travel restrictions kept him out of the country. Live audiences returned this past September, with masking and proof-of-vaccination requirements and distanced seating in Benaroya Hall, the orchestra’s home. Dausgaard finally was able to rejoin the Symphony in person for a Nov. 11 concert.

His directorship began promisingly, with Dausgaard continuing the orchestra’s acclaimed series of recordings on its in-house label, Seattle Symphony Media. The Symphony is up for a Grammy Award this year in the best orchestral performance category, for a live recording of music by Scriabin and Strauss taken from concerts in the opening months of Dausgaard’s inaugural season. The orchestra was also a nominee for a 2019 Grammy in the same category for its Dausgaard-conducted “Nielsen: Symphony No. 3 and Symphony No. 4.”

Dausgaard’s programming plans continued, and even expanded on, the interest in contemporary music and new commissioned works initiated by previous Seattle Symphony Music Director Ludovic Morlot and his predecessor, Gerard Schwarz, with increased attention paid to music by women composers and composers of color.

“Thomas Dausgaard is a true visionary who has had a lasting impact on the Seattle Symphony community,” Rosen, the Symphony’s board chair, said in the news release. “His more than a decade conducting and leading our orchestra has been marked by artistic success and a genuine, enthusiastic connection with musicians and audiences alike.”

Gavin Borchert is a freelance arts writer and composer. Email: [email protected] This report is supported, in part, by the Rubin Institute for Music Criticism, San Francisco Conservatory of Music, and the Ann and Gordon Getty Foundation.