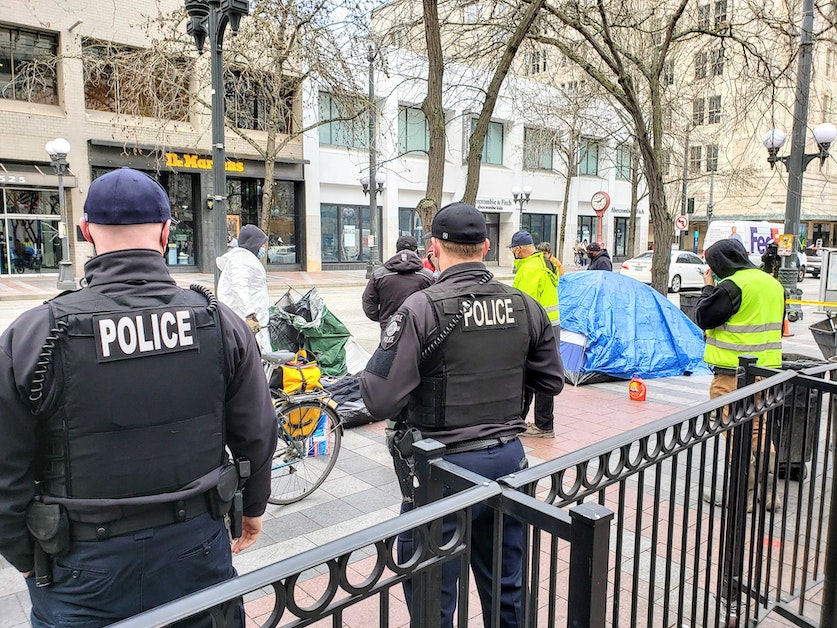 Over a dozen people living in tents near Westlake Park in downtown Seattle were told to leave on Friday by crews with the city. The clearing came two days after an encampment was removed across the street from City Hall on 4th Avenue.

Cody Hill had been in a tent near Westlake Park for about three months. Before that he survived unhoused in Everett and moved to Seattle to find housing and health services.

“I lived homeless in Snohomish County for two years prior to this,” Hill said Friday morning as he packed his belongings. “I came down to Seattle because I heard this is where you can get help.”

Hill was one of 12 people, the city’s Human Services Department says, who were referred to some sort of shelter on Friday morning. One person said he was excited to get into a tiny house village. Two people were sent to enhanced shelters at a hotel.

At least two people were not set up with any shelter and instead left the park with their tents and belongings. A man named Jose packed his bags onto a skateboard and said he’d move “someplace where cops won’t bother me.”

Seattle Police and a dump truck were the first to show up at Westlake on Friday, followed by outreach workers and Parks Department crews.

A few mutual aid volunteers helped people take down their tents and brought coffee from the nearby Starbucks.

Westlake Park was the second camp to be cleared by the city last week. On Wednesday, a group of people who had been surviving in tents for months across the street from City Hall were cleared out. Some were connected to shelter, but others moved down the street.

Cody Hill said he hopes he can transition from temporary shelters to long term housing. The Navigation Center will be his second shelter experience in the six months he’s been here in Seattle. Going back to Everett, he said, is not an option.

“There’s not a lot of help outside of King County,” Hill said. “Our state really struggles with homelessness outside of this area.”