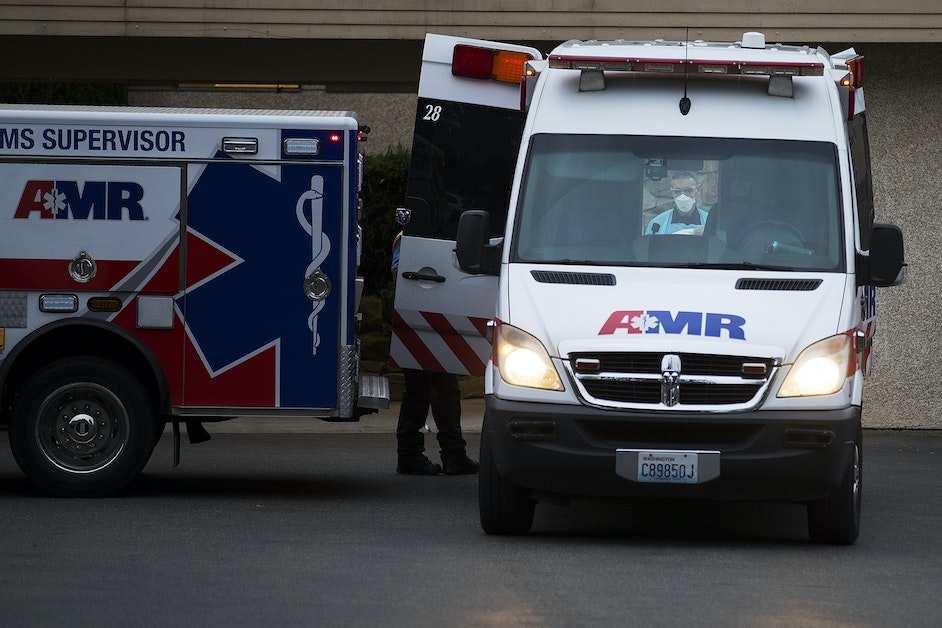 The private ambulance contractor for the Seattle Fire Department, AMR – or American Medical Response – paid nearly $1.4 million last year for violating the terms of its contract with Seattle and arriving late to calls.

AMR contracts with Seattle to provide basic life support ambulance services and transport low-acuity patients. (Someone who fell and got hurt, for example, not someone having a heart attack.)

Under the contract with the city, AMR’s ambulances have target response times they must meet at least 90% of the time citywide to avoid paying fines.

For example, the first AMR ambulance is due on the scene in under 11.5 minutes. Last year, AMR ambulances arrived late around 20% of the time on average citywide, according to records KUOW obtained from the Seattle Fire Department. Many ambulances were a few minutes late. A few took an hour or more to show up.

In a statement, a spokesperson for AMR said the longer response times are due to staffing shortages and long wait times at ERs.

“During these waits for a hospital bed, which can range from 40 minutes to four hours, ambulance crews continue providing high-quality patient care either in the ambulance or in the receiving areas of the emergency department,” the statement said. “However, ambulances held at local emergency rooms with patients cannot respond to other 911 calls.”

Former EMT Mackenzie Fall, who worked for AMR for several years, said the company often didn’t have enough ambulances deployed around town, so the others were stretched thin.

“A lot of times, the time I’m getting on shift is rush hour, and we’re getting a priority call out of the gate,” she said.

She would report for duty at the AMR office in Tukwila.

“There’s absolutely no way we can get to, you know, like Ballard or something, which would happen a lot for some reason,” Fall explained. “It’s like, ‘Why is it always the northwest area?’”

A few years ago, the pace of the job was much slower, and morale was higher, Fall said.

“There would be nights when we would all be posted in the same area. So, a lot of us would hang out in the parking lot for like 20 minutes until someone got a call,” she said. “It didn’t feel as super intense, balls-to-the-wall, 24/7 like it was when I quit.”

Seattle Fire Chief Harold Scoggins was not available for an interview.

In a statement, department spokesperson Kristin Tinsley said, “Chief Scoggins recognizes that there is a larger challenge with the entire healthcare system for transporting and getting patients to emergency rooms. His hope is that AMR can meet their contractual obligations so SFD units can remain available for the next response.”

She said AMR’s failure to meet its obligations “keeps our units on scene for longer and presents a challenge for SFD to provide the best customer service to the patients we treat.”

The company’s performance didn’t improve much during the first part of 2022. AMR racked up nearly $500,000 in fines as of May 1. The money goes into the city of Seattle’s general fund.