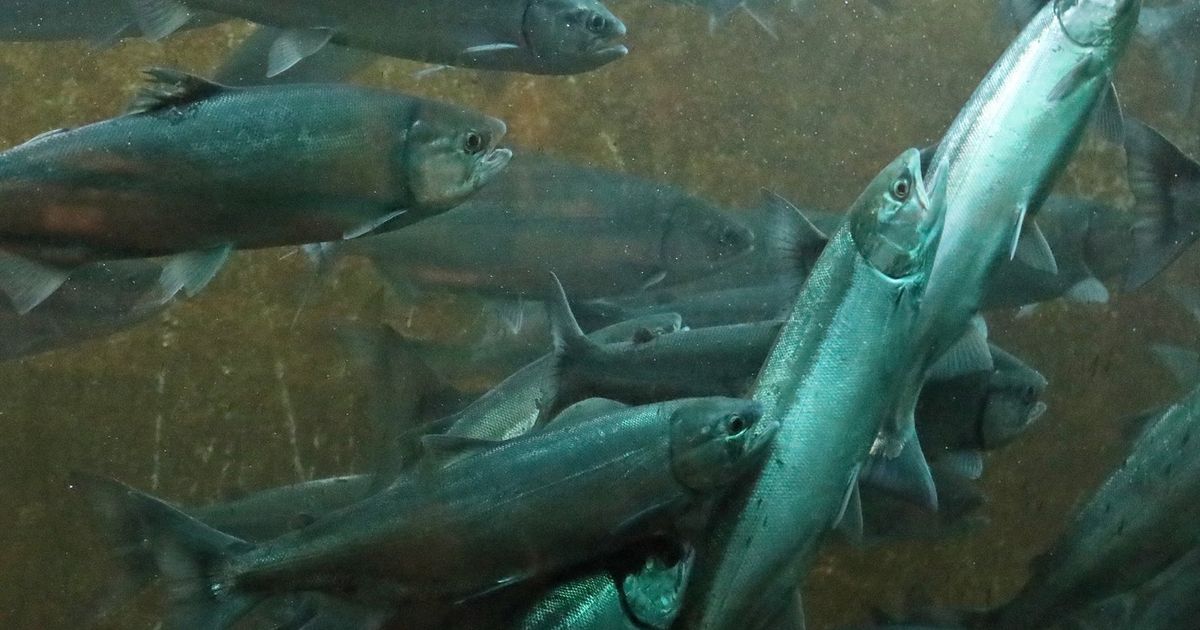 Maybe the best catchall phrase I’ve seen for what defines the Pacific Northwest is: “Wherever the salmon can get to.”

Seattle writer Tim Egan came up with that. It captures the geography, the culture and the ecological uniqueness of our strange, still-a-little-wild corner of the continent. All in the reproductive odysseys of a fish.

I’m pretty sure he meant anywhere a salmon can swim to. What if they’re now making the trip by truck?

That’s what we’ve come to in Seattle, with the collapse of our signature sockeye run. An annual summer spectacle that once saw hundreds of thousands of silvery blue and green salmon surging into the teeth of the city, this year’s run is down to a desperate trickle.

With only about 3,500 passing up the fish ladder at the Ballard Locks through June 30, it’s on track to be the smallest Lake Washington sockeye return in 50 years (which is when they started counting).

So few fish are returning that local biologists have concluded they’re going extinct without emergency help. So they’ve launched a makeshift rescue plan: To drive the fish, by truck, around their last 30 miles of habitat, from the Locks all the way to the Cedar River headwaters area.

“This is a full-on life support effort,” says Aaron Bosworth, district fish biologist for the state. “It’s necessary, but it’s definitely a sad day in the story of this salmon run.”

About a dozen state and tribal workers have been stationed at the Locks fish ladder every day this past week, watching and waiting for the sockeye to return.

When some come in from the ocean, usually on the high tides, a couple of workers light M-80-style firecrackers called “seal bombs” and throw them into the water. The blasts shoo the ravenous harbor seals off for a moment, and thrill — or appall — the tourists.

As the fish splash up the ladder, heading toward Lake Union, workers from the Muckleshoot Indian Tribe catch them with hand nets. The fish are put in a tank on a boat and then driven a quarter-mile up the ship canal, where they are loaded into a larger tank on a repurposed Seattle Public Utilities flatbed truck.

Rather than letting the fish try to swim through Lake Washington and up the Cedar River to spawn, the truck bypasses all that and deposits them at Landsberg, 40 miles distant, east of Maple Valley. There the fish are scheduled to wait it out in fiberglass pools fed with cold spring water until October, when their eggs and sperm will be harvested at a hatchery.

The crew plans to truck about 900 salmon, nearly 10% of the expected run. That number of adult fish can produce more than a million fry. The hope is that’s enough to not only prop up the run, but grow it.

This complicated, labor-intensive operation is all to get around Lake Washington. Sockeye are unique in that they only exist in river systems with a lake. But our particular lake is now a death trap.

In recent years, more than half of the adult fish passing through the Locks haven’t made it out of the lake into the Cedar River. In 2020, nearly 9 out of 10 died.

The big hazards, biologists say, are warmer water temperatures, diseases and stress from ongoing urbanization. There hasn’t been a fishing season for sockeye since 2006 (when 417,000 returned).

Ours used to be the largest sockeye run in the Lower 48 states, and one of the larger fish runs smack through an urban center in the world. When it’s on, it’s Seattle’s greatest tourist attraction — the main thing that still makes us different from anywhere else. As I wrote in 2006, “so much wildness surging through the city has the feel of a miracle to it.”

Maybe it was a miracle.

“Are we going to have to truck the fish from now on, forever?” wonders Frank Urabeck, a longtime sport-fishing advocate who works with an interagency group, the Cedar River Council, to try to save the run. “We can’t. This is crisis mode. They’re just doing what they gotta do to keep this run alive, to buy some time.”

Salmon have been artificially transported around man-made obstacles like dams for decades. But trucking them around miles of their own key habitat is another level of existential. As one biologist working on the project noted, if you have to bypass the entire sockeye lake to save the sockeye, you start to wonder whether Seattle is meant to have such a salmon run anymore.

It’s a noble effort. And yet at the same time, an absurdist situation. We’ve driven salmon to the brink. Now we’re literally driving them to try to save them.

I guess all I can add, though it sounds like disaster tourism, is: Go see the sockeye. Despite the small size of the run, tourists were still gasping at the sight when I was out at the Locks viewing windows this past week. This year’s run is expected to peak through the Locks this coming week, around Thursday.

Go see them before it’s too late. Or before our great annual salmon migration is down to trucks going by on the highway.