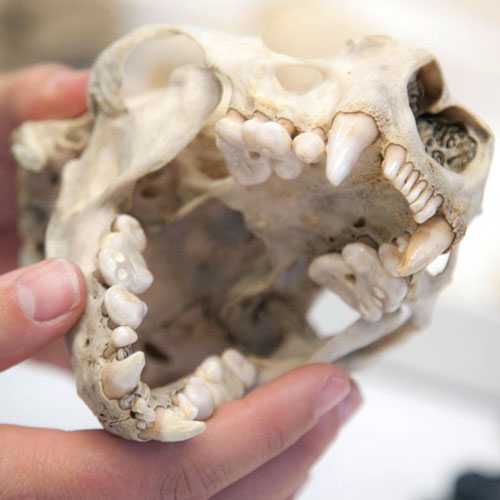 With these results in mind, we decided to look even deeper at potential differences within populations; that is, between male and female sea otters.

Male sea otters are larger than female sea otters; males on average weigh 90lbs while females weigh 40-60lbs. Therefore, we expected to also see this trend in skull size—and we did!

However male sea otters not only have larger skulls than females, but also have skull features that would allow them to have more forceful bites for their size, including larger crests and ridges that provide greater surface area for muscle attachment (more muscle equals stronger bites!). In addition, male sea otters have stronger, more robust lower jaws that allow them to crush the toughest of prey.

Our results suggest that male sea otters have the potential to consume harder, tougher prey than females just by virtue of their skull size and shape.

But do these differences between males and females give males the upper hand when feeding? Not necessarily. What females lack in size, they make up for with brains!

Female sea otters are more prone than males to use tools, like rocks and stones, to crack open tougher-than-usual prey, like clams. Some males also do this behavior, but their mothers likely taught them how to do it.

It is possible that males are larger and generate more powerful bites due to sexual selection, and not to have an advantage over females during feeding. Males fight vigorously with each other for territory and reproductive opportunities with females, and the biggest and strongest sea otter generally wins.