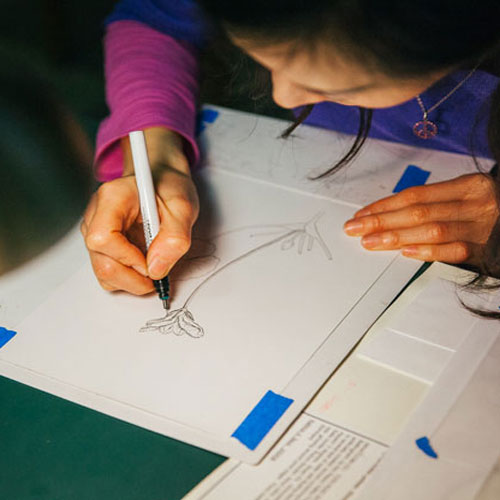 For the past five years, the Burke Museum Herbarium (also known as the WTU Herbarium) team led by Curator Richard Olmstead, Collections Manager David Giblin, and Research Botanist Ben Legler, have been working to update of the manual.

“If we didn’t revise it, we really wouldn’t have a comprehensive guide for our region,” said David. “At the time the original users took this book to the field, they could identify a plant with the correct name 95% of the time…today taking the same book, you arrive at the correct name less than 50% of the time.”

The newest edition will include 5,300 taxa (“taxa” is the collective term for species, subspecies and varieties), with illustrations accompanying nearly all of the new additions.

The 1,100 new taxa consist mostly of new species discovered over the last 44 years, native species that were not previously documented from our region, and weeds that are well known to science but only arrived in the Pacific Northwest recently. Many of these were collected during the Herbarium’s annual forays in the Pacific Northwest.

“It is the confluence of the database, active collecting, and experts who know the plants,” said Richard. “And through the course of the Flora project, we’ve brought a lot of those things together.”

Crystal Shin, a scientific illustrator and the primary illustrator for the revision, works to match the style of the original illustrations so they seamlessly fit. “Before inking, I study the style and techniques that [Jeanne] used on a similar species,” said Crystal. “I like her work very much and my ink drawing style is pretty close to hers.”

It takes approximately two hours to complete each illustration before it is placed on the page in the book.

“It’s been a great opportunity to bring in people from the University of Washington community who aren’t professional botanists, but they have skills that can contribute to the project,” said David.

In addition to professionals, students and enthusiasts interested in the native flora, this updated version is crucial to helping federal, state, and tribal resource managers accurately identify invasive weeds, which can threaten native habitats. Publication of the new Flora is planned for early 2018.

“This book enables us to be better stewards, we know what’s here, whether it’s common or rare, or invasive,” said David. “It enhances our ability to preserve plant diversity in our region for future generations.”