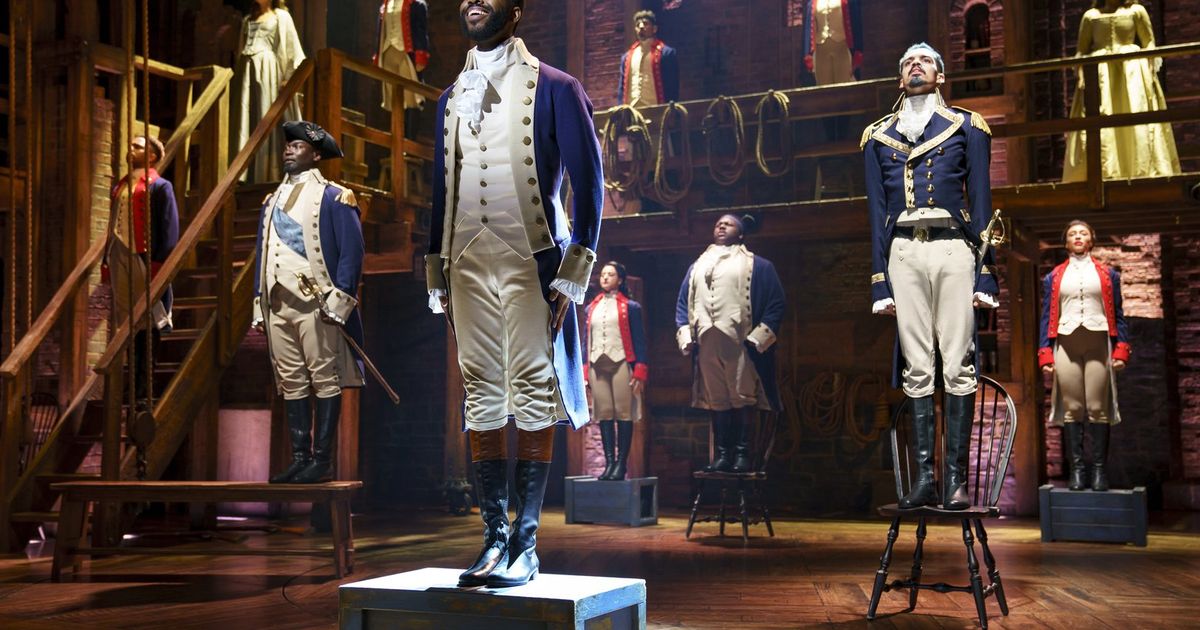 When “Hamilton: An American Musical” opened off-Broadway in 2015, it felt exceedingly progressive. The new musical from Lin-Manuel Miranda, one of the brilliant minds behind Tony Award-winning hit “In the Heights,” centered a refreshing swath of actors of color. Through “Hamilton” (the tour stop at Seattle’s Paramount Theatre runs through Sept. 11), Miranda told the tale of Alexander Hamilton’s life during the formative years of the United States through hip-hop and rap to create a musical featuring almost three hours of songs with very little spoken dialogue interspersed.

But even as the musical grew to an almost unprecedented level of pop culture success, there have been grumblings around whether this musical deserves the level of adoration it has received. As laid out in exceptional detail by Aja Romano in a 2020 Vox article, over the years, folks have pointed out that, for instance, this so-called progressive musical has zero named characters of color, except for Sally Hemings, who was so cast aside in the narrative that the creators decided to adjust the choreography for Hemings prior to the show reopening on Broadway in 2021 to pay her more respect. Plus, the featured characters in “Hamilton” were all real-life slave owners, and we watch and clap as they craft a country that, at the time, didn’t think people of color or women (you know, the folks who carry the Broadway hit on stage) were deserving of full rights.

For years, a debate has quietly raged on under the din of popularity that the show garnered, questioning whether the problematic aspects of the show are a crucial part of the show’s commentary on this country’s history or if “Hamilton” instead serves as a revisionist look at a group of white men we call the Founding Fathers.

That’s a lot to put on a musical that I sat giddily listening to in a Chicago airport in 2015, the day NPR released a preview for the highly-anticipated original Broadway cast recording. The country has come such a long way and been through so much since that day, and as I sat in the opening night audience for the Seattle return of “Hamilton,” I had to worry: Now, after reading all the detractions, would I suddenly dislike a show that I’d previously enjoyed more than any new musical since the turn of the century?

I’m relieved to report that my enjoyment has not waned. “Hamilton” remains an absolute masterpiece, despite the completely reasonable objections to the Pulitzer-winning work. Even sitting in a “Hamilton” audience, which practically vibrates with anticipation before the show even starts, is a rare theatrical experience.

But what I’ve come to love over the years is the way it allows so many actors of color the chance to be showcased in a way that other musicals rarely (if ever) do. Each and every actor brings their own unique interpretation to the stage, enlightening new nuances within the work of Miranda, director Thomas Kail and choreographer Andy Blankenbuehler.

(Brief disclaimer: The reviewed performance was on Aug. 4. The cast will have a few changes during its Seattle run, including bringing in DeAundre’ Woods as Hamilton and Morgan Anita Wood as Eliza Schuyler beginning Aug. 9.)

What first caught my eye was the wide-eyed enthusiasm and passion from Julius Thomas III, whose earnest portrayal of the titular character brought tears to my eye in “Helpless,” newly seeing how meaningful it was for this orphan to marry Eliza and finally find a family by joining the Schuylers. Then, at the end of “Satisfied,” after Angelica Schuyler (Marja Harmon) reveals the truth behind her feelings for Hamilton, the last thing we see on stage after everyone except for Angelica leaves are the hands of two dancers at the back of the stage reaching out to each other, but never touching. They drift in opposite directions, beautifully illustrating a love between Angelica and Hamilton that will never be.

But perhaps the most striking realization comes through the exceptional performance of Donald Webber Jr. as Aaron Burr. Webber’s take turns Burr into a man trapped in a punishment worthy of a Greek tragedy. Much like Sisyphus eternally pushing a boulder up a hill, Webber’s Burr seems almost annoyed at times at his role as narrator, cursed to tell his rival’s story on stage over and over for the rest of time as penance for killing Hamilton.

Now, that’s not to say every choice made in this production is successful, and they aren’t aided by a questionable sound mix — an area of theater I don’t often have qualms with, especially not at this level. But there are multiple times in this production where I strained to understand the lyrics — an odd feeling since I, like many in the audience, have known the majority of the words to this musical for years.

Still, “Hamilton” is a technical masterclass from the direction to the design to the choreography to the storytelling. I wouldn’t say “Hamilton” has aged poorly; rather, it has aged frustratingly.

“History Has Its Eyes On You” has likely never felt more poignant than at a time when human rights are literally on the ballot. Then, to watch as Hamilton talks excitedly about crafting the Constitution and building a new nation — while in my mind I simultaneously feel let down by what they built, and knowing we will likely never have the same carte blanche opportunity they had and are, instead, stuck constantly tweaking their 235-year-old rules — is a tough pill to swallow, even delivered in such an entertaining package.

But, as the argument goes, maybe that’s the point. Maybe we should be thinking about these frustrations between bouts of “Hamilton”-induced tears. After all, it was Thomas Jefferson who wrote, “it may be proved that no society can make a perpetual constitution, or even a perpetual law. The earth belongs always to the living generation.” I don’t know that I’d know that, were it not for the conversation “Hamilton” spurred. Truly, I understand the grievances about this show, and agree with a lot of them. But “Hamilton” remains a masterwork that, no matter how long or how closely you look at it, offers a surprise behind each and every brushstroke.

With book, music and lyrics by Lin-Manuel Miranda. Through Sept. 11; Paramount Theatre, 911 Pine St., Seattle; masks strongly encouraged; tickets start at $59; 800-982-2787, stgpresents.org, ticketmaster.com. A lottery for 40 $10 seats for each performance can be entered by using the Hamilton app; details: st.news/hamiltonlottery.