In early 2019 I wrote an article reviewing the research on rent control. At the time, Councilmember Sawant was making a push at trying to get a local rent control measure passed — despite the state law prohibiting it. Earlier this year she published an updated version of her draft rent control bill, though she doesn’t seem to have much (if any) visible support from her colleagues on the Council. Now having narrowly escaped recall, Sawant is making noises about a more fervent push to pass her rent control bill. That makes it a good time to provide an update on my original article, looking at the new research on the topic over the past two and a half years.

It’s worth pointing out up-front that there have been new rent-control laws passed over the past few years in Oregon, California, Minneapolis, Berlin, and a few other places; unfortunately it’s mostly still too early for peer-reviewed research evaluating their impacts (though there are certainly anecdotal observations and no lack of opinion pieces). Most of the recently-published research looks back farther, applies new modeling techniques, or attempts longitudinal studies of the effects of rent control.

What has changed, however, is that the arguments have sharpened — particularly for those advocating for new rent control measures. Since there is strong evidence that rent control prevents displacement in gentrifying neighborhoods, it is now more often being positioned as an anti-displacement and anti-gentrification policy and less as a general affordable-housing policy. There is also a broader recognition that when rent control is imposed landlords respond by attempting to get their units out of the rent-control regime: by evicting the existing tenant if “vacancy de-control” is an option, by upgrading the unit if new construction and units with major renovations are exempted, or by selling the unit or “going condo (effectively removing it from the rental housing market altogether). In response to this, rent control advocates now argue for a package deal: rent price controls plus a suite of laws that prevent landlords from excluding their units from rent control or evading its rules, including eliminating vacancy de-control, restricting evictions, “first in time” laws that prevent landlords from cherry-picking short-term tenants, requiring landlords to offer a renewal at the end of a lease term, and limits on condo conversions. Many of these should sound familiar; while the Seattle City Council can’t enact rent control, it has aggressively moved forward on legislation implementing “tenant rights” bills implementing several of rent control’s complementary policies. Setting the stage for rent control may not be the other Councilmembers’ agenda, but Sawant no doubt knows how important these policies are if she is to eventually get her way.

The latest research also teases out the nuances of one of the critiques of rent control: that it decreases the housing stock. There are usually two reasons given for this: that it discourages construction of new housing; and that it incents landlords to remove existing rent-controlled units from the market by selling them or converting them to condominiums. The research repeatedly and decidedly confirms the latter: over time existing rent-controlled units are removed from the market, causing a net decrease in housing stock. But confirming the former has been elusive: decreases in housing construction have been observed in some locations, but not in others, leaving the results inconclusive. There is some level of agreement that the larger economic context is a confounding factor: economic booms and busts; population growth rates; burgeoning local companies (e.g. Amazon); pro-construction policies, zoning and legislation; and other factors. The details of the rent control regime are also important: for example, in places such as San Francisco where new residential construction is exempted from rent control, there is little evidence that rent control itself suppressed housing construction — but numerous other factors in San Francisco clearly have contributed to a dearth of new rental housing in the city.

The displacement-vs-mobility question has emerged as a key point of debate with regard to rent control. The latest studies show that rent control does, in fact, reduce displacement, keeping people in their homes longer than they would otherwise — hopefully contributing to preserving communities in the face of gentrification. But there are two counter-arguments: first, that many of those same people end up with longer commutes as a trade-off for staying in their cheaper housing. And second, that in the longer term the tenants who stay in their rent-controlled housing are the ones who can afford higher rent anyway, once again mis-allocating the benefit of rent control to those who need it the least. Even the status of rent control as an anti-gentrification policy is up for debate: while some argue that lowering displacement reduces gentrification, a seminal 2019 paper on San Francisco’s rent control regime makes the case that rent control actually contributed to the city’s gentrification.

And then there’s a smorgasbord of research looking at the effect of rent control on the price of housing. Some of the new studies show that in cities where rent control is enacted, it does in fact keep the rent lower in the controlled units than in the uncontrolled ones (though the effect is at least in part explained by the observation that the controlled units are older and lower-quality). But some of the studies also show that comparing cities with rent-control regimes to comparable cities with unregulated rent shows that there is no appreciable difference between rental housing prices in the two; in other words, rent control isn’t an effective long-term regulator of housing prices.

At the end of this article is a bibliography of the recent research papers; but for the moment let’s stay on this question of rental housing prices. There is a widely-held belief, promoted by Sawant and other rent-control advocates, that in Seattle rent has been skyrocketing over the last five years, thus the need for rent control. Let’s look at the data and see what it says (spoiler: it’s not nearly that simple).

A word or two on the data source: we’re going to use ApartmentList.com’s data, for several reasons. First, it provides data on the city of Seattle itself, rather than on the “Seattle metropolitan area,” which usually includes Bellevue, possibly Tacoma or Everett, and other small cities and towns that are all on different paths with their housing and economies. Second, it collects data on what tenants actually pay in rent, instead of using list prices for units when they are offered for rent; that addresses differences in negotiated prices, as well as the fact that only a tiny fraction of Seattle’s rental housing is listed at any given time. Third, they attempt to re-balance their estimates to represent the actual share of “luxury,” “market-rate” and “below-market” units in Seattle’s housing stock. Fourth, it’s what Councilmember Sawant uses for her talking-points, thus we avoid an argument about whose data is better; we’re all using the same data.

Here is ApartmentList’s rent-tracking data for Seattle going back to early 2017. Note: this is not inflation-adjusted; since we are actually trying to observe housing inflation, it would undermine our goal to adjust this to a given year’s dollars. 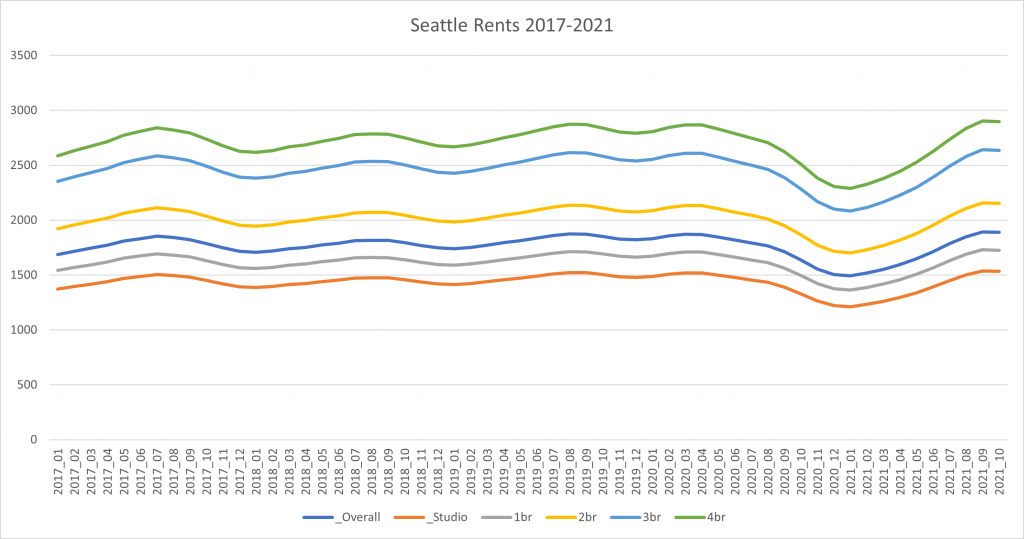 There are some things that jump out at us immediately:

1. Rental prices are cyclical, and seasonal. Specifically, they are on an annual cycle: they go up during the summer and down in the winter, generally corresponding to when people prefer to move. There is a very important corollary to this: anyone who cites changes in housing prices for periods shorter than a year is trying to mislead you into interpreting a part of the seasonal cycle for a longer-term trend.

2. The twelve-month period from summer of 2020 to summer of 2021 was a crazy anomaly — and yet, as of August 2021 we seem to be right back on the regular cycle: prices returned to almost exactly where they were pre-crash, peaked, and then started dropping as we headed into the fall and winter months.

But here’s the larger point: for the last four years rents have been flat (modulo the seasonal cycle). That certainly wasn’t true for the early part of the 2010’s. So what happened? Seattle started building a ton of housing. That started in 2013 but really ramped up in 2017. Here’s the City of Seattle’s chart of annual new housing units for the past decade:

To put this in context: from 1996-2005 there were 26,036 new housing units built in Seattle, and from 2006-2015 there were 47,627 built. But from 2016 to June 2021 there were another 45,687 units added — as many in the past five years as were built in the entire preceding decade. According to the 2020 U.S. Census, Seattle’s population grew by 21% between 2010 and 2020, and the housing stock grew by 19%; Seattle is one of only a handful of cities (including Everett) where housing production came even close to keeping up with population growth, and the majority of it was in the past five years.  This is strong evidence for the consensus view among economists: the most important factor influencing housing prices is simply supply vs. demand. When housing ramped up in Seattle, rental prices stayed flat despite the surging population. And the most recent data is showing that both housing production and population growth in Seattle have tapered off from their peaks; we’ll see how that plays out as we (hopefully) come out of the pandemic in 2022.

None of this suggests that rent control won’t be seductive, and popular, in Seattle where over half the households are renters and nearly half of those renters are rent-burdened (paying more than 30% of their income in rent). And as the research shows, the primary beneficiaries of rent control are incumbent renters: those already here, already renting.

If Sawant runs into headwinds trying to get her bill through the City Council, don’t be surprised if it is repurposed into a ballot initiative in a move both to leverage the likely support among young renters and to continue the streak of lucrative election campaigns by Sawant and her supporters.

Here is a list of recently published research on rent control:

Thanks for reading!  We hope you found this article valuable.