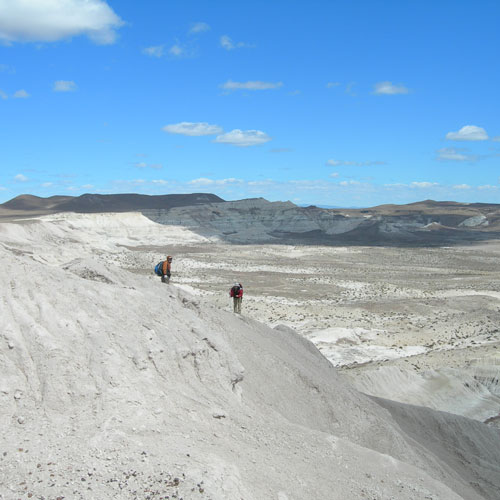 Regan is part of a team led by Caroline Strömberg, Burke Curator of Paleobotany, that is studying 40 to 18 million-year-old plant and animal fossils found in Patagonia, Argentina. “This was a time with major climate change and some extinction events, so we really want to understand how vegetation was affected by these changes.”

To understand the impact of climate change on Patagonia’s vegetation, they set out to reconstruct what types of vegetation existed in ancient Patagonia. To collect data, Regan visited Costa Rica—which has a modern climate similar to that of ancient Patagonia.

The data she was after? Phytoliths—tiny, glass-like fossils left behind after plants decompose in soil.

With the sounds of birds and bugs providing constant reminders of the ecosystem surrounding her, Regan carefully gathered more than 200 soil samples filled with millions of phytoliths and photographed the surrounding vegetation.

Since the trip to Costa Rica, Regan and undergraduate student Aiden Loeser processed and examined the tiny plant fossils (phytoliths) in these modern day soil samples to help understand what ancient forests of Patagonia looked like millions of years ago. And here is what they discovered.