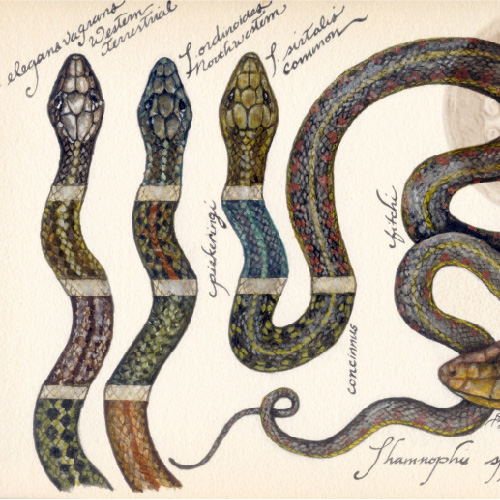 Much of your research focuses on variation within a species and how a population might adapt to the world around them. Do you like showcasing these themes in your illustrations?

While illustrating the Herps of Cascadia, I really want to emphasize that variation within species. I wanted to showcase diversity beyond what you see for a species in a reference manual or a field guide, which often show one or two different morphs. I wanted to explore the color, and pattern diversity. I think this is where my research interests come in–centering on this intersection between ecology and evolution and how intraspecific variation (variation within a species) is really a crucial component of that intersection. That variation, that diversity within species has really been the inspiration behind the herp illustrations.

Do your illustrations ever accompany your research?

My most recent paper was the first paper where I used my watercolor illustrations in the figures, and I want to do that a lot more! People seemed really excited about it. That paper was on stickleback fish and looking at their evolution as a result of climate change in California. I think one of the things it seemed to do was get people interested in the research. Personally, I get really excited about data visualizations and concepts in papers, so I kind of pride myself on figuring out how to do that.

I think having the artistic component layered on top of science can be really gripping for people. Hopefully they see the figures and are excited to open the paper and look at the results. Visualizations and science art are great avenues for outreach too because you get people interested in not only the beauty of nature, but also in the beauty of someone’s interpretation of nature.

There is a long history of wildlife biologists and naturalists using illustration to record the world around them. Do you have any artists that you draw inspiration from?

One of the things that I think is a bit of a tragedy is that you always know papers’ authors, but you don’t often know the biological illustrators. I often find myself really appreciating illustrations themselves. I recently found this book, “Explorers Sketchbook: The Art of Discovery & Nature” that showcases different explorers and their illustrations. I even found a few female historical naturalist-illustrators, which seems to have been pretty rare.

One I am especially drawn to is Maria Sibylla Merian. She did this really famous illustration which I’ve seen around before and I didn’t realize was done by a woman back in the 1600s. It has been really cool learning a little bit more about this tie between natural history and biological illustration and how that was so closely intertwined for the early explorers and early naturalists.

What would you say to someone who might be interested in trying their hand at animal illustrations? What’s the best place to start?

One of the things that I’ve found really helpful is to look at the skeletons of animals and to see how they fit together and how they work though I’ve never really done that in a structured or disciplined way. For me, being interested in the natural world and how things move and work has always been really helpful for me. For this series in particular, I actually get a lot of inspiration from iNaturalist! I look at all the photos and records of herps in Washington, making note of their variation in patterns and color – so if you have logged a herp photo to iNaturalist, there’s a good chance I’ve used it as reference material!

For somebody who is just getting into illustration, I would suggest finding other illustrators for inspiration. Also just spending time in nature and trying to draw things just by observing them. Still, a lot of my illustrations are referenced from either my own photographs or from different photos online, which might be cheating in a way, but I think of it as a natural progression of photographic art being translated into illustration art!