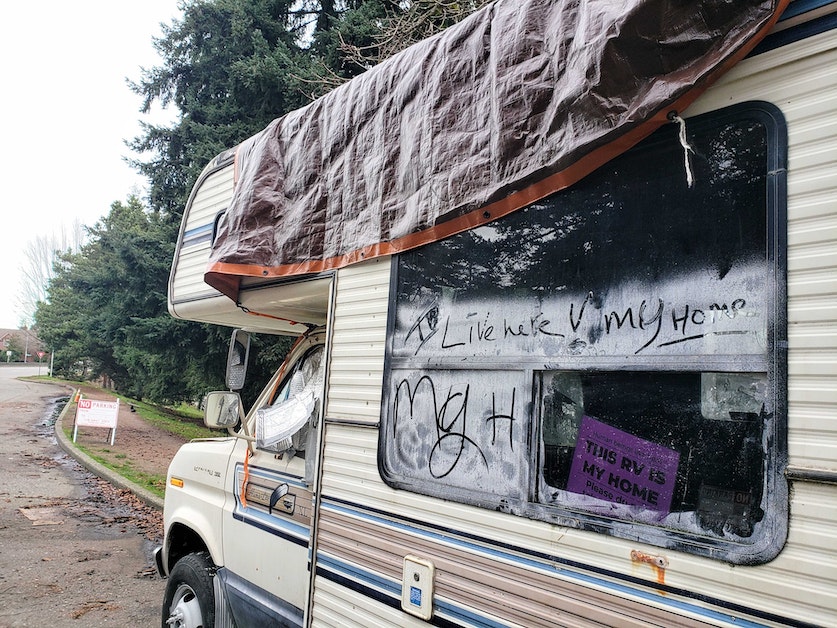 This week the City of Seattle is clearing a homeless tent encampment at the park, plus the RVs that have been parked nearby for months. The removal comes less than a week before freezing temperatures are expected in Seattle.

On Monday afternoon, people scrambled to get their RVs running. Notices posted by the Seattle Department of Transportation warned they have until this Friday to move, or risk getting their home towed.

Some people worked on their cold engines with bare hands. Kendall, who only shared her first name with KUOW, used an old garden hose to siphon gas out of her generator and into her RV. Multiple other generators were scattered around the area, some chained to a tree, where people have been living for months.

This sweep, as these clearings of homeless encampments are called, is the latest in a series that stretches back to 2015, when the City of Seattle first declared a state of emergency. The Green Lake encampments, which circled the lake, became increasingly contentious, as playfields were closed to school-aged soccer players and cross country runners. And it became a top issue in the mayor’s race, with one candidate pushing for a sweep, and the other saying the park residents should not be forcibly moved.

This Green Lake sweep is a symptom of fading housing affordability, and Seattle’s response to the soaring real estate market. The city pledges to build more units for the unhoused, and it has, but not at the rate at which these people are pushed out of housing they can no longer afford.

Kendall wasn’t thinking about the bigger picture though — she was thinking about where she’ll move her RV once she gets it running. “I just gotta hurry and get outta here,” she said.

The city’s transportation department says the clearing is happening because of public health and safety concerns with the dozen or so RVs on West Green Lake Way.

Seattle said it closed the street on Monday to clean up “trash, debris, and spills.”

After Friday, per an emailed statement, remaining RVs that are “derelict, abandoned, or pose a serious public health or safety risk may be towed.”

Since October, at least 15 people who were living in the park have been referred to a shelter, according to a statement from Seattle Parks and Recreation.

Among the residents was Lamar Rome, who said he lived in a tent at Green Lake Park for over a month. After being told to move on Monday, Rome pitched his tent across the street.

“I had to move from down there,” Rome said. “They said we have to move over the hill, up on the hill, or wherever.”

Rome does want to get into one of the city’s new tiny house villages, but he expects he’ll have to move his tent again before that happens.

“If you don’t like moving, this ain’t your thing,” Rome said with his sleeping bag under one arm.

This encampment clearing, happening the week of Christmas, comes just before freezing temperatures and possible snow are forecasted in Seattle, and as a record wave of coronavirus cases are expected.

In a tweet, Seattle Human Services said the department is “currently looking at a potential emergency activation beginning this weekend.”