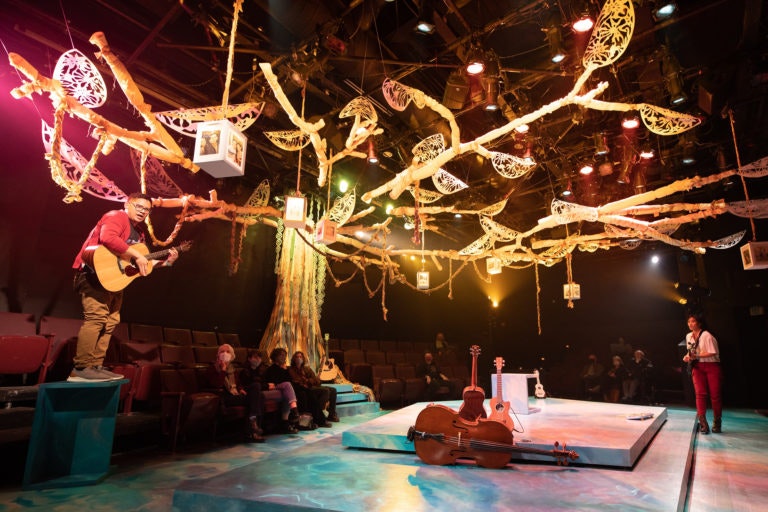 A family of secret warriors is protecting Seattle from monsters. That’s the premise of a new musical on stage at ArtsWest Playhouse. The story comes in part from the experience of a Filipino-American writer-performer growing up in Seattle.

The show is called “We’ve Battled Monsters Before.” It’s not about the monsters. It’s about what happens to you when you battle.

The two main characters are Filipino-American siblings. Diego’s classmates tell him the lunch his grandmother packs him is “gross.” His sister Adarna’s classmates laughingly make anagrams out of her name. The brother and sister respond to the bigotry — and to their insecurity — by learning never to apologize. Sadly, they turn their resentment against each other. Songwriter Justin Huertas says he lived this story, growing up in white spaces in Seattle.

Huertas said he grew up hearing other Filipino-Americans use the phrase “Filipino pride.” But he didn’t know what there was to be proud of. He just knew the Philippines had been overrun, colonized, and had lost their identity.

“Anytime I brought something up like a recipe that I liked, my friends would be like, ‘Oh, yeah, that’s from China, right?’” Huertas said.

“Adobo is a really huge Filipino style of cooking, and friends would say, ‘Right, that’s from Spain.’ I meant it’s true! And I would get defensive, like, ‘Yeah, but it’s also ours!’

“That led me into this spiral of: “Wait … what IS ours?’” And so, the characters in this musical battle monsters, inside and out. But will they figure out what the real enemy is?

“We’ve Battled Monsters Before,” is onstage at ArtsWest Playhouse in West Seattle through December 26th.