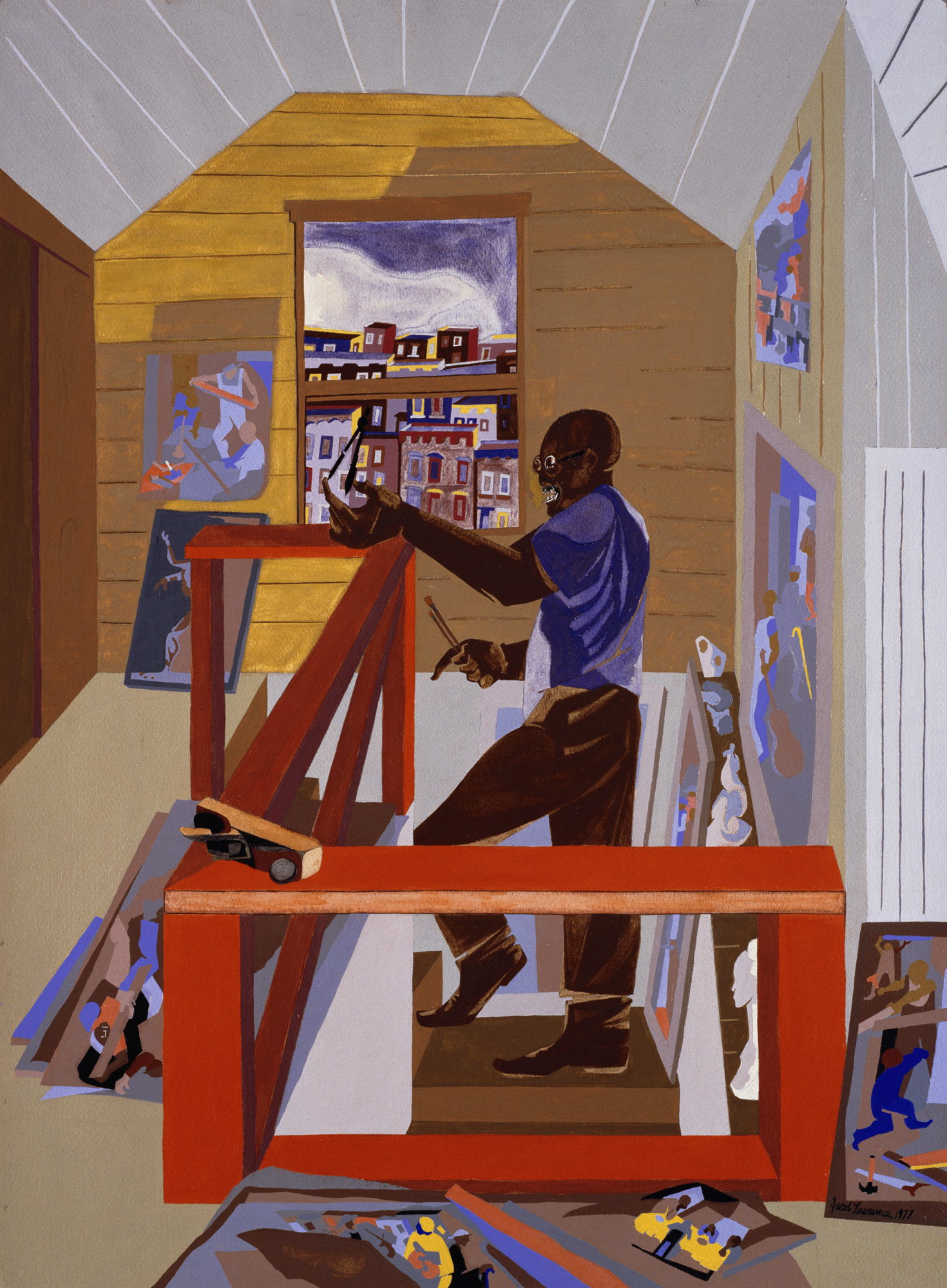 One of the most influential Black American artists of the 20th century, Jacob Lawrence spent the latter years of his life living and working in Seattle, serving as a professor at the University of Washington’s School of Art. In 1977, seven years after his move, Lawrence painted The Studio, depicting himself in the attic of his Seattle studio. The Studio narrates Lawrence’s artistic journey of growing up in Harlem, moving westward, and his subsequent artistic development. Outside the window, Harlem tenement buildings scatter the view, connecting his relationships between Seattle and New York. In a 2000 interview, Jacob Lawrence spoke about this painting:

Yes, that’s my studio here, in Seattle. Not in this apartment, but it’s Seattle. And this is what my studio looked like going up the steps. And my neighbor, our neighbor is an architect. And these buildings back here bring somewhat of the tenements of New York. In reality, this is an empty wall. So I decided to put that back, to use that as a sort of symbol of my thinking of the big city, of New York.1

Lawrence grew up in Harlem after his mother relocated the family there in 1930 when he was thirteen years old. Wanting to encourage her son’s creative expression, his mother enrolled him in an after-school arts program shortly after their arrival in New York. Due to financial hardships, Lawrence was unable to finish his high school education. Yet, he continued to take classes at the Harlem Art Workshop, where he was mentored by the painter Charles Alston.

Lawrence’s upbringing in Harlem was one of the most formative periods of his life, and he frequently referred to those memories and experiences in his work, regardless of his geographical location. He specialized in scenes from Black American life and culture, taking inspiration from the stories of elders within his communities and transferring them into his paintings.

While best known for his paintings of workers from various professions, The Studio offers a glimpse into his work as an artist and teacher as he welcomes the viewer into his own studio. Lawrence referred to his style of painting as “dynamic cubism,” inspired by the colors and shapes of Harlem. The Studio showcases his use of vivid colors, bold linear movements, and mastery of geometric form.