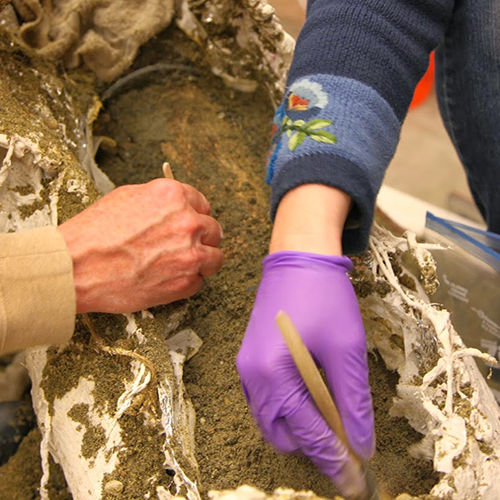 Before removing the tusk from the AMLI Residential construction site in South Lake Union, Burke paleontologists made it a “field jacket.” First, they covered the tusk in aluminum foil. Then, they added layers of burlap strips soaked in water and dipped in plaster. Then they placed 2×4’s along the tusk and added more layers of plaster-dipped burlap. Once the plaster dried, the tusk was ready to make the trip to the Burke Museum.

Burke paleontologists got the tusk out of the ground safely (hurrah!) and to the museum in about a day and a half on Feb. 13 and 14, 2014. But that was just the beginning.

Step 2: Give the people what they want

The tusk made its public debut on March 8, 2014 at the Burke Museum’s Dino Day, where one side of it was visible. After that, it will be fully encased in plaster (see step 3).

Step 3: Button it up