Curate your own film journey! 140,000+ choices await your eyes in-store or by mail!

Thank you for your service, Murphy. Murphy Brown/CBS

Unstreamable is a column that finds films and TV shows you can’t watch on streaming services in the United States. Last week, we announced a few updates to the column, so check that out if you haven’t. 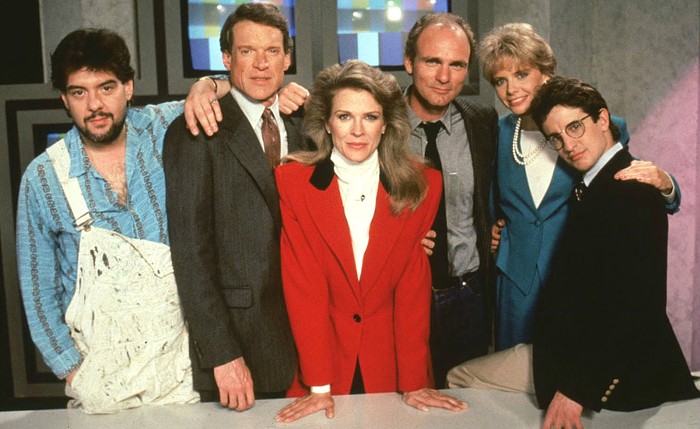 The creators of Murphy Brown really screwed themselves over with what must’ve seemed at the time like a great idea: Incorporate classic Motown songs into just about every episode of this sitcom about life behind the scenes at an evening news show. How could they have known about the tangled thicket of music clearances that streaming services would require thirty years in the future? One of the very qualities that made this show such a hit now keeps it locked away in a vault until someone can figure out how to clear all those rights, or until Respect enters the public domain in 2087, whichever comes first.

But if you do manage to track the show down, one of my favorite episodes is 1994’s “The Anchorman,” in which Jim decides to open a bar in the tradition of the old journalist watering-holes of his youth. (Like many aspects of the news industry, this is a now-vanished tradition: In decades past, reporters often had a particular bar where they would gather to talk shop and gossip — Lowell’s in Pike Place Market was once such a place.) Jim’s place is an instant hit, but it gradually dawns on him that its success is for reasons other than what he anticipated, and soon everyone receives an unexpected crash course in gay history.

Smartly written with sweet characters, Murphy Brown was always a jewel; but by this season 6 episode the cast and crew were so comfortable inhabiting the world of the show that there’s an affectionate familiarity to the proceedings like the best episodes of The Mary Tyler Moore Show. That this is one of the first American sitcoms to show the interior of a gay bar (yes yes, Taxi, Maude, and Murder She Wrote all got there first, but there were few that dared in the intervening years) is an added plus. MATT BAUME

The first season of Murphy Brown is available to rent at Scarecrow Video.

Japanese films of the 21st century, follows four teenage girls as they make a band that performs music from the famous Japanese punk band

.” The film that plays out is thoughtful and joyous, feminist in its approach, and while it can at times be slow-moving, overall it rocks.

I was late to this movie, first noticing it through The Linda Lindas, which you should know from this video. NPR confirmed that the American band, which is creating an album with Epitaph Records, is named after Linda Linda Linda. How did these Zoomers, aged 11 to 17, find this deep cut, which came out a few years before the youngest member was born? Maybe good taste just runs in the family—Eloise Wong, the band’s bassist and singer, is the daughter of “Chinatown punk savior” Martin Wong. He helped create the Asian American pop culture magazine Giant Robot.

I’m hoping these punk kids will bring a renewed interest to this indie gem (copies are currently pretty pricey). But while we wait for someone to release this on blu-ray, The Beacon is hosting a rare screening of it next Saturday. That little theater sells out quickly, so get tickets while you can! CHASE BURNS

Available for rent at Scarecrow Video and Netflix DVD.