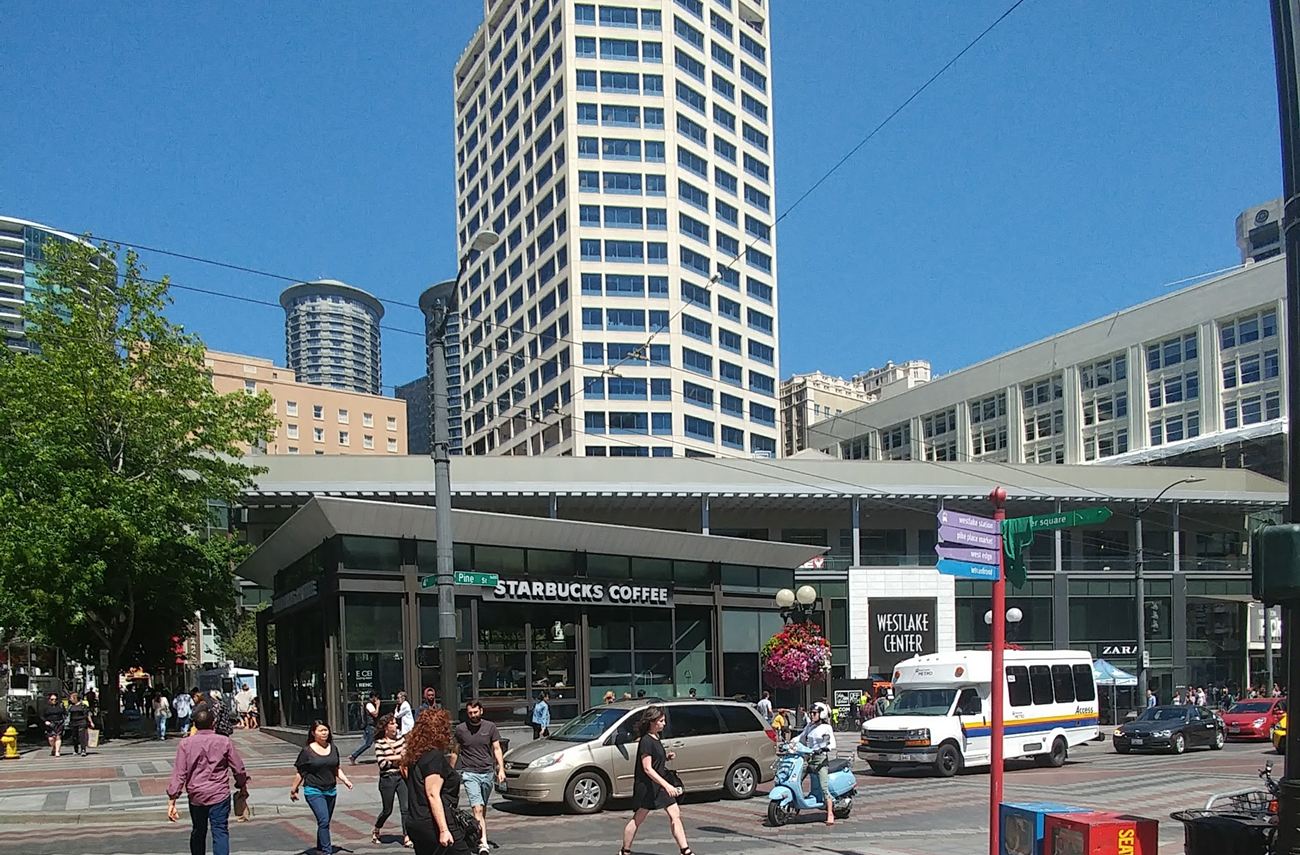 What purpose is Jon Talton’s Seattle Times commentary “Goodbye to Starbucks at Westlake Park and so much more” supposed to serve? He trots out the biggest hits of the Seattle Is Dying movement: too much crime, too many radicals on the city council, and not enough compassion for the police, whose commitment to the public is made of the same stuff as gold or the armor of knights. All of these grievances, according to Talton, now fill the “empty space” in the heart of Westlake Park.

There was once a Starbucks here; now there is a “mute testimony to all we’ve lost.” I understand that Talton writes mystery novels. He is indeed prolific in this regard. A crime, a maze, a solution. But what about the curious case of the missing Starbucks in downtown? Was it crime? Was it unionization? It was, according to the mood of Talton’s post, a city that was spoiled rotten, a city that didn’t know how lucky it was, a city that could have had it all: pragmatic liberals and a thriving corporate community. But now it has an abandoned building where, at one magical moment, “customers came and went unmolested.”

The best mystery stories end with a revelation about the economic and political state of a town, city, or society in general. Think only of Wilkie Collin’s Moonstone, a 19th-century novel many believe established the form of the detective novel. The plot’s key elements: A magnificent and priceless diamond is stolen from an English country manor not long after a young lady’s birthday party. Sergeant Cuff, a lover of roses, is hired to investigate the crime. A working-class woman drowns in quicksand. The power of the mystery’s solution is principally found in Great Britain’s raw robbery of India’s wealth, represented by the stolen diamond.

The detective fiction of the Victorian moment is filled with anxiety about the source of its country’s prosperity. It is not hard work. Sure ain’t thrift, or “the reward for waiting,” as the economist Alfred Marshall called it. You can also forget all of that claptrap about free trade and enterprise. It’s state-sanctioned crime. China was, it must be remembered, forced to be acquainted with Her Majesty’s drug dealers. Wilkie Collins was addicted to opium.

Starbucks is gone from Westlake Plaza. Why? The a large part of the present economy is defined by a marginal (not overwhelming, but also not insignificant) post-pandemic increase of labor’s power. As a consequence, the struggle between management and workers has intensified in many sectors. In this fact, we can find the real function of the Fed’s determination to keep raising interest rates. It’s not to make workers spend less, and thereby induce price deflation or stabilization. It is to attack workers themselves. It is a program that aims to transfer power from labor to capital. The relationship between high prices and consumer spending doesn’t exist in any meaningful way. But it does with the interests of corporations and shareholders, who are making out like bandits, or the drug dealers Queen Victorian backed with state power.

In short, you will learn little that is of any economic or political value in Talton’s post. Starbucks most certainly did not close because of crime, and, besides, crime does not exist in vacuum. It is a socially determined phenomenon. What you will not find in our neoliberal city is a key issue or development that does not boil down to class struggle. The same is true for the Moonstone, which has this lovely and painterly passage:

The last of the evening light was fading away; and over all the desolate place there hung a still and awful calm. The heave of the main ocean on the great sandbank out in the bay, was a heave that made no sound. The inner sea lay lost and dim, without a breath of wind to stir it. Patches of nasty ooze floated, yellow-white, on the dead surface of the water. Scum and slime shone faintly in certain places, where the last of the light still caught them on the two great spits of rock jutting out, north and south, into the sea. It was now the time of the turn of the tide: and even as I stood there waiting, the broad brown face of the quicksand began to dimple and quiver—the only moving thing in all the horrid place.

I saw the Sergeant start as the shiver of the sand caught his eye. After looking at it for a minute or so, he turned and came back to me.

‘A treacherous place, Mr. Betteredge,’ he said; ‘and no signs of Rosanna Spearman anywhere on the beach, look where you may.’

He took me down lower on the shore, and I saw for myself that his footsteps and mine were the only footsteps printed off on the sand.