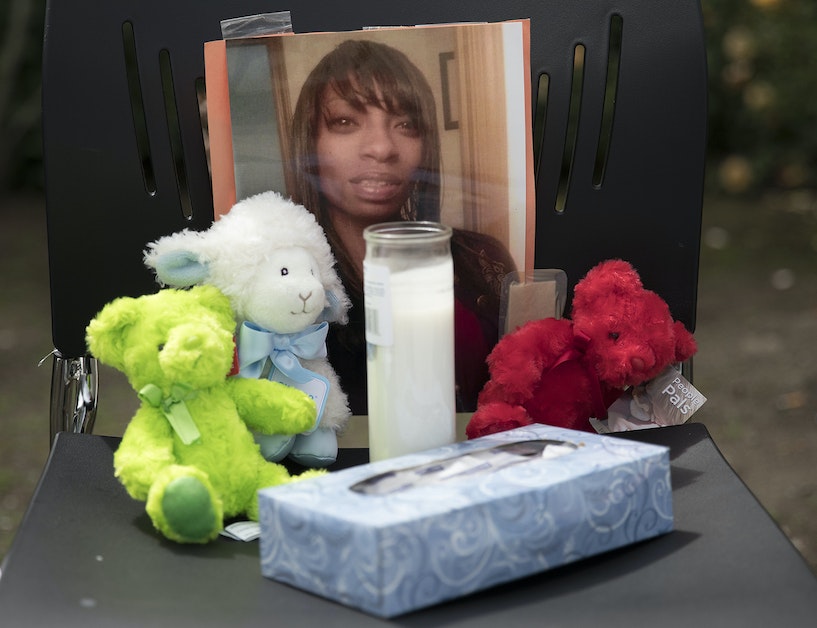 An inquest began Tuesday into the 2017 Seattle Police killing of Charleena Lyles, a 30-year-old Black mother with mental illness. Two white officers gunned Lyles down in front of her children.

Her death sparked ongoing public outrage into police violence against Black people and those with mental illness. The petite mother of four was pregnant when she called police to her apartment to investigate an alleged burglary. Minutes later, she was dead.

Officers Jason Anderson and Steven McNew, who responded that day, later said Lyles ended up jabbing toward them with a pocket knife. They both shot her, hitting her seven times.

On the first day of the inquest, most of the testimony came from Seattle Police Detective Jason Dewey with the department’s Force Investigation Team, which looks into officer-involved shootings.

Attorney Karen Koehler, who represents Lyles’ family, questioned Dewey about the officers’ plan for dealing with someone with mental health issues, given that before they went to the home they were aware of a police encounter with Lyles earlier that month in which she held scissors in a menacing fashion and told officers that she and her daughter were going to morph into wolves.

Dewey acknowledged that the officers made no plan other than not letting her get behind them.

After discussing the suspected burglary with Lyles at her apartment, officers reported that her demeanor changed. Officer Anderson reported that Lyles made a sudden motion and he saw the glint of a knife blade. He reported to Dewey at the time that he sucked his abdomen in as Lyles jabbed it toward his stomach. Shortly thereafter, she approached McNew with a knife, too.

Dewey described to the jury what happened next, reading from the transcript of audio recordings from the incident: Officer McNew yelled “Taser!” and Officer Anderson replied, “I don’t have one.”

Instead, the officers told Lyles to get back repeatedly, then shot her seven times. As she lay bleeding on the floor, her year-old baby crawled over to her and climbed atop her body, police records show.

The killing led to calls for police reform in dealing with citizens with mental illness, and for the use of conflict de-escalation tactics by specially-trained first responders.

When Koehler asked Dewey when life-saving measures were first taken, he responded that his investigation found that the next officer on the scene was the first to try to revive Lyles.

“Okay, so let me make sure I’m understanding. Officer McNew and Officer Anderson did not perform any life saving measures on any level?” Koehler asked.

“Based on their statements and audio, no, it does not appear that way,” Dewey replied.

Later in the day, jurors heard from former Seattle Fire Department medic Jason Abrahamson, who testified to arriving at a disorganized scene and assisting with lifesaving efforts, unsuccessfully.

Jurors will be asked to determine whether officers followed protocol in killing Lyles. The inquest is only the second of its kind since King County Executive Dow Constantine paused inquests to reform the process to make it more fair to families.

The new process requires officers to testify at inquests, although they can invoke their Fifth Amendment rights and not answer questions that may incriminate them.

The county’s new inquest model also asks jurors to decide whether police followed the law and department protocol in their actions. Previously, juries were asked simply whether officers reasonably feared for their lives.

The state Supreme Court upheld the inquest reform in a unanimous vote last year, allowing King County to hold inquests for the first time since 2017.

Lyles’ family reached a $3.5 million settlement with the city of Seattle in a wrongful-death civil suit last fall.