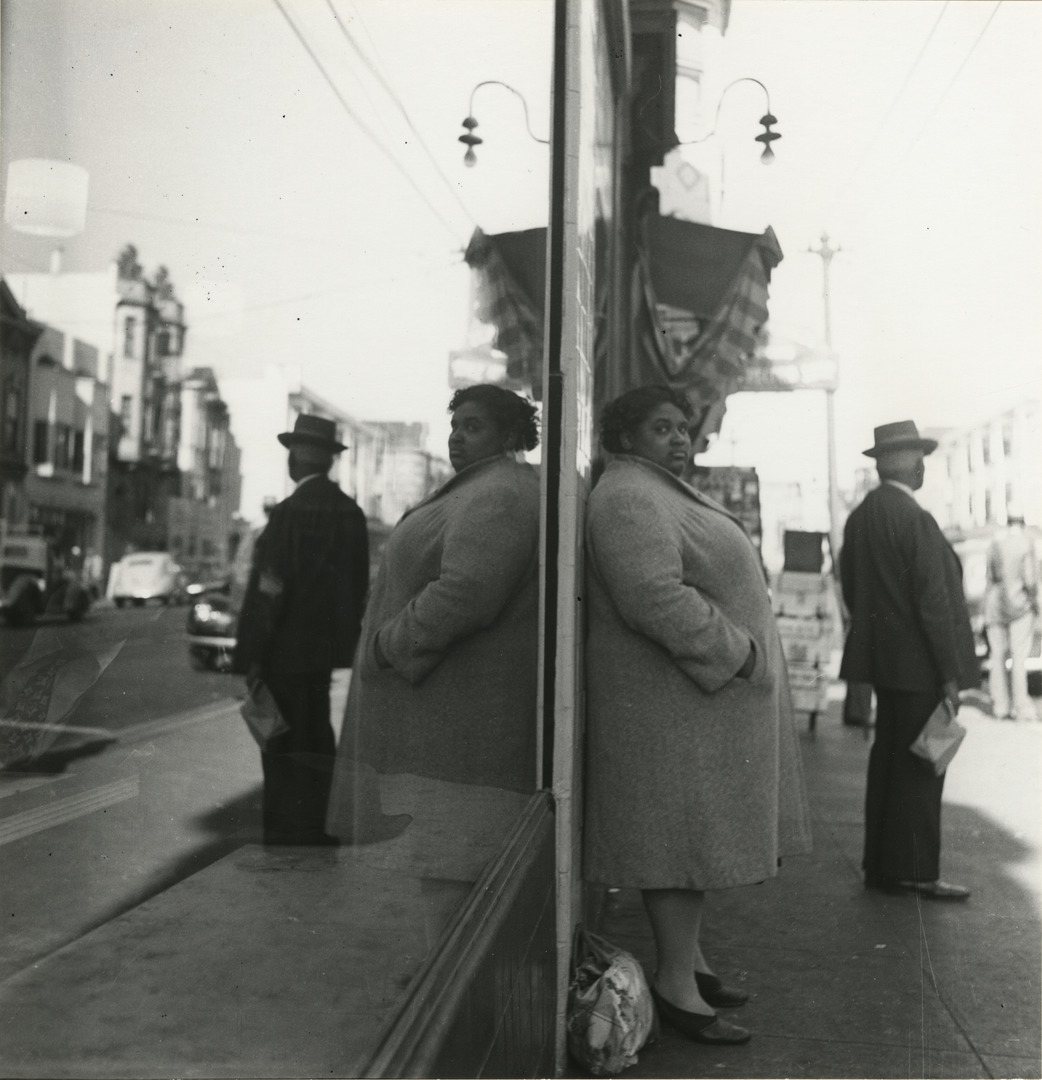 Imogen Cunningham often took photographs of unsuspecting strangers on the street. Uncomfortable with confrontation, she found beauty in capturing daily public life without interference. At times, she used windows, spun around, or bent over and pretended to be searching for something in her purse to distract from the sound of her camera’s click. She called these surreptitious photographs “stolen pictures.”

Double Image, Sutter St. and Fillmore marks a stark contrast from Cunningham’s typical street photographs. In this image, her subject—a Black woman dressed in a long coat, stockings, and heels—has spotted Cunningham. Waiting for the bus, her right eyebrow is raised as she looks directly into the camera.

The woman’s stare is intensified as the image is cleverly reflected off of a storefront window, dividing the composition down the center, and creating a “doubled” illusion. Cunningham was fascinated with this effect and often used mirrors or glass to create this perspective.

In this audio recording produced by the J. Paul Getty Museum, Chris Johnson, chair of the photography department at the California College of the Arts, discusses Cunningham’s “stolen pictures” and the changing dynamic shared between Cunningham and her subject after being spotted. Tune in to all 13 recordings as part of the free smartphone tour of Imogen Cunningham: A Retrospective when you visit the exhibition at our downtown location through February 6.

Narrator: Taken in Cunningham’s San Francisco neighborhood, this photograph captures two figures waiting for a bus. On the right, a man wearing a hat holds a paper bag. In the center, a woman stands dressed in a winter coat with her purse at her feet.

Chris Johnson: She’s giving Imogen a very strong direct gaze and there’s nothing reticent about that gaze and I think Imogen liked that because she was a strong outspoken woman herself.

Narrator: The image is doubled in the reflection of the storefront window on the left. Cunningham was fascinated with this effect, something she first encountered in the compositions of eighteenth-century Japanese prints. She often used mirrors or glass to create this perspective. The doubling effect places the woman in the center of the image and creates a dynamic between individuals, including the photographer.

Chris Johnson: The implied relationship between the photographer and the woman who’s giving her that gaze… between the black woman and the white man who is presumably ignoring both of them, Imogen and this black woman are in their own world. The white man is in his other world. He has his back turned to us. So Imogen is affirming her allegiance to this black [woman] and I really think the meaning of the image resides there.

Narrator: These “stolen pictures”, as Cunningham called her street scenes, were sometimes taken without the subject’s knowledge and represented a stylistic departure for her. But in this case, the central figure directly confronts Cunningham, and us.

Chris Johnson: Isn’t this a clear example of photographic seeing, you know, the way that the camera sees differently than the way eyeballs see?