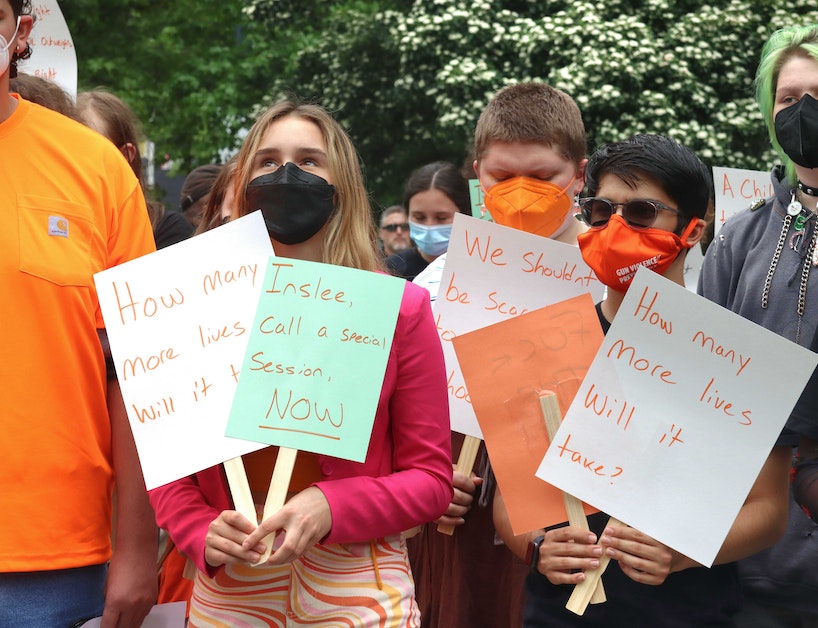 Students across King County rallied at the Seattle City Hall Plaza with a message to the governor: “Washington Governor Inslee, call a special session and ban all semi-automatic rifles.”

Syd Walter, a 17-year-old senior at Nova High School in Seattle, said she has had enough.

“I am terrified of going to school,” Walter said.

Walter said these are some of the questions that constantly run through her mind while at school: “Is that person going to shoot me today? Am I OK to sit in this auditorium? Will there be a bullet that pierces my neck? Am I safe? If not, do I know where to hide? Do I know how to play dead? Will I be able to smear my classmate’s blood on myself to make myself look dead?”

Students are also demanding for more mental health professionals, one for every 200 students across all Seattle Public Schools. They want the professionals to also reflect the student body in terms of race, gender, and sexuality.

“How are we as students suppose to deal with the nation’s shortcomings alone? ” Walter asked. “This is a time in our lives where we are supposed to feel safe. It already feels unsafe because of the pandemic. This is no exception.”

Walter also said she is worried about younger students. She said she recently babysat two young girls after the Uvalde shooting in Texas, where 19 elementary students and two teachers were shot.

One of the girls, a 7-year-old, pointed at Texas and said, “Lots of people are dying there.” Walter said the young girl understood she was close in age with the children who were killed. She then said she was afraid of going to school.

“That broke my heart,” Walter said.

At the rally, students chanted and took turns sharing stories.

Chetan Soni, a 16-year-old sophomore at Lincoln High School in Seattlea member of the Seattle Student Union, was among the students who shared a poem.

Here is an excerpt of what he wrote and recited at the rally:

But because like so many others, I had become shut off and numb.

So I just write: When will it be enough?

When will we ever not live in a world where we have to speak, ask, no, beg, politicians to take us seriously?

When will you open your eyes and see that guns are the issue? To say that our lives shouldn’t be a commodity and that our students shouldn’t have to organize in order to live? We are LOUD AND CLEAR now, you just don’t want to listen.

Do you justify mass shootings with the politically correct answer or the obvious one?

There’s so much to write, so many posters to make:

That is how many students are exposed to gun violence in schools across the U.S.

So, how can I make three million posters alone? I can’t.

The protest was organized by Seattle Public School students and the Seattle Student Union, which represents students across the district. The Alliance for Gun Responsibility, an anti-gun violence group based in Seattle, also partnered with the students to help organize the rally.