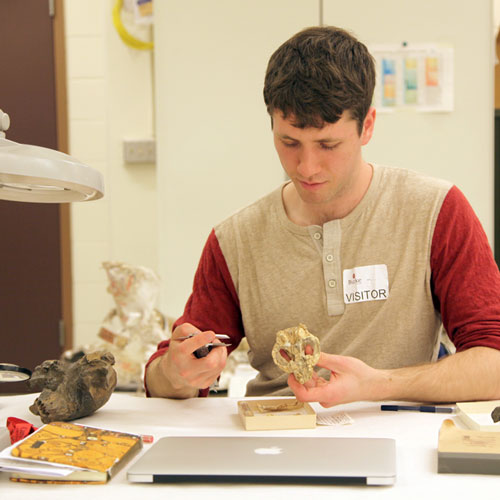 In 2009, Natalia Rybczynski and colleagues reported on the discovery of Puijila darwini, an extinct animal often cited as a ‘missing link’ between modern seals and their four-limbed, land-dwelling ancestors. The fossil is currently housed at the Canadian Museum of Nature (Ottawa).

Puijila was found in the Canadian High Arctic, which may have served as a centre of origin for this group of marine mammals. The arctic, at the time, was warmer than it is today, and offered Puijila a chance to get its toes wet in isolated freshwater ecosystems, before venturing out into the predator-infested oceans.

I am studying fossils at the Burke Museum as part of my effort to reconstruct how Puijila moved—both on land and in water—to understand how such a creature was able to adapt to an aquatic existence, and how that transition affects the swimming behavior seen in modern seals, sea lions and walruses. All three swim in different ways. Seals sway their spine horizontally and use their hind-flippers to propel them, whereas sea lions produce thrust with their fore-flippers. Walruses display an intermediate swimming form.

Identifying geometrical aspects of Puijila’s body plan that affect swimming behaviour will shed light on how and when swimming evolved in this group.