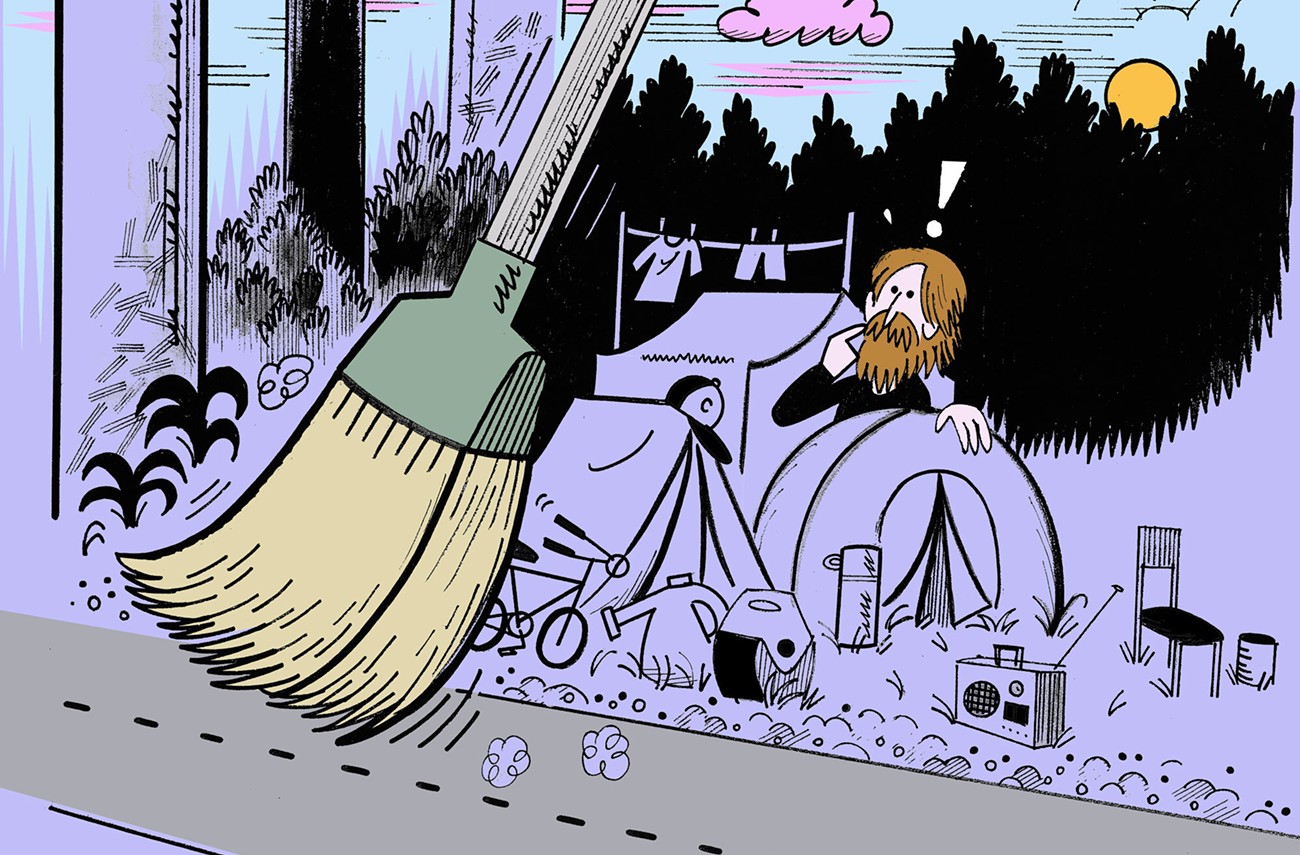 The Department of Commerce asked nonprofits from five counties, including King County, to submit spending proposals for a $144 million pot reserved to clear encampments from state-owned property, much of it alongside highways.

The accepted proposals, which were due Thursday, will signal whether Washington plans to double-down on disruptive sweeps or to embrace promising alternative models, such as the one offered by King County’s JustCare program. The anti-sweep crowd says the state’s proposal request form basically welcomes both options – the best they can do is show the sweep-happy counties that there’s another way.

“Sweeps will occur unless those of us who oppose them offer an alternative response that actually addresses the health and safety issues at sites. And so that’s what this hopefully represents an opportunity to do,” said Lisa Daugaard, who oversees JustCare through the Public Defender Association.

Though living in tents next to roads presents dangers to all, sweeps do not reduce that danger long-term. Though violently displacing unhoused people does remove them from parks or right-of-ways, the government will just end up sweeping the same people over and over again until their core needs are met. Daugaard said that a slower approach that connects people to housing will yield better, more sustainable results. And she’s got the numbers to back her up.

After the Seattle City Council failed to fund JustCare in perpetuity, the program, which initially offered services to encampments as a slower alternative to sweeping, shifted focus to public rights of way. So far, as a state contractor, JustCare has served encampments at the I-5 North onramp at Olive and at the I-5/520 interchange, offering shelter to about 14 people, according to Daugaard.

She said she hopes the success at the two trial sites will show the state a path forward that doesn’t rely on sweeps.

“If that ends up being a good experience for [the state], hopefully they will remain willing to commit those state funds to not do sweeps. That’s the goal for us: show that a non-sweep approach is viable,” Daugaard said.

But the Department of Commerce’s request for proposal (RFP), a document governments use to solicit bids for a project or service, leaves the door wide open for all kinds of strategies, including sweeps, even after Democrats in the State Legislature tried to exclude sweep programs from the pot of money.

Last session in Olympia, Gov. Jay Inslee requested bills to remove unhoused people from state-owned property. Bellevue State Sen. Patty Kuderer sponsored the bill to do just that, but she couldn’t secure support from her Democratic colleagues due what Seattle Rep. Nicole Macri called “problematic language” that could lead to more sweeps.

Macri said she strongly felt the state should invest in helping unhoused people who camp on state property, a task it historically punted to local jurisdictions, so she worked with the Governor’s staff and the Department of Commerce to revise the bill into a budget item that authorized a broader range of approaches.

“If you’re approaching it from ‘I’ve got to clear up this area’ versus ‘I need to do what I can to assist this person here,’ the interventions you come up with are just going to be different,” Macri said.

Despite the work to change that language and to reserve half of the money for permanent housing, Macri found that the language used in the RFP reverted back to the original problematic framing: “The first thing [the RFP] said is we’ve got to move people off these properties. And the second thing it said is we have to assist these people,” she said.

Even though King County nonprofits largely do not want to use the money for sweeps, many organizations have contacted the Department of Commerce with their concerns about the RFP. Both Washington Housing Alliance Action Fund (WHAAF) and Seattle/King County Coalition on Homelessness sent the department letters to share concerns that the RFP does not emphasize permanent housing as directed by the proviso, and that the RFP does not explicitly prohibit the criminalization of homelessness. In fact, the document requires organizations to track arrests.

Both letters said the department expected much too tight of a turnaround, giving organizations less than a month to stand up their programs. Macri said the timeline leaves her worried that “we’re just going to get these slapped-together, half-baked ideas for $144 million in state resources that aren’t going to be thoughtfully deployed to have sustainable innovations.”

With no language prohibiting sweeps and with such a quick timeline, Daugaard said “no doubt” organizations in other counties will propose sweep programs, because they take less work. King County has the advantage of already having the JustCare team to deploy. Other counties have similar programs on a smaller scale, though, and Daugaard hopes those programs apply for the funding. But right now, all JustCare can do is show that there is a different way to approach encampments.