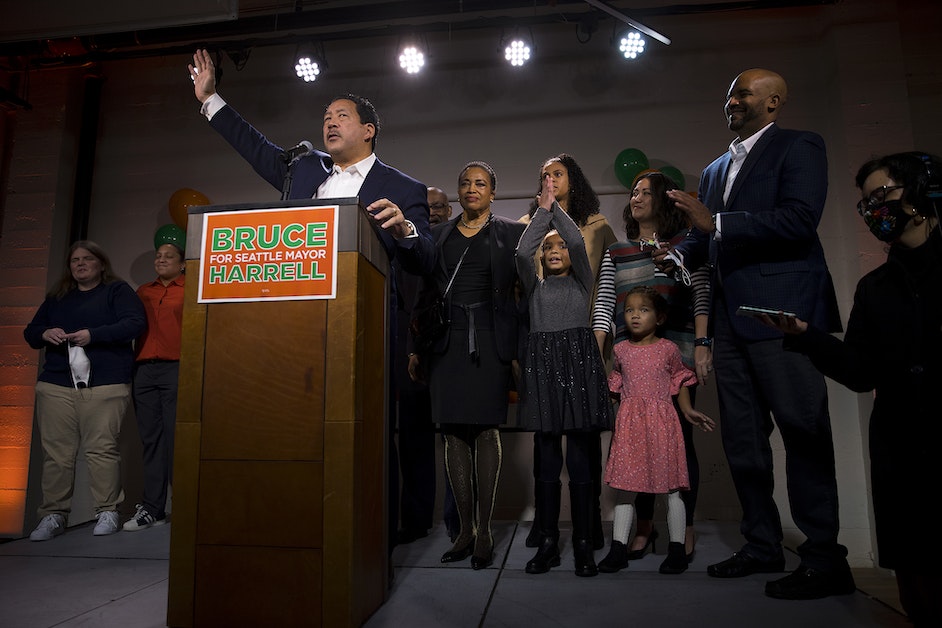 Thursday night, two days after initial results came in for the November 2 election, the gap between Lorena González and Bruce Harrell for Seattle mayor remained considerably wide, prompting González to concede from the race.

She called Harrell to congratulate him.

1/ With today’s ballot drop, it’s clear that Bruce Harrell will be the next Mayor of Seattle. Earlier, I called him to congratulate him on a hard-fought race and wished him much luck in his efforts to make progress on the challenges Seattle faces.

Harrell campaigned on moving the city towards the center. He says as mayor he’ll work to unite Seattle, convening forums with leaders with different perspectives to shape policy and move the city forward.

“You know the major issues of homelessness and public safety and police reform, race and social justice — these should be unifying discussions,” Harrell said this week.

RELATED: Why voters of a certain age may have veered Seattle toward the center

Harrell takes office at the beginning of January.

González thanked her supporters Thursday night, via Twitter, and urged them to continue organizing and working on the issues they spoke to during the campaign.

“This campaign is over but our work continues because the struggles people in Seattle face remain,” Gonzalez said. “Together, we shaped the conversation on our city’s most pressing issues, and Mayor-Elect Harrell made commitments in response to our pressure to not criminalize poverty, to expand progressive revenue sources, to demilitarize the police and invest in alternative responses to public safety calls, and to rapidly create appropriate shelter and not forcibly sweep the unhoused from public spaces.”

She added that they should work to “hold the next mayor and new City Council accountable to keep the Mayor-Elect’s campaign promises.”

Results didn’t budge much in other Seattle races.

As of Thursday night, Ann Davison maintained her lead over Nicole Thomas-Kennedy for Seattle city attorney — 55% to 44% respectively.

Teresa Mosqueda had 56% of the vote for Seattle City Council position 8. Her opponent Kenneth Wilson had 44%.

Sara Nelson had 57% of the vote for Seattle City Council position 9; Nikkita Oliver had 42.5%.

On Thursday night, The Seattle Times called the races for city council, reporting that Nelson and Mosqueda had won their respective seats.

The Seattle Times reports, and is calling, that Sarah Perry has unseated Kathy Lambert from her spot on the dais for Metropolitan King County Council. Perry took in 55% of the vote, more than Lambert’s 44.6%. Lambert has been on the county council for two decades.

In the month ahead of the election, Lambert publicly apologized for a campaign mailer that was chided for its racist overtones. She said she did not intend to harm anyone. Still, as a result, endorsements were rescinded and support was withdrawn from her campaign.

As of Thursday evening, neither Lambert or Perry had commented on the results.

There could be a potential upset amid the latest counts for the Port of Seattle, with challengers inching past incumbents. The races remain tight, but if the numbers hold, the port could usher in the commission’s first women of color.

With 50.93% of the vote, Hamdi Mohamed is now in the lead for position 3 over Stephanie Bowman with 48.62%. Mohamed took the lead by two percentage points in the third day of results.

Bowman is an established politician and candidate, with endorsements from former governors Chris Gregoire and Gary Lock. But Mohamed gained backing from the influential King County Democrats and MLK Labor Council. She’s been connected to the Port from a young age, with her mother working at SeaTac Airport.

Mohamed was born in Somalia. Along with Toshiko Grace Hasegawa, they could be the first women of color on the Port Commission. Both women trailed in initial returns, but inched past the incumbents as more votes were counted.

Hasegawa remains in the lead to unseat commissioner Peter Steinbrueck, a longtime Seattle politician. As of Thursday night, Hasegawa had 51.38% of the vote. Steinbrueck had 48.11%.

We are up by 13,600 votes — that’s 51.3% We’ve run an amazing campaign rooted in values, driven by vision, & powered by ppl w a shared passion for the potential future of our Port. THANK YOU I’m ready for what’s next. Let’s get to work! #HasegawaForPort pic.twitter.com/arKmmmXb6N

Both have long family ties in Seattle. Steinbrueck’s father has a park named after him, and Hasegawa’s own father is a longtime state senator.

Hasegawa and Mohamed both ran campaigns slightly to the left of their opponents, both focusing on the Port’s emissions.