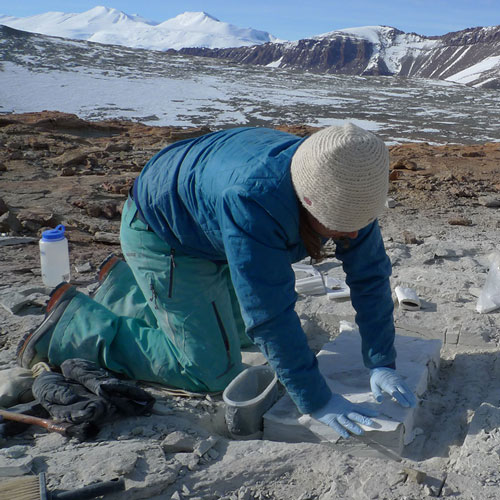 Not much is known about Antarctic amphibians, but Christian believes that will change after this expedition. “In the past, we’ve known which families of amphibians have been there but not which species,” he said. “Because we have so many [amphibian fossils] and they’re so well-preserved, we’ll be able to tackle that question and know what species of amphibians were in Antarctica after the mass extinction.”

In all, the Burke Museum team found 56 new localities and more than 100 specimens, including two new localities, where vertebrate fossils had never been collected before.

The work is just getting started back at the museum now that the fossils arrived.

“Antarctica provides our only window into what happened to life at high latitudes after the Permo-Triassic mass extinction, and so I’m excited to be back at the Burke and get the lab work started,” said Sidor.

Read more about the team’s findings in The Antarctic Sun article “Paleo Gondwanaland Was Full of Lystrosaurs.”