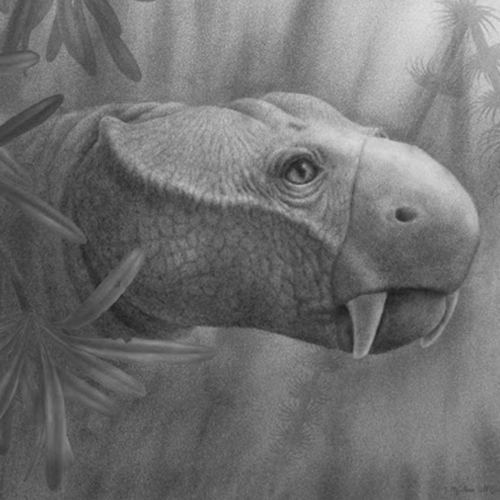 Whitney says she was surprised by the finding. “I kind of expected there to be one point in the family tree where all the dicynodonts started having tusks, so I thought it was pretty shocking that we actually see tusks evolve convergently,” she says.

“Dicynodont tusks can tell us a lot about mammalian tusk evolution in general,” says Angielczyk. “For instance, this study shows that reduced rates of tooth replacement and a flexible ligament attaching the tooth to the jaw are needed for true tusks to evolve. It all ladders up to giving us a better understanding of the tusks we see in mammals today.”

“Dicynodonts were the most abundant and diverse vertebrates on land just before dinosaur times, and they’re famous for their ‘tusks.’ The fact that in reality only a few have true tusks, and the rest have big teeth, is a beautiful example of evolution we can document. We can see how to build a tusk!” says Dr. Brandon Peecook, who is also a former Burke Museum/UW graduate student and is now a curator at the Idaho Museum of Natural History and one of the paper’s authors.

The researchers say that the study, which shows the earliest known instance of true tusks, could help scientists better understand how evolution works.

“Tusks have evolved a number of times, which makes you wonder how—and why? We now have good data on the anatomical changes that needed to happen for dicynodonts to evolve tusks.  For other groups, like warthogs or walruses, the jury is still out,” says Dr. Christian Sidor, a curator at the University of Washington Burke Museum and one of the paper’s authors.

Most of the dicynodont fossils analyzed in the study were collected during fieldwork in Tanzania and Zambia. These specimens, which are currently stored at the Burke Museum and other U.S. museums, will be repatriated at the end of the project and become part of the permanent collections at the National Museum of Tanzania in Dar es Salaam, Tanzania, and the Livingstone Museum in Livingstone, Zambia. This partnership allows for researchers across the globe to study the fossils, and ultimately bring the specimens back to their home nations for further research.

Dicynodonts were a very diverse group, and future studies could examine other dicynodont species and how their tusks (or non-tusks) developed. Sidor’s lab at UW is one of a handful across the country where the fossilized bones and teeth are routinely analyzed at the microscopic scale.

“Fossil bones, by themselves, don’t tell you very much.” says Sidor. “Maybe you can say something about its size or where the animal died, but the external surface of a bone doesn’t give you many clues about how the animal lived or its physiology. Thin-sectioning can also provide a lot of useful information because bones and teeth can  capture a record of an animal’s life in their tissues. On a tusk that’s ever-growing, the dentine records a daily measure of how fast the animal was growing. Did it grow faster or slower over certain seasons? Stop growing for a certain period of time? Creating thin sections of bones and teeth opens up a lot of other interesting things about the animal almost like analyzing tree rings. These are the types of questions we can continue to research.”

“Despite being extremely weird animals, there are some things about dicynodonts, like the evolution of tusks, that inform us about the mammals around us today,” says Angielczyk. “Plus, anytime you can say mammals aren’t that special, dicynodonts did it first, that’s a good day.”