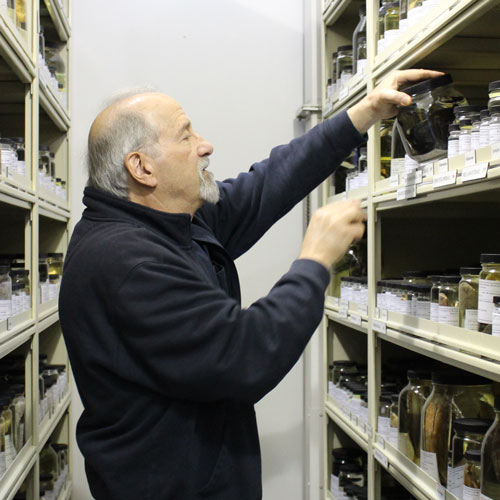 Now, more than 40 years later, Ted retains that same enthusiasm and excitement for these grumpy-looking creatures.

He escorts me into the Burke’s fish collection so that I could see some of the various anglerfish specimens for myself. As the lights of the fish collection slowly flicker on, Ted continues to share his knowledge of anglerfishes, all with a wondrous smile on his face. He begins to move quickly through the dimly lit room, looking through several shelves before finding a female anglerfish specimen in a clear jar and holding it up to eye level to inspect. The specimens are preserved in ethanol and lose their color, so it looks quite strange to me.

Ted reaches into a tank and pulls out a larger specimen, pointing out the most distinguishable feature, its highly tactile, species-specific bioluminescent lure. The female anglerfish has the ability to jut out and wiggle its lure to entice other deep-sea creatures before making them into a tasty meal.

“Can you just imagine what a nice, attractive thing that might be if you’re another little fish?” Ted chuckles.

Dinner isn’t the only thing trying to take a bite of the female anglerfish. Their tiny male counterparts rely on females to survive. “Tiny little dwarf males have a really short life existence. All the evidence that we have indicates that they probably live only a few weeks—maybe a month—and then they die if they don’t find a female because they really don’t have the apparatus to eat.” Ted said.

Once a male encounters a female, it bites onto her anywhere it can—be it her head, face, fins or lips—and permanently fuses to her in a connection that allows a “hormonal communication between male and female that stimulates the development of gonads,” according to Ted. Over time, the male loses his fins and organs until only testes remain; this is called sexual parasitism. While it may seem like the female is getting a raw deal, the relationship is actually mutually beneficial. She supplies dinner and a bloodstream, and he supplies her with sperm for reproduction whenever she wants. Oh, young deep-sea love!

As Ted prepares for retirement later this summer, he has high hopes for what researchers will learn about anglerfishes in the future. One recent milestone was the first video of anglerfishes swimming in the wild. Scientists at the Monterey Bay Aquarium Research Institute recently found and filmed an anglerfish in motion after 20 years of underwater research using submersibles.