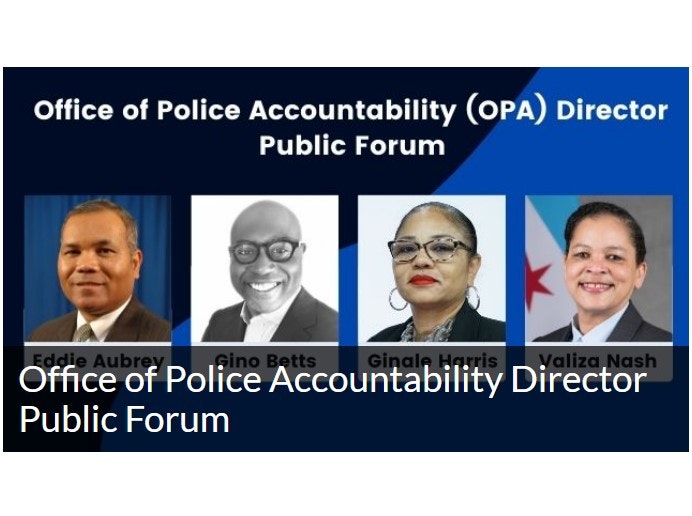 Seattle is hiring a new director for its Office of Police Accountability, which investigates complaints of police misconduct. The four finalists for that position answered questions in a Seattle Channel event Wednesday, and will meet with Mayor Bruce Harrell on Friday.

Protests against police violence in 2020 fueled a successful effort to create a new state Office of Independent Investigations where civilians will ultimately investigate incidents of police deadly force. The state’s Criminal Justice Training Commission will soon investigate complaints that could result in police officers being decertified. Meanwhile, Seattle is considering a key hire in the civilian oversight structure of its police department.

Seattle is considering two finalists from California, and two from Chicago. They are seeking the position that was held by Andrew Myerberg. He’s now director of public safety in Mayor Harrell’s office.

At the June 8 forum, two candidates said they’d like to see more civilians on the Office of Police Accountability staff, where most complaint investigators are currently sworn officers. Candidates also raised concerns about how police unions have used their labor contracts to block or restrict accountability measures. And they discussed the role of the OPA in rebuilding community trust in law enforcement.

One of the finalists who called for more civilian investigators in OPA is Gino Betts, an assistant state attorney at the Community Justice Center within the Cook County State’s Attorney’s Office in Chicago. Betts said his current job includes prosecuting violent offenses but also “working within BIPOC communities, educating them about public safety, the criminal justice system.”

Betts, who was formerly with the city’s Civilian Office of Police Accountability, said he’s not aware of data that police investigators compromise the integrity of misconduct investigations, but he said when police investigate one another, “the optics aren’t great from a community perspective shaped by decades of police abuse and distrust.”

Currently in Seattle, Betts said, seven of the OPA’s nine investigators are sworn officers “and then the other two can be civilians, but those civilians can’t work on any cases that could lead to the termination of an officer, so it’s really a conversation that needs to be had.”

The number and role of civilian investigators is delineated in the city’s labor agreement with police officers. Betts said he’s concerned that police unions have used collective bargaining to block hiring civilians and other accountability measures.

“We have a pretty strong and robust accountability ordinance here in Seattle, but it’s undermined by terms in the CBA [collective bargaining agreement] that – you know, police accountability should not be negotiated in a labor negotiation agreement.” He said police unions across the country have used labor agreements as a “shield” to block accountability measures.

Eddie Aubrey has run the Office of Professional Accountability in Richmond, California, in 2016, but he has connections to King County. Aubrey worked as a police officer in California, then went to law school and joined the King County Prosecuting Attorney’s Office, and later served as a judge, according to The Mercury News.

Aubrey said he’d like the Office of Professional Accountability to transition to having all-civilian investigators because police sergeants rotate into the office every two years, and must be trained. Having all civilians would provide more continuity and remove the training burden, he said.

“And the last benefit is those police sergeants that are currently there can be reassigned to patrol duties actually working the streets where the police department has a difficult time in retention of officers right now,” he said.

Aubrey said he’s committed to building community trust and was able to make strides on that as a police auditor in his previous job in Fresno, despite having minimal staff and only the ability to make recommendations.

Ginale Harris served as a police commissioner, which is a voluntary role, in Oakland, California, for three years. She described her motto as “truth over peace” and said she oversaw policy updates and acted as an advocate for impacted families.

She said the role of Seattle’s OPA director “is to make sure investigations get investigated thoroughly and in a timely fashion and make sure justice is swift.” But Harris said she’s concerned that the OPA director’s current powers to investigate and make recommendations on discipline are not sufficient.

“So where I come from, which is Oakland, our police commission actually has teeth, Harris said. “And we oversee the department policies, procedures and we have authority to fire the chief of police.”

In court filings, Kirkpatrick said in one instance Harris tried to show her badge as a commissioner to get out of paying a tow truck fee. Court documents say Harris denied that allegation and ultimately paid the full amount.

“In my opinion and mine alone I’d say, yes,” Harris said. “The way the legislation reads, the police chief can take the recommendations of the OPA director or not, ignore it and does not have to give explanation and I find that unacceptable.”

(The city’s bargaining agreement with the Seattle Police Officers Guild does require some explanation when a police chief goes against an OPA director’s recommendation to sustain a misconduct complaint. In those cases, the chief is required to submit his or her reasons in writing to the OPA director. It says a summary of that decision will be provided to the mayor and the city council.)

Valiza Nash is a former police chief, and now a supervising investigator within Chicago’s Civilian Office of Police Accountability. She said her focus has been on rooting out the small percentage of officers who “don’t’ need to be in law enforcement.”

“There are great officers out there that are doing the job,” Nash said. “But there’s a small percentage of officers that don’t need to be in law enforcement and that’s what I’ve been working so hard to do as a sworn officer and as a civilian supervising investigator, is to ensure legitimacy back into law enforcement and ensure civilians are protected from those officers that want to abuse that authority.”

Nash also said she has expertise in crisis intervention training. She recalled, as a police officer, handling a call from a man who she believed wanted to commit “suicide by cop” on the anniversary of his own son’s murder. Nash said after a standoff she asked the man to tell her about his son.

“His whole demeanor changed,” Nash said. He ultimately agreed to go to the hospital.

She said one indicator of success for her would be, “gaining trust of citizens and law enforcement for fair and transparent investigations.”

Mayor Harrell will announce his choice for the position in early July. That person would then go to the city council for confirmation, and be appointed to a four-year term.