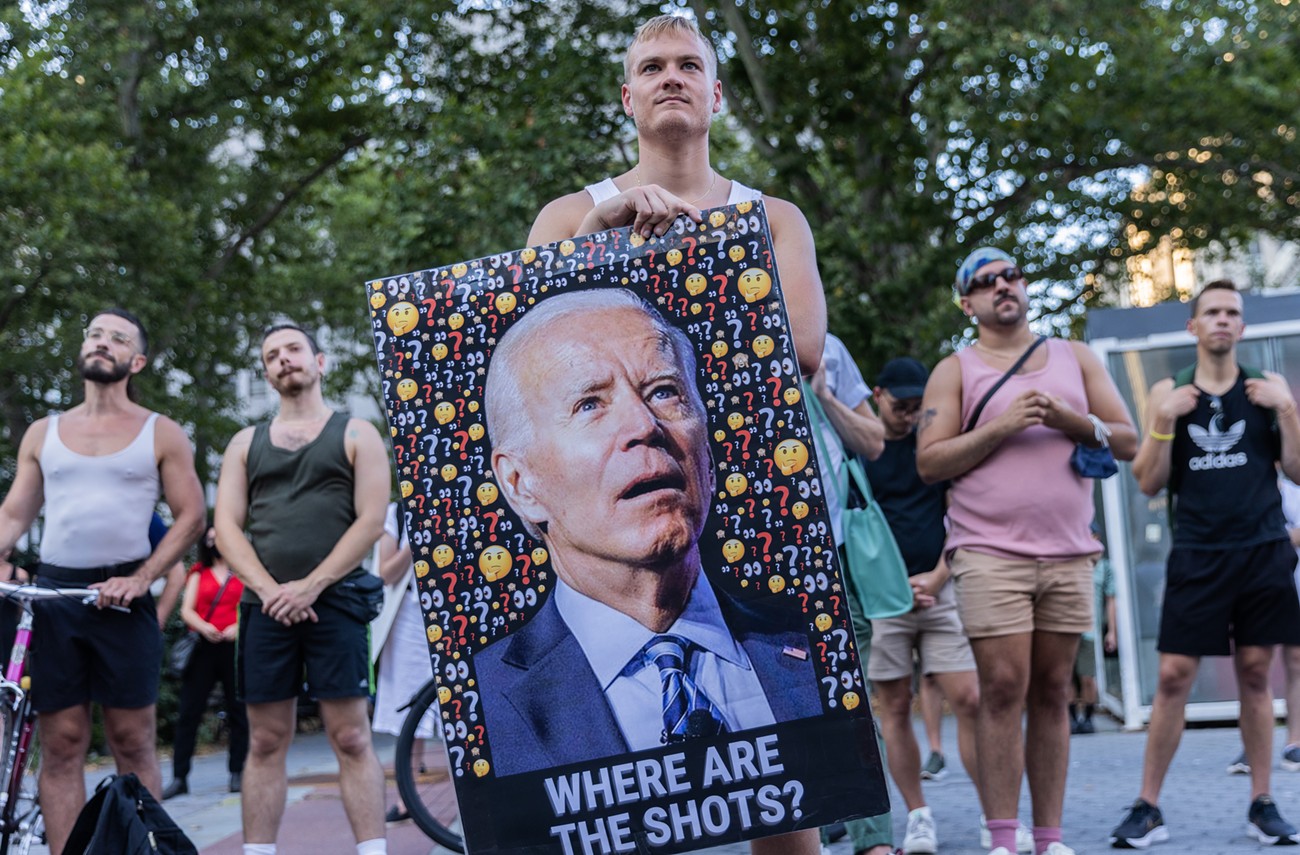 Like an insistent, annoying customer trying to cut in line at the coffee shop, here comes monkeypox to butt into our lives.

We were full-up on viruses before this new one came along, thank you very much, but now we have multiple life-threatening diseases chasing us around. Complicating matters is the fact that monkeypox is very different from COVID, from the method of transmission to the symptoms to the vaccine. Also setting it apart: The ~discourse~ around the groups most likely to be affected, and some troubling signs of this disease being used to drive stigma towards queer people.

So let’s dispel some misinformation, make sure you’re as protected as you can be, and take a look at how bad this could possibly get.

Okay, prepare yourself, because this is going to be unpleasant. Monkeypox manifests as an extremely unpleasant rash that will completely wreck you for between two and four weeks, and it could (but it probably won’t) kill you. It’s caused by a virus, and symptoms are primarily flu-like misery and painful sores.

When we say “sores,” we’re not talking, like, a little blister–these can be deep, wet, painful pustules all over your body, the sort of thing you would want to run from in a zombie movie. They can pop up everywhere, including on your hands, on your genitals, on your asshole, and in your mouth. They will ooze and hurt. You won’t be able to stop thinking about them. After they’re gone, they can leave scars.

As with many other infections, monkeypox can be accompanied by secondary illnesses, from pneumonia to kidney injury to sepsis to blindness if you get a lesion in your eye. (Told you this was unpleasant.) In pregnant people, infection can cause stillbirth or birth defects. The vast majority of patients recover, but the infection will kill a small number of people.

What Precautions Should I Take?

Monkeypox cases are currently rising in King County. Documented cases are still low compared to other cities — under a hundred — but the numbers are ticking up. Fortunately, there are several things you can do to reduce your risk.

The most common (but not the only) way that monkeypox is spreading in the US is through direct skin-to-skin contact with the rash. You can reduce the risk of transmission by avoiding large gatherings where people have exposed skin and are likely to press up against each other–like at music festivals, nightclubs, bathhouses, or sexual encounters. You can also reduce your risk by washing your hands frequently.

The virus can also be transmitted via fabrics and surfaces. If you are interacting with a person who has been infected, you can reduce your risk by wiping down surfaces, cleaning linens and clothes, and wearing protective gear such as gloves and a mask. I personally am going a step further and avoiding the gym for a while, but that’s not based on a public health recommendation–just my own choice to be extra cautious. Also, I hate going to the gym.

There’s some debate over whether the virus can be airborne, but we do know that it can spread in respiratory droplets at close range. Avoid close unprotected conversation with people who are infected.

Hospitals are using full Personal Protective Equipment when dealing with monkeypox patients: Gowns, gloves, goggles, N95s. You don’t need to get all dolled up like that if you’re just taking a trip to the grocery store, but if you’re in contact with someone who has monkeypox, then PPE will reduce your risk.

There are also a few less-common methods of transmission, such as through contact with an infected animal (the cause of a 2003 outbreak in the midwest), or from a pregnant person to their fetus. Try to avoid getting attacked by prairie dogs, especially if you are a fetus.

What if I Think I Have Monkeypox?

If you develop a new, unexplained rash, contact your doctor right away. Don’t wait.

If you don’t have a regular doctor, contact Public Health at 1-800-756-5437. You can also visit Seattle & King County Sexual Health Clinic at Harborview, which is open Mondays, Wednesday. Thursdays, and Fridays from  7:30 am to 6:00 pm, and Tuesdays from 9:30 am to 6:00 pm. At your appointment, make sure your medical provider is aware that monkeypox cases are on the rise in King County.

If you believe you might be infected, avoid sexual encounters and gatherings where you will be in close contact with other people. Self-isolation is extremely important.

Should I Get Vaccinated?

For now, because vaccines are in short supply, it depends on your level of risk.

Anyone can get monkeypox. But certain groups are more at risk right now–primarily (but not exclusively) men who have sex with men. Yes, that’s unpleasant and potentially stigmatizing. I’ll talk a little more about that below.

In King County, the vaccine supply is extremely limited–just 710 courses for the entire county (we received 1,420 doses, but people need two doses to be vaccinated)–and those are currently being prioritized for people who have had direct exposure to an infected patient. If you’ve been in contact with someone who is infected, you should talk to your doctor immediately. If you don’t have a doctor, contact King County Public Health at 1-800-756-5437.

The vaccine works best if you get it two to four weeks before infection, but it can reduce severity if administered up to four days post-exposure. If you think you’ve been exposed, don’t wait. Call a doctor NOW.

How Do I Get Vaccinated?

Some U.S. cities have set up vaccination clinics, but Seattle isn’t among them because we don’t have enough vaccines to go around. We got fewer doses than other counties because case numbers here are climbing but they’re still lower than they are in New York and Los Angeles.

King County is expecting to get more vaccines sometime later this summer or in the fall. They don’t have a specific date yet.

If you don’t want to wait, you may be able to get a vaccine by traveling to a more advanced country, such as Canada, France, or the Netherlands.

Vancouver, B.C. is currently providing vaccines to a broader range of people–primarily men who have sex with men. Check your eligibility here, but note that appointments are limited.

You should also be aware that it can take several weeks for the vaccine to be fully effective. You can’t just get an injection and then slather yourself in pus that night.

If you do get vaccinated, be prepared to share your medical history and to schedule a follow-up visit. There are two different vaccines that you might get: One requires two doses, two weeks apart, and it’s very safe for most people. The other requires just one dose, but it’s not safe for people with certain other conditions, including HIV.

Why Is It so Hard to Get a Vaccine?

The short answer is that we live in a bad country.

The United States has over a million doses sitting in warehouses in Denmark, where the vaccine is made, but they’ve only been sending us a little at a time.

One reason: American storage facilities aren’t as advanced, so even if we got a bunch of doses they would expire quickly. Another reason: It’s the same vaccine used for smallpox, and officials don’t want to use up the entire stockpile in case there’s a smallpox outbreak. A third reason: One of the storage facilities is new, and it hasn’t been inspected yet.

That’s left Americans waiting for weeks while the virus spreads. A spokesperson for the federal agency in charge of the vaccine rollout, BARDA, said that the delay wasn’t too bad if you only count “business days.” I am not making that up.

To be fair, most other countries haven’t made vaccines widely available either. In Europe, only France and the Netherlands had strategic reserves. But America’s foot-dragging is uniquely bad.

Of course, there’s lots of misinformation circulating about the virus–as a general rule, don’t get your medical advice from social media, where everyone is an idiot.

Contrary to rumors, there’s no evidence that monkeypox was released from a lab. It appears to be the same strain that has commonly circulated in West Africa. There’s no reason to believe it was engineered or deliberately spread.

There’s also no evidence that this has anything to do with COVID–either the virus or the vaccine. The COVID vaccine doesn’t make you more susceptible to monkeypox infection. Vaccines do not weaken your immune system.

Is This a Gay Thing?

Yes and no. The virus doesn’t care who you have sex with, and it can infect anyone. But one of the primary modes of transmission–skin-to-skin contact–just happens to be an activity that is part of life for many men who have sex with men (MSM).

Epidemiologists suspect that this may be due to queer men tending to have stronger sexual networks versus the comparatively weak sexual socialization of heterosexuals. It’s possible that the numbers being reported are somewhat unbalanced, because queer guys can have better relationships with doctors. However, experts say that bias isn’t enough to completely skew the data.

So if MSM are the primary way the virus is spreading, shouldn’t gays just stop having sex for a while? Well, that would be one way to reduce risk, and if you personally choose to do that, then you can feel confident that you are prioritizing your safety and the safety of people with whom you are intimate.

But what we’ve learned over the last few decades is that ordering broad groups of people to stop having sex is not effective. The only thing it achieves is providing a temporary sense of smug satisfaction to those issuing the order. (And if you think that engaging in risky behavior is exclusively a gay thing, look at how compliant people were about wearing masks to stop COVID.) What works is a multi-faceted approach: Educating patients about relative risk, using protective equipment, providing testing and counseling, and providing free universal health care. But, as noted above, we live in a bad country, and those interventions are not always available.

In the last week or so, there’s been a lot of extremely-online ~discourse~ about whether it’s homophobic to say that MSM are more at-risk and to prioritize vaccines for them. I don’t think that’s homophobic–I think it would be more homophobic for officials to de-prioritize treatment for the group most in need of help.

But—and it’s a big but—this is exactly the kind of excuse that The Worst People In The World have been looking for in order to stigmatize the queers. I don’t even like typing the name “Marjorie Taylor Greene,” much less reading her tweets, but you can just feel the glee oozing out of the screen when she insinuates that monkeypox is some sort of proof that gays are, as conservatives like to claim, diseased child-molesters.

“If Monkeypox is a sexually transmitted disease, why are kids getting it?” MTG wrote the other day. The answer is that the virus can be transmitted in lots of ways besides sex, but since when have Republicans let facts get in the way of a good smear? This situation is red meat for bigots.

So, should we avoid pointing out that the virus is mostly spreading among men who have sex with men? Should we just make the vaccine available to anyone who wants it?

Personally, I don’t think that makes any sense. Bigots are going to make shit up to justify their bigotry no matter what, and it would be far worse to spread misinformation and to allow the virus to spread by allocating resources to people who don’t need it.

Or, put another way: If you find yourself writhing in agony in a hospital because you’ve got a scabby sore that’s weeping pus out of your anus, you will probably not feel particularly comforted by the thought, “Well, I couldn’t get a vaccine, but at least Marjorie Taylor Greene doesn’t think any less of me than she already did.”