All four City of Seattle races have been decided: three definitively, and one all but assuredly. Let’s start by reviewing the basics: at this point 268,873 ballots have been received (54.9% of registered voters), 249,961 of them have been counted, and 18,912 are in-hand and remain to be counted. Assuming there will continue to be a small trickle of ballots delayed in the mail and the total participation will reach 55%, there are probably about 19,500 ballots left to count before we have the final tallies.

The immediate impact of this is that at this point if a candidate leads by more than 19,500 votes, they are assured of victory: there simply aren’t enough uncounted ballots left for their opponent to catch up. This is the case for three of the races: Mayor, and the two City Council positions. 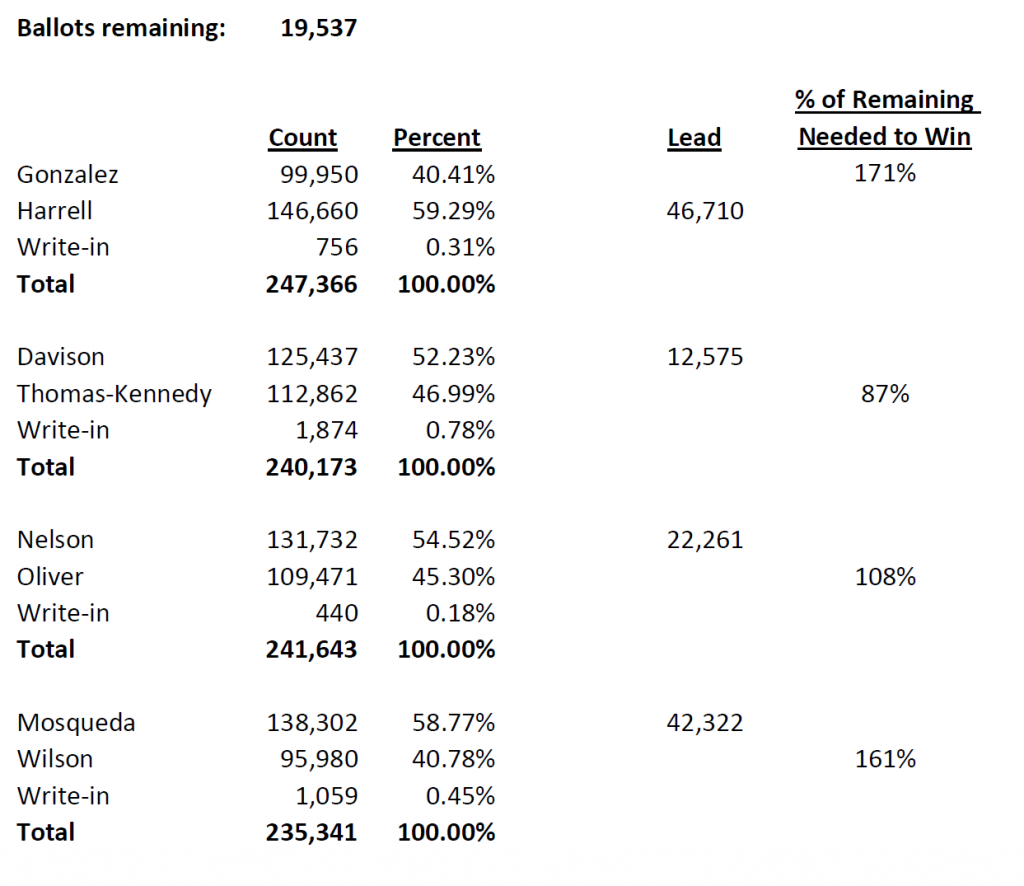 The one race where the trailing candidate isn’t yet mathematically eliminated is the City Attorney race, where Ann Davison leads Nicole Thomas-Kennedy by 12,575 votes, 52.23% to 46.99%. However, Thomas-Kennedy would need 87% of the remaining uncounted votes to claim victory. Could that happen?

We know from past Seattle elections that the pre-election-day voting is dominated by older, more moderate voters, and the day-of-election ballots are dominated by younger, more progressive voters.  According to King County Elections, there were 144,134 ballots cast before Election Day; those are the ones that show up in the election results Tuesday night and Wednesday afternoon, while elections department staff are working to verify the remaining ballots so that they can be counted Thursday and beyond. By Wednesday afternoon, King County Elections had counted 153,662 ballots: essentially all of the pre-election day ballots plus a small number of the election-day ones. Nearly everything in Thursday’s and Friday’s results were election-day ballots (with the exception of “challenged” ballots that took a few extra days to verify).

We expect that Monday we will see the tally of most of the remaining uncounted ballots; again, Thomas-Kennedy needs 87% of them in order to win. While it theoretically could happen that the remaining ballots skew that far in her favor, the probability is so astronomically low, given Thursday’s and Friday’s batches where the best she did was 58.72%, that if it did happen it should trigger an immediate audit of the election. A 500-vote sample, if it all came from a dropbox in a very progressive neighborhood, might have a skew that high, but not a 19,500-vote sample — over 7% of the total ballots. To win, Thomas-Kennedy needs 12,576 votes, plus one for every vote that Davison gets in the final batch; even if Davison doesn’t get a single additional vote, Thomas-Kennedy still needs over 64% of the remaining ballots — a figure she did not reach in any daily batch last week.

Monday’s results will almost certainly tip in Thomas-Kennedy’s favor and further tighten the race, but not enough to flip the result. It’s worth noting that Thomas-Kennedy has three competitors in her race: Davison, write-ins, and people who choose not to vote in that race. There are currently 1,874 ballots with write-ins for City Attorney, the highest of the four city races, and 9,788 ballots with no vote for City Attorney.

While Teresa Mosqueda is cruising to a comfortable win over relative unknown Ken Wilson in her re-election bid to the City Council, there are two observations on the race that are worth mentioning beyond the obvious one that Wilson far outperformed expectations.  First, the Mosqueda/Wilson race has by far the largest number of “no vote” ballots so far: 14,620, or 5.8% of the ballots. Add in the 1,059 write-ins, and 6.3% of voters decided that they liked neither Mosqueda nor Wilson — even more than the 4.7% who didn’t pick either candidate in the City Attorney race.

Perhaps a more serious concern is that Mosqueda’s total vote share, currently at 58.77%, looks to end up at almost exactly the same place as in the August primary (59.37%). Wilson, through what looked like a fairly minimal campaigning effort, seems to have consolidated the vote-shares from all of the other candidates eliminated in the primary. Mosqueda is the only candidate who did not pick up vote-share in the general election — though admittedly she started at a much higher level than the other candidates. Still, there were 25 percentage points on the table, and she didn’t get any of them.

It’s unclear why Nikkita Oliver and Ken Wilson have not conceded their races yet, given that they are both mathematically eliminated at this point. Nevertheless, we should expect concessions from both of them and from Thomas-Kennedy after King County Elections releases another results update Monday afternoon at 4pm and removes any remaining doubt about the outcome of the City Attorney race.