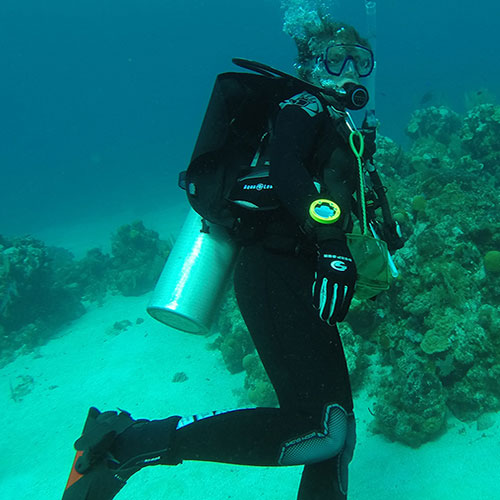 The main purpose of the trip was to set up a new base of operations in Roatan for the Smithsonian Deep Reef Observation Project (DROP) team. The team has been working in the southern Caribbean since 2011 using the submersible Curasub to explore the deep reefs below SCUBA diving range, using hydraulic collecting arms to collect specimens.

They have described dozens of new species from these dives, but also discovered that the animal life they were seeing at these depths was unique. They recently described a new zone of the reef community, called the “rariphotic zone,” which is a low-light zone from 130–300 meters (400–1,000 feet), below the reef-building coral zone.

Because the Curasub is limited to a depth of 300 meters (1,000 feet), they wondered just how deep the rariphotic zone goes and when it transitioned to the deep sea. Clearly they needed to get deeper! Enter the Idabel submersible—a privately owned, homemade submersible stationed in Roatan capable of descending to 600 meters (2,000 feet).

Luke worked with an engineer to install a suction-powered fish-catching system, similar to the Curasub, and collected a few specimens on a previous trip. The plan this time was to get down below 1,000 feet, see where the fauna starts to change, and collect as many specimens as possible. In addition, we’d record temperature data, which can be combined with similar data recorded from the Curasub to look for trends across the Caribbean.