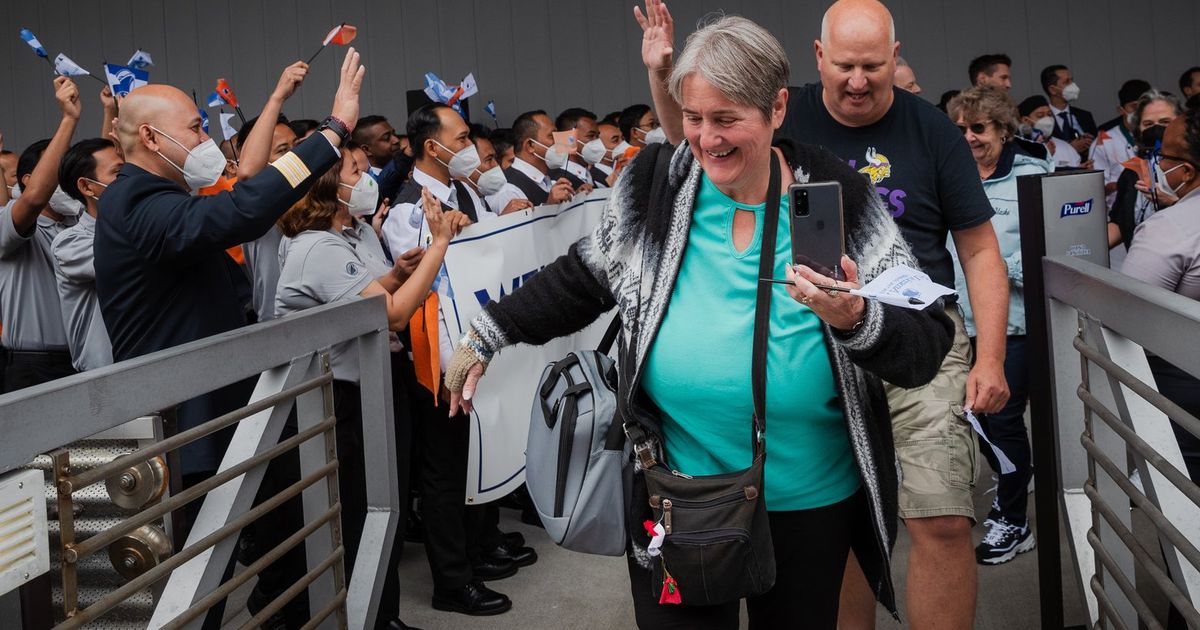 After being cooped up in her Bonney Lake home for much of the pandemic, Earlene Smith was ready to cruise again.

Hoping for some normalcy and fresh air, she joined her husband, sister and brother-in-law on a Royal Caribbean cruise to Alaska for eight days in May, round-trip from Seattle.

“The cruise staff were very welcoming,” Smith said. “It was good energy.”

The ship left on a Monday. By Thursday, her brother-in-law was feverish, achy and coughing. He’d caught COVID-19, and they still had about half the trip to go.

Even with precautions onboard, COVID infections like the one that Smith’s brother-in-law contracted are not a rare occurrence on cruises. As of Friday, 85 of 93 cruise ships in U.S. waters have reported at least one case of COVID onboard, according to the Centers for Disease Control and Prevention.

The cruise industry, however, is returning and more ships are sailing from Seattle. The Port of Seattle forecasts that about 265 vessels will sail in 2022, compared to 82 last year. The Port estimates the 2022 season, which ends in October, will have an economic impact of $900 million.

The comeback is ramping up despite warnings from the CDC. When the highly transmissible omicron variant drove up case counts in December, the CDC cautioned against cruise travel, regardless of a traveler’s vaccination status.

In May, CDC Director Dr. Rochelle Walensky said during a U.S. Senate hearing that COVID cases on cruises increased 30-fold in two weeks. That same month, passengers reported that a COVID outbreak overwhelmed a Carnival Cruise Line ship that docked in Seattle.

On Sunday, Holland America, a Seattle-headquartered subsidiary of Carnival, put its last Alaska-bound ship, the Westerdam, to sea, and its entire fleet is operating again. In total, Holland America has six ships sailing from Seattle and Vancouver, B.C., to Alaska. At maximum capacity, they carry more than 210,000 passengers at a time. Of that total, 75,000 passengers sail from Seattle alone, according to the company.

Holland America President Gus Antorcha said the cruise line’s health precautions align with federal, state and local safety guidelines. Cruises are a heavily regulated industry, he said, making them one of the safest ways to travel at the moment.

“I find it hard to believe any reasonable person would look at the procedures we have onboard and not feel quite safe,” Antorcha said.

Holland America said it requires all travelers to be fully vaccinated and recommends masking, especially indoors. Cruise ship crews leave notes on basic protocols and extra masks at guests’ cabins. About 6% of cabins are designated for quarantine isolation if a passenger tests positive for COVID.

Smith said her brother-in-law isolated in the couple’s room, where he remained for the rest of the trip. Smith also said her group could not bring him food. Cruise staff sent him meals instead.

All lines that visit the Port of Seattle participate in the CDC’s voluntary COVID-19 program for cruise ships, according to Public Health – Seattle & King County. The program includes guidelines on contact tracing, quarantining and vaccination requirements.

While Royal Caribbean participates in the CDC program, Smith said it appeared the staff was confused about testing protocols. Contact tracing was thorough, she said. But when her group was about to leave the ship in Seattle, the crew didn’t know if her sister, who had been closest with Smith’s brother-in-law before he tested positive for COVID, should test again before disembarking.

“They refused to test her,” Smith said.

Royal Caribbean said in a statement that it has had “historically high guest satisfaction scores” and that “the health and safety of our guests, crew members and communities we serve is our top priority.”

While CDC guidelines cover what may happen when the boat is sailing, they do not cover what happens when it docks. As part of the agency’s program, cruise lines are required to establish agreements with local health agencies.

The quarantine period for Smith’s brother-in-law wasn’t over when they arrived in Seattle. After waiting about three hours to disembark, he hopped on a van, with other people she suspected had COVID, to a hotel, Smith said.

For Adrian Johnson, who went on a seven-night cruise to Alaska on Royal Caribbean’s Alaska Glacier, the trip was good until the final night. The crew was friendly and always masked, and the health protocols were reassuring.

He traveled with his girlfriend, his girlfriend’s mother and sister-in-law and his two sisters. On the last night on the ship, Johnson started feeling feverish. He had a inkling it was COVID, but he decided to get tested when he got home in Ballard a few hours later.

His at-home test result was positive for COVID. Out of the six people in his group, five were infected with the coronavirus, Johnson said.

He said he’s not sure when he was infected. His group tried to distance themselves from other people as much as they could, though that was impossible at the casino and the theater, where only a few people wore masks, Johnson said.

A spokesperson for Royal Caribbean declined to comment about concerns raised by Smith or Johnson.

Smith said she didn’t know of other cases on her trip.

Cruise lines generally don’t tell passengers where there has been a COVID infection onboard. A Holland America representative said a federal health information privacy law prevents them from doing so.

Despite the COVID case in her group, Smith said this won’t stop her from going on more cruises going forward.

“This is our third Alaskan cruise and we’ve taken several in the Caribbean,” she said. “I was glad to get back to something that resembled normalcy a little bit.”

Johnson said he won’t be hopping on a cruise ship again while COVID is still around.

“We had such a good time,” Johnson said. “It’s disappointing.”