Wednesday morning the City Council transportation committee received an update from SDOT on the first year of its scooter-share pilot program. With the department’s relentless effort to tell a positive story, it should be no surprise that one of the four scooter vendors in the program is named “Spin.”

The twelve-month pilot period ran from October 2020 through September 2021. SDOT reports that in total 1,489,985 scooter trips were taken over that time. The monthly data shows that the program had low uptake during the winter and early spring, but started ramping up in April both the number of bikes deployed and the number of trips taken. 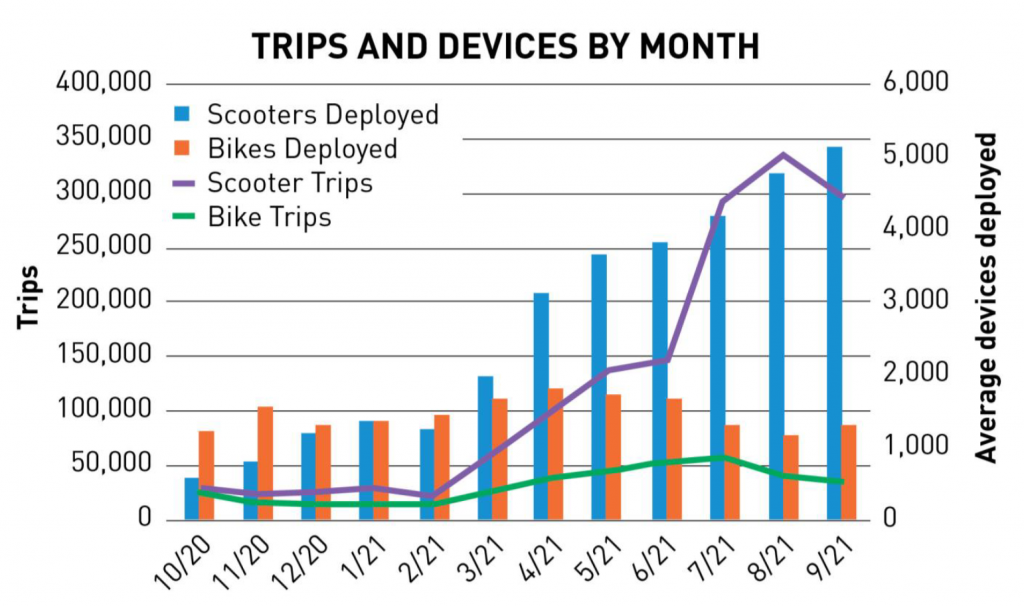 SDOT’s presentation cut off the data in September at the official end of the pilot program; while the program continues, the dashboard on SDOT’s scooter-share web site shows that usage dropped off dramatically starting in October as the weather turned colder and wetter — not at all surprising, but a reminder that in Seattle scooter-share will likely remain a seasonal business. 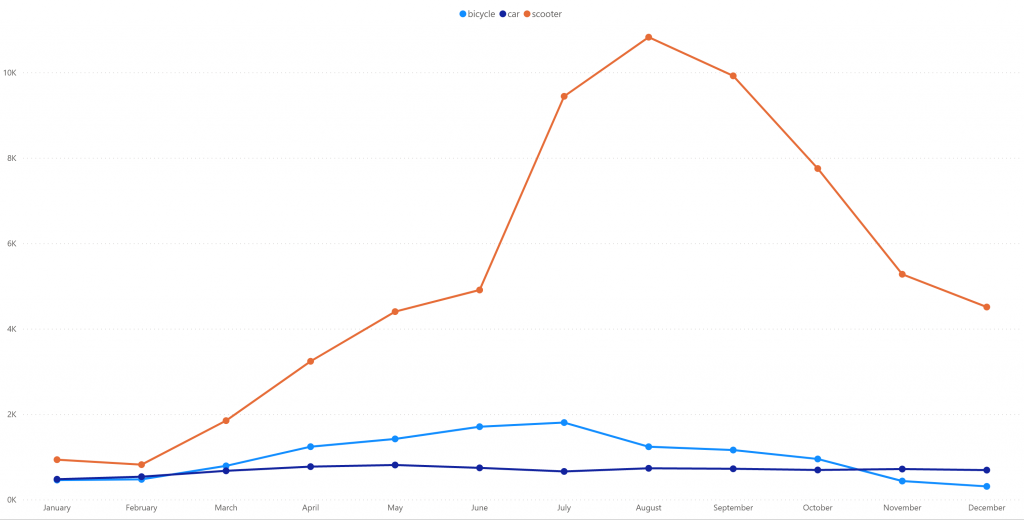 SDOT says that the average scooter trip was 1.4 miles, took 15 minutes, and cost $6.63. Those are eyebrow-raising numbers; that’s an average speed of only 5.6 miles per hour, and at a cost of $26.50 per hour — far slower and more expensive than one might imagine. Perhaps it’s no surprise, then, that the program averaged only about 3 trips per unique user. 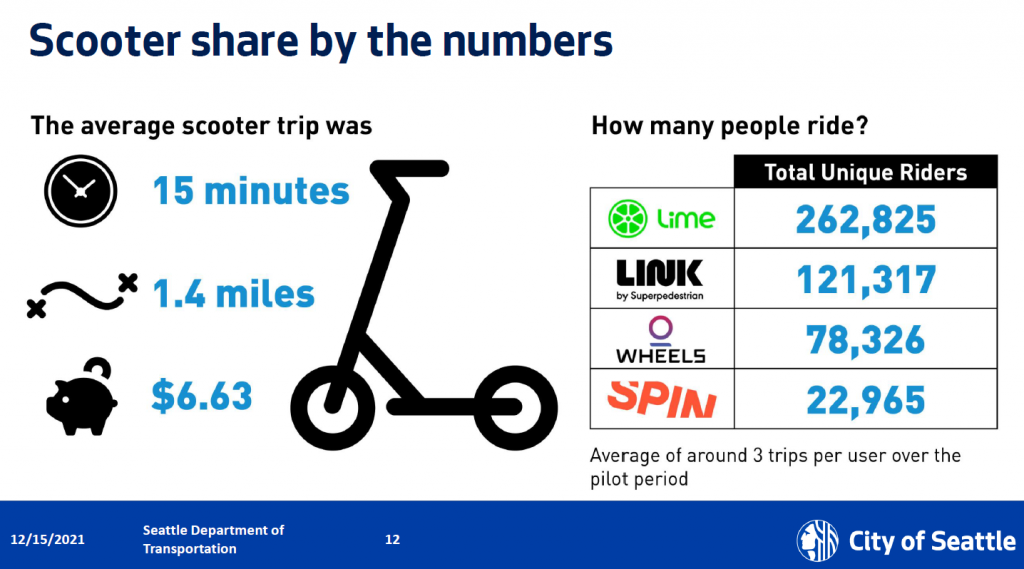 Of the four vendors signed up to provide scooters, Lime was by far the largest, with 262,825 users signed up; Link had 121,317, and Wheels and Spin had far smaller numbers. SDOT assumes that many riders signed up with more than one vendor.

In August 2020 when SDOT pitched the scooter-share pilot to the Council (it needed the Council to pass two ordinances in order to move it forward), it made a long list of promises, including:

Let’s look at how SDOT did in keeping these promises.

Riding on sidewalks. In a survey of 4,141 users of the scooter-share program, 22% of respondents said that they rode on the sidewalk for most of their most recent trip — despite it being prohibited, and despite the fact that the vendors were supposed to educate riders that it is illegal to do so except where the sidewalk is part of the bike trail (e.g. the Fremont Bridge). In Wednesday’s meeting, SDOT representatives’ response was, “we want to do more education.” Councilmembers Pedersen and Herbold were clearly not satisfied with that answer.

Bike parking/obstructions. SDOT’s target was for less than 3% of scooters to be parked in places where they create obstructions. None of the four vendors ever met that goal during the one-year pilot. In the final quarter there was substantial improvement according to SDOT’s data, but for half the time two of the four vendors (Lime and Link, the two biggest ones) had over 20% of their bikes parked in a manner that created an obstruction. In Wednesday’s meeting, SDOT representatives said that they had issued $20 fines for improperly parked bikes, which the vendors passed through to the riders. Despite having the authority to impose other punitive measures against the vendors for never meeting the target parking requirement, SDOT said that they have not done so. 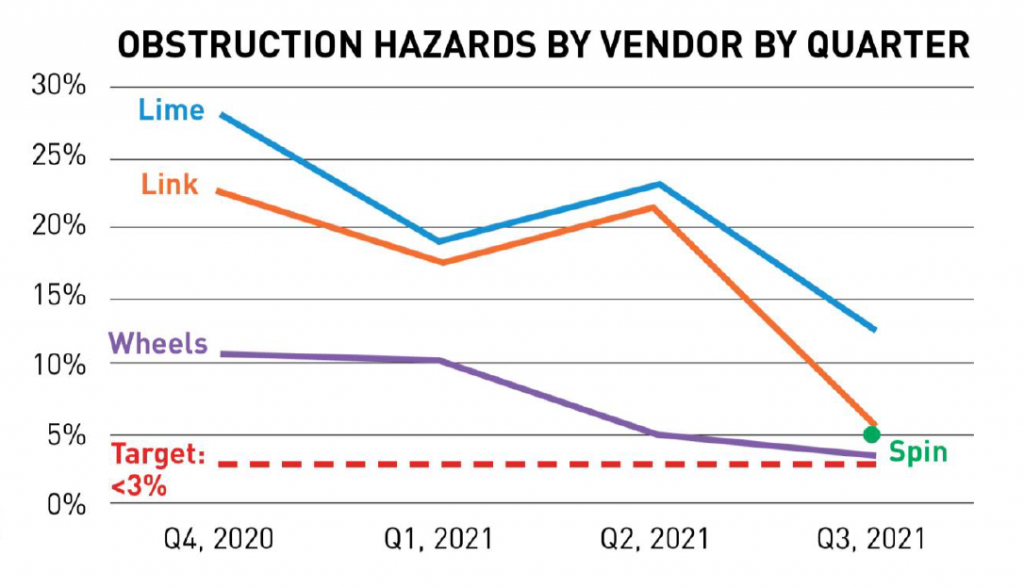 Speed caps.  By all reports, the caps on scooter speeds have been implemented by the vendors.

Helmets. According to SDOT’s survey, 70% of riders never or almost never wear a helmet. The most common reasons for not wearing a helmet were “I don’t have one” and “I didn’t want to carry it.”

Enhanced education and enforcement. Clearly neither is sufficient, given the high incidence of sidewalk riding and improperly-parked bikes and the low number of people wearing helmets. It’s unclear what meaningful enforcement SDOT is actually doing.

Scooters in good working order and available.  SDOT did not report to the Council on their audit results related to this.

UW/Harborview safety study. This study never happened. According to SDOT, UW and Harborview backed out because of insufficient capacity due to COVID constraints. SDOT did not recruit a replacement; instead they engaged one of their regular market-research vendors to do another post-pilot survey of scooter-share riders on safety issues.  The department expects the survey report to be available in January. This was a huge fail, leaving SDOT with almost no hard data on scooter safety from while the pilot program was underway. Later in this article, we’ll dive into what the scarce data available does say about scooter safety (spoiler: it’s very bad news).

COVID-19 precautions. SDOT did not report to the Council on this topic.

Equity considerations. SDOT heavily touted its work to get accessible scooters deployed. As far as the equitable distribution of scooters to the “environmental justice community” area, SDOT stayed high-level, saying that the 10% goal was exceeded: 15% of scooters were deployed to the designated areas.

However, the “heat maps” on SDOT’s scooter-share pilot site tell a more nuanced, and not nearly as rosy, story. Here’s the designated equity areas where at least 10% of the scooters were to be deployed: 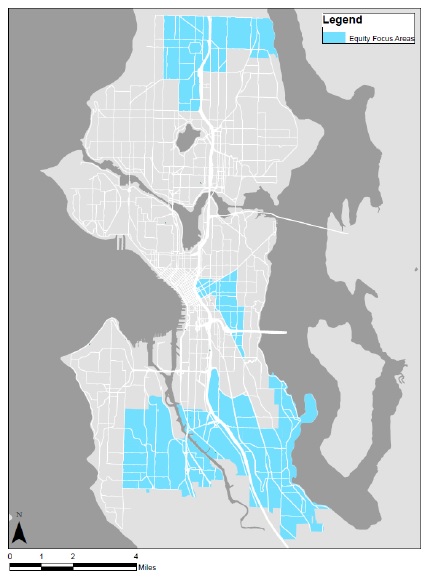 And here is SDOT’s “heat map” of where scooters were actually deployed in the equity areas: 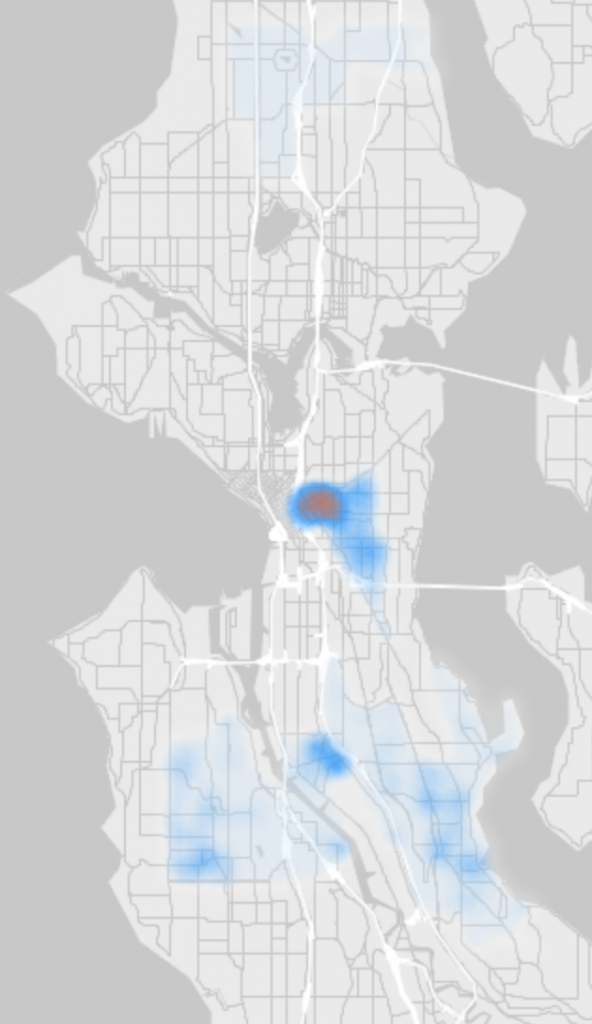 You can see very clearly that nearly all of the “equity” deployments were in Capitol Hill and First Hill, with a light sprinkling in a few South Seattle neighborhoods and almost nothing in North Seattle.  Looking at the full deployment map tells us why: because the program as a whole was heavily concentrated in the downtown core of the city. Claiming that the program reached its equity goal ignores the fact that the program offered little outside of the city center. The possibility of this outcome was an issue that Councilmembers raised with SDOT a year ago when they pitched the pilot program; they suggested at the time that SDOT might want to have sub-targets for specific neighborhoods to ensure geographic spread. 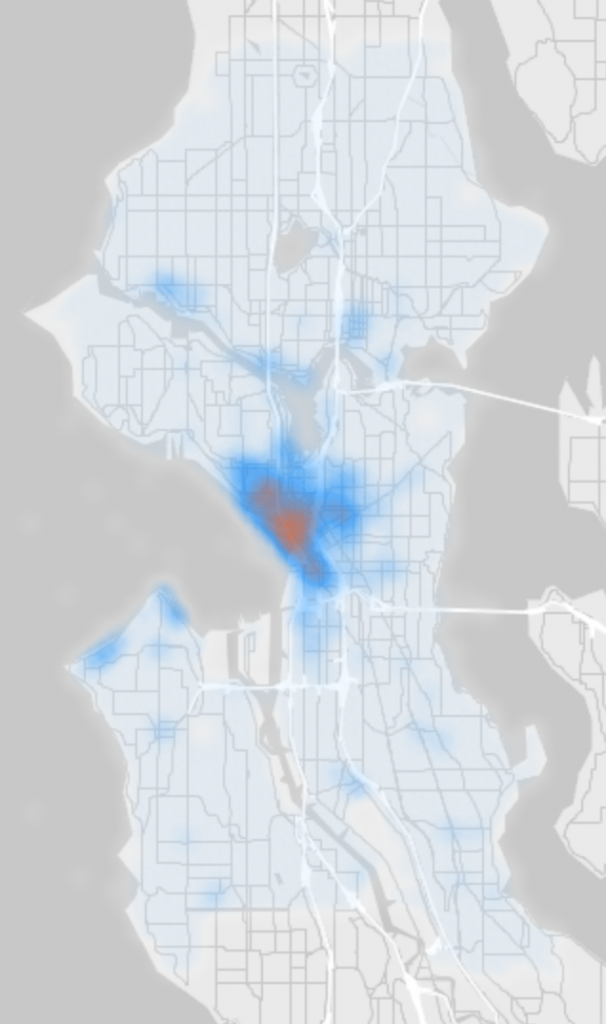 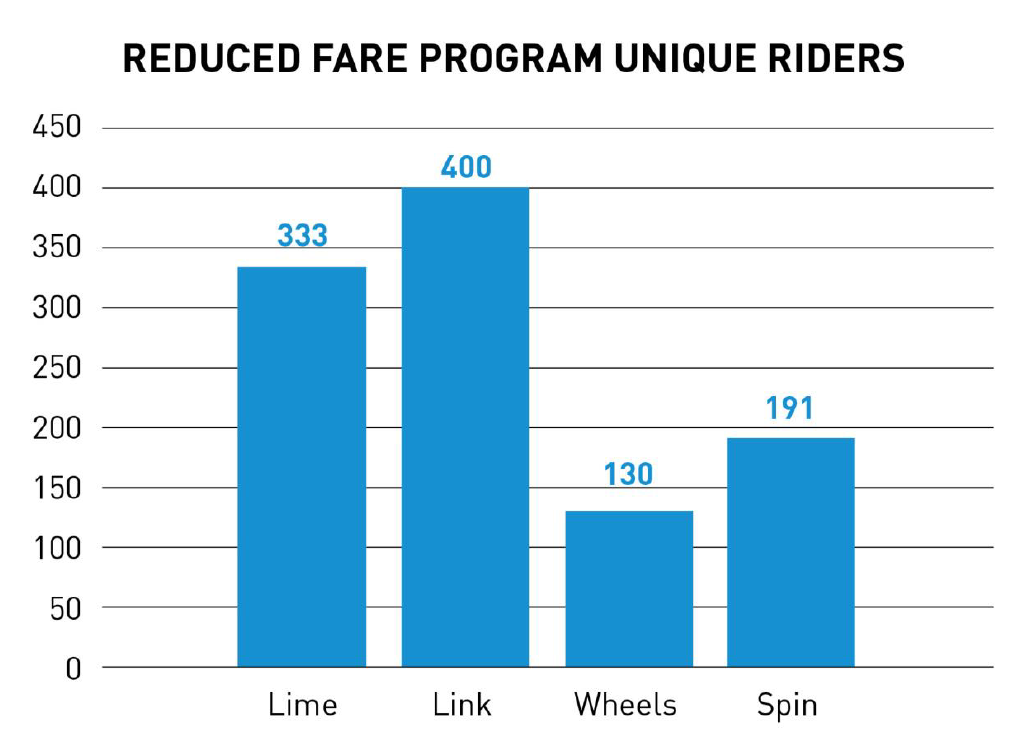 In SDOT’s survey, 14% of riders had household income of less than $25,000, and another 17% had incomes between $25,000 and $50,000; assuming those percentages are representative of the riders as a whole (and not just the survey respondents) together they represent 81,000 Lime riders, yet only 333 signed up. The figures for the other three vendors are similar. That is another huge failure. 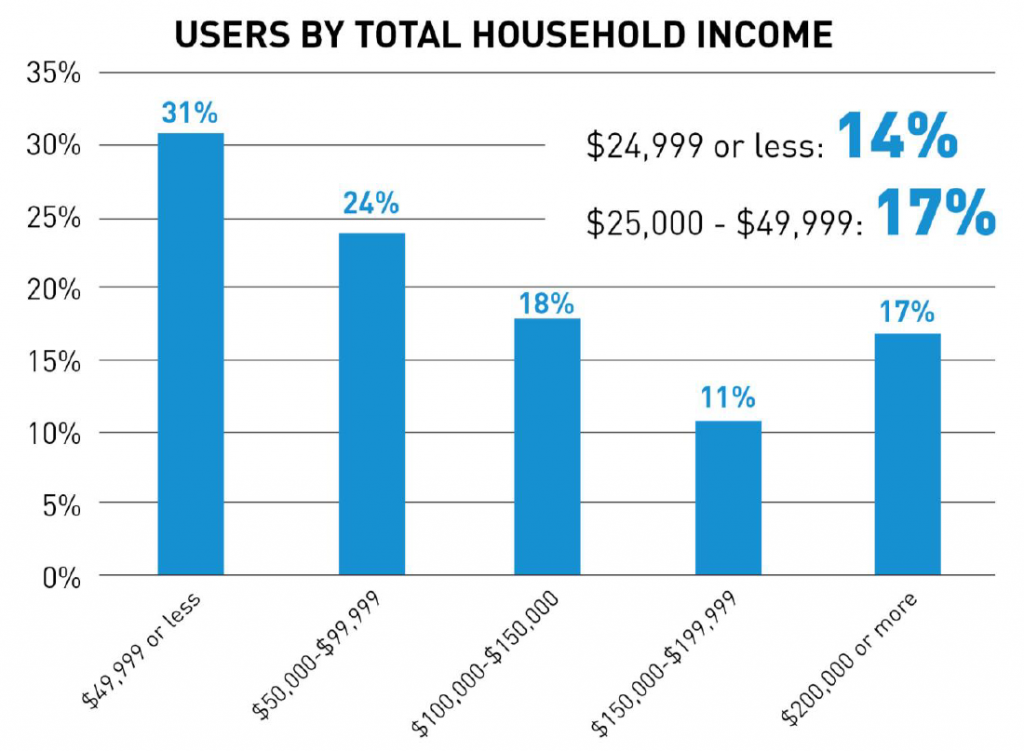 SDOT did not report any data on the availability or uptake of “low barrier” plans.

Permit fees. SDOT did not report on specifics of how much they collected in permit fees. They also did not report (nor did Councilmembers ask) how much was spent on building out additional parking corrals for bikes and scooters around the city, how many were built, and where they were sited.

Let’s return to the safety and injury data for a closer look at the meager scraps that SDOT offered. SDOT said that over the course of the twelve-month pilot, there were 17 police reports filed on scooter-related collisions, including 15 with related injuries and one fatality. To try to minimize the perceived size of those numbers, SDOT compared them with the 8,000 police reports filed (presumably of motor vehicle collisions) during that time. State law requires that any motor vehicle collision involving an injury or more than $1000 in damage must be reported, unless a police officer files a report. No such requirement exists for e-scooters, unless of course the collision involved a motor vehicle. Not surprisingly, all seventeen of the police reports were for collisions involving a motor vehicle. 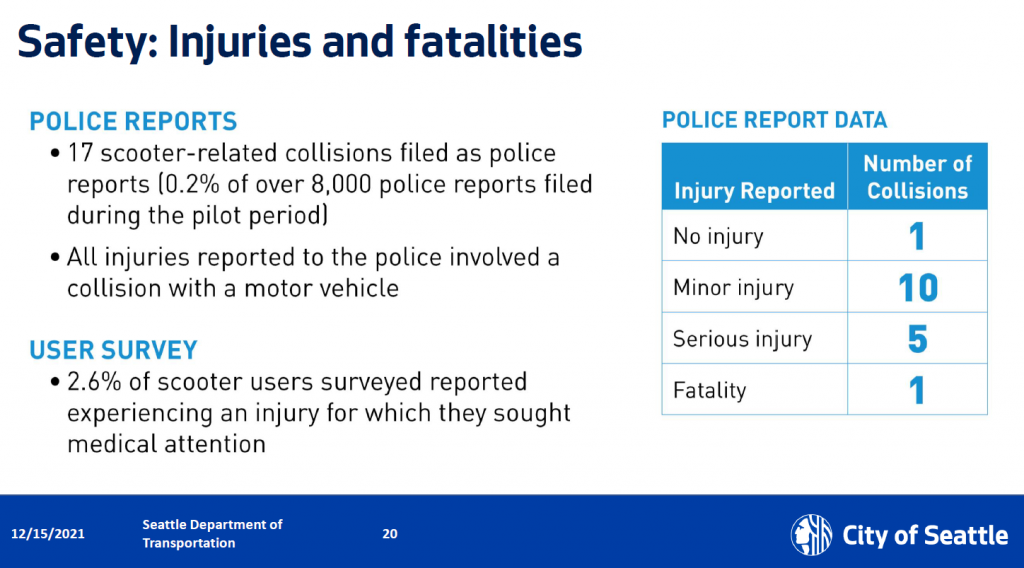 At the same time, SDOT’s survey of 4,141 riders reported that 2.6% of them had sustained an injury requiring medical attention. Just among the survey respondents, that’s 107 injuries. And again, if that 2.6% rate extends to the larger population of scooter-share riders, just within the Lime riders that would be at least 6,833 injuries in twelve months (assuming each of those riders only had one injury).

The federal government tracks motor-vehicle injury and fatality rates, also based upon police reports, so let’s stick with the official low number (even though it’s a clear undercount) and see how it compares. According to the NHTSA, the motor vehicle fatality rate was 1.37 per 100 million vehicle miles travelled (VMT) in 2020 (which as an aside is a large increase from 1.11 in 2019, that has many people concerned).

According to SDOT, there were 1,489,985 scooter trips taken during the scooter-share pilot, with an average trip length of 1.4 miles — that’s 2,085,979 miles. And there has been one fatality already. It’s hard to know how to interpret that; if it’s truly one fatality per 2.08 million miles, then that’s 47.9 fatalities per 100 million VMT compared to 1.37 from motor vehicles — an enormous difference. But with small counts, that may be the wrong conclusion; it’s possible that the real rate is 1 per 100 million VMT, but the one fatality happened to occur at the beginning of the period instead of at the middle or end. But clearly having one fatality already after only 2 million VMT is a very bad sign, one that should be ringing alarm bells at SDOT.

Any way you do the math, the e-scooters are significantly more dangerous than motor vehicles, and it’s difficult to understand how the city can continue to support a program that is so far out of alignment with its ‘Vision Zero” goals. SCC Insight has asked Public Health Seattle-King County for hospital-reported data on scooter-related injuries; PH-SKC is working on a response and this story will be updated with any response received.

This makes SDOT’s feel-good “key takeaways” presented to the City Council tragically comical for its understated perspective on e-scooter safety: “while there have been some injuries and collisions, we will continue to improve education about safety for users and non-users, including drivers.” 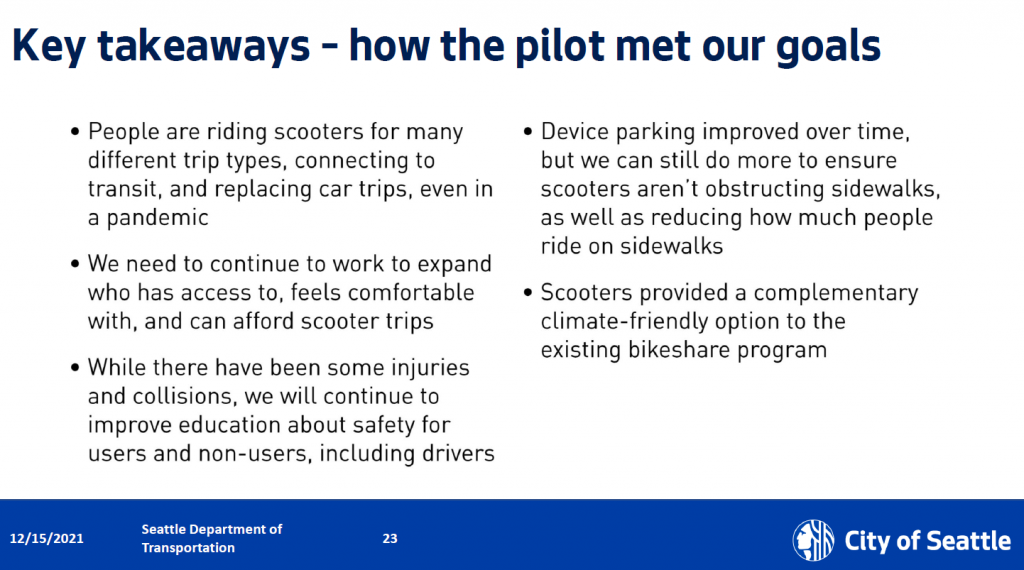 Even more comical is SDOT’s plans to continue the scooter-share program into 2022, despite all the glaring issues and the enormous safety problems, under the belief that continuing their so-called “robust audit program” and expanding public awareness and education will magically solve the problems. 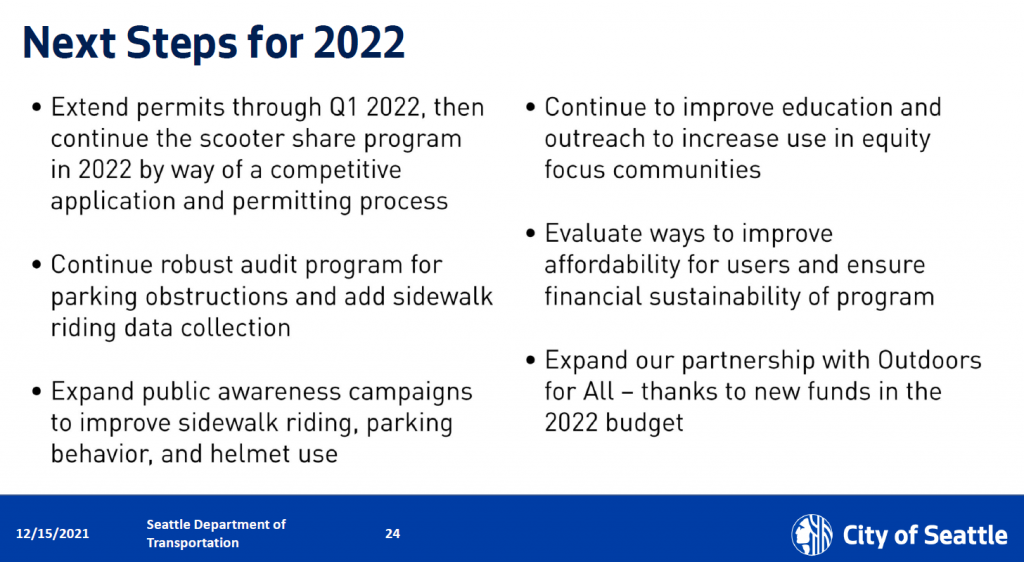 The reality is that this is a broken program. It is expensive, and the discount plan for low-income riders is severely under-utilized. The rules on sidewalks, parking, and helmets are neither followed nor effectively enforced. It is unsafe, and under-studied. Deployment of the fleet is not equitable across the city. And there are many things we still do not know (or SDOT simply chose not to present to the City Council): whether low-barrier plans were implemented, statistics on the condition of the fleet of scooters, how the permit fees were used, and whether the commitment to West Seattle-specific mobility plans was kept.

SDOT expects to deliver a full scooter-share pilot evaluation and report next month. Before the department rolls over the “pilot” into a full-fledged program and extends scooter share into 2022 and beyond with a new set of vendor contracts, the City Council should hold its feet to the fire to ensure that it fully explains how it has met, or failed to meet, each of their original promises, that it puts in place a real data collection program on injuries, and that it devises a real plan, with enforcement, to make it safe for riders and pedestrians.

Thanks for reading!  We hope you found this article valuable.