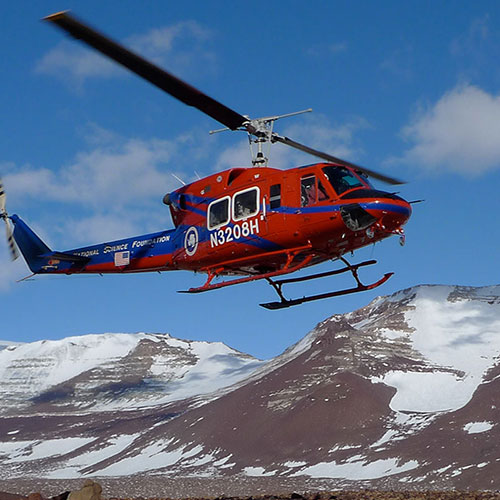 Rock exposures are rare in the icy wastes of Antarctica, but they are the only places where finding fossils is possible. We used helicopters to fly from our base camp, the Central TransAntarctic Mountain (CTAM), on the Beardmore Glacier to the tops of mountains emerging from the surrounding ice in order to find and excavate fossils, sometimes camping out in the Antarctic weather for more than a week at a time.

What we found: Early Triassic

Our team, along with Dr. Roger Smith, a colleague from South Africa, recovered important fossils from the Early Triassic including multiple specimens of Lystrosaurus, a stout little animal with a flat face, tusks, and a beak that was a close relative of mammals. I hope that one of the Lystrosaurus skeletons will eventually be on display at the Burke.

Also from the Early Triassic, we brought back a little skeleton that is thought to belong to Prolacerta, a lizard-like creature that is a close relative of both crocodiles and dinosaurs.