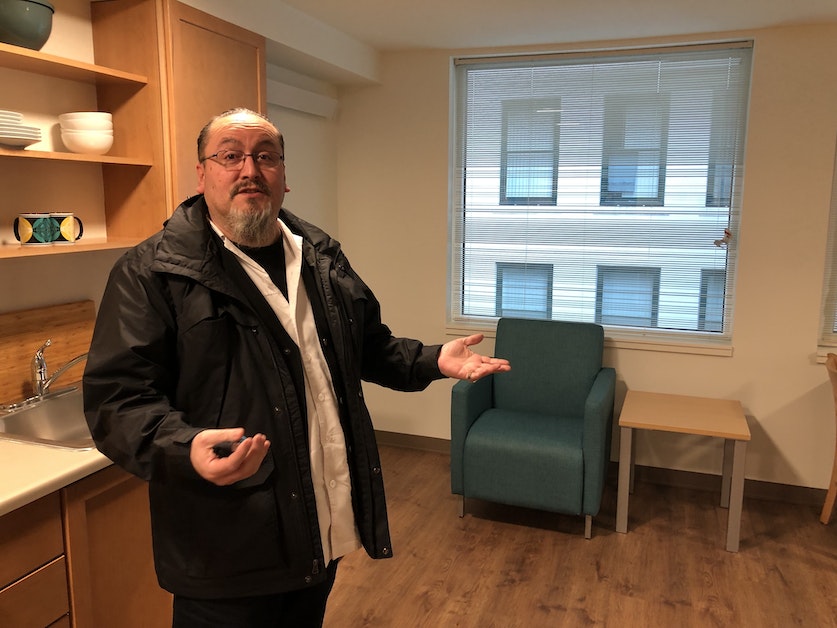 In Seattle’s Pioneer Square this week, new tenants are picking up their keys and getting settled into brand-new studio apartments built by the Chief Seattle Club. And leaders say they have a lot more housing in the pipeline.

The 80-unit apartment building is named “?al?al,” (roughly pronounced “All All” in English). That’s the word for “home” in the Lushootseed language. It will ultimately house up to 96 people, most of them Native Americans and Alaska Natives who have been experiencing homelessness. An average rent is about $250, subsidized with private and government funding.

The building adjoins the Chief Seattle Club’s day center, which for years has offered caseworkers and services to Indigenous people.

“We’ve known we wanted to get into housing for a very long time,” said Derrick Belgarde, executive director of the Chief Seattle Club.

They started with Eagle Village, a modular housing project in Sodo, in 2019. Belgarde said it’s hard for people to recover from trauma in a day-center setting.

“So we knew that we need more, we need something permanent, so our members that are suffering can get into a place of safety, in this case ‘?al?al.’ And then start bringing them that healing, bringing in that cultural component, that spiritual component.”

The building is replete with original artwork, including the façade that depicts canoes traversing the beauty of the Northwest. But other touches, like timers to turn off the stove burners, are meant to provide safety for what Belgarde calls a “high-acuity” population – people dealing with health and substance use challenges.

Belgarde said the Chief Seattle Club has other housing projects in the pipeline including 120 units in Lake City, family and studio housing on the North Seattle College campus, and 63 units of senior housing in Fremont. The new apartment building in Pioneer Square will house adults, mostly in studios but there are some units intended for two people, that could allow adult couples or siblings or caregivers to live together.

Belgarde said there’s still much more to come at that location: the Seattle Indian Health Board will host a health clinic and pharmacy on the ground floor. And the Chief Seattle Club will open a café with an Indigenous-inspired menu, which can eventually offer workforce training.

Belgarde said leaders like Echohawk highlighted the stark disparity in Seattle’s homeless population: Indigenous people make up 1% of the city’s population but 15% of those who are homeless and an even larger share of those chronically homeless.

“People couldn’t sweep it under the rug anymore,” he said.

Meanwhile the Chief Seattle Club began to provide more direct services rather than just offering space for contractors. Now he said services and activities for residents, including drumming circles and sweat lodges, will be offered in-house, and he believes they’ll have success getting people to come inside.

He said the Club has had to strike a difficult balance to abide by federal fair housing laws while providing housing intended to meet the needs of Indigenous people. He said they’ve achieved that by making sure potential tenants were aware of the application process and had help gathering the required documents.